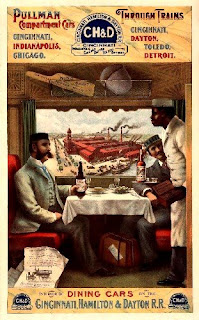 This was supposed to be a post about a trip I took back in 2001 with a couple of friends. A baseball trip done the old school way. All by rail. But as I began to write it became apparent that it was going to be way too long for one simple little blog entry. So I decided to break it up into segments. Then I got bored with that idea. Now I've whittled the whole trip down to one funny experience on the initial train ride out to Milwaukee.

To summarize, I and two of my friends planned a trip to Milwaukee, Chicago, Detroit and Cleveland to see seven games in seven days at five stadiums, and we decided to travel via the rails since one of my friends was fiercely against the idea of flying. And this was pre-9/11. I guess I should give their names, huh? Since we are reveling in our anonymity, let us call my friends The Jew and Bob. The Jew because, well, he's Jewish. And Bob because I couldn't think of a funny nickname for him without slightly giving away his secret identity. He's a superhero, you know.

Here's what happened on the train ride out of NYC:

The Train Incident
This may have been the most fantastic idea ever! We started out in the afternoon from Penn Station in NYC by having a few cocktails at a TGIFs while The Jew went to get our tickets. We had a couple of sleeper car cabins for the trip to Milwaukee, and then again back to NYC from Cleveland. The rest of the train rides were fairly short going from Milwaukee to Chicago to Detroit to Cleveland. If you have never travelled via sleeper car I think you need to do so right away. It's definitely the way to go!

Our "rooms" were right across the way from each other. Bob and I took one and The Jew took the other. Didn't really matter because we weren't planning on sleeping that much. Our car was right behind the Dining Car where we had steak dinners in the evening and a decent breakfast in the morning. White linen tables, little lamps, gracious servers...just like you see in old movies.

Beyond the Dining Car was the Bar Car...our favorite car. I don't know how long they served through the night, but I think it's safe to say that we closed the joint. The Bar Car also had a smoker's lounge...which is important to the rest of the story. The Jew had decided to take up smoking again, but just for this trip. And he did. He was also able to quit again after the week was through. Don't know many folks who could do that, but he's a freak of nature. In more ways than one.

Life in the Sleeper Car was a bit different for us than the rest of the folks travelling that trip. They all had their doors closed and the shades on their windows drawn. We had our doors open, music playing and liquor flowing. I brought a bottle of Jose Cuervo Reserva de la Familia tequila with me, and we finished off most of that bad boy off on the way to Milwaukee. That and the many, many beers we kept getting from the Bar Car. We were the hit of the trip! Only 2 or 3 complaints from the rest of the passengers...not bad. Actually I was hoping that more of them would be partying, but alas no. A couple of the porters working on the train hung out with us for a while, but I'm not really sure they were supposed to be doing that. Sneaked (snuck?) a few beers here and there with us, and I don't think anyone got hurt.

The Jew, however, made a friend in the smoker's lounge. She was an attractive, young black woman who was heading back home to Detroit after visiting some family in NYC. I hope I don't come across as racist here (and really, how could I in a story where one of the characters is called "The Jew"?), but her name may have been something like Shaquila or Shanaynay. I'm not making that up! She was a lot of fun. Wound up hanging out with us back at our cabins for a good part of the trip because we had some extra room, some extra booze and we were being extra friendly.

Through a drunken haze, I notice the top of a tattoo on her hip right above her jeans. I asked about it because I dig tattoos. I expect her to tell me what it was, and maybe pull down her jeans a little. Not Shaquila. She squeals with excitement and says "Oooo, you wanna see it?" At which point she unzips her jeans and drops them to the floor. She's now in front of me in the tiniest g-string I have ever seen in my life. She moves in close to give me a good look, then she turns around to show me another tattoo on her ass cheek. Did I mention the tiny g-string?

I look over and see that Bob is staring with his mouth open and the Jew is absolutely cracking up. I decide to ask "So Shaquila...what is it that you do for work in Detroit?". She replies "Oh, didn't The Jew tell you? I'm an exotic dancer." Aha...it all makes sense now. The Jew knew she was a stripper from the get-go, but decided to leave that salient detail back in the smoking lounge so he could have a bit of fun with us.

The rest of the trip was spent getting even more drunk with our new stripper friend. She liked the vodka...a lot. There was dancing, smoking, tequila shots...maybe even a free lap dance or two. I don't remember the exact details surrounding bed-time, but Bob and I retired to our cabin and somehow figured out the complexities of the sleeper car bunk-bed system. It wasn't easy.

The Jew, being the gentleman that he is, offered his extra bunk to Shaquila. We still had 6 hours or so before we reached Detroit and she had only a coach ticket so she jumped at the chance. Jumped right out of her clothing, as The Jew told us the next morning. He had no intention of bedding the young lady, he honestly was just being nice. But she offered to keep him company in his bunk nonetheless. He politely said "No thanks", or at least that's what he told us he said. Who knows what happened in that sleeper car cabin on that warm July night in 2001.

He did tell us a few things that may or may not have happened. Once he sobered up, he realized that there was a naked, very young stripper in his cabin and it freaked him out. He spent half the night huddled on his bunk, clutching all his earthly belongings. Well, at least the ones he brought with him on that trip. He kept his hands on his wallet the whole night. He was also horrified when she jumped down from the top bunk, fully nude, and had a pee right there in front of him on the toilet/sink combo thingie. Did I mention that he's a bit of a germaphobe? He finally drifted off to sleep at one point, only to be awakened by her trying to unzip his pants so she could give him a "thank you" BJ. Once again, he said he politely declined. He said.

He woke us up after she departed from the train in Detroit to tell us how the rest of the evening went. Also, it was time for breakfast. She left us her name and number and the strip club she was working at in Detroit, but she told us to be sure to call her first if we were going to go there on the Detroit portion of our trip. Not a lot of "white boys" went to her place, and if she knew we were coming she could have the bouncers look out for us.

But a part of me wishes that we did. Just for the stories we could tell. That was the first day of our trip and we hadn't even seen any of the cities we were visiting or watched an inning of baseball. But what a way to start the trip off with class, eh?
Pissed in the corner by Verdant Earl at 8:37 PM

I've only travelled on a sleeper train once and didn't have anything like as much fun. It was from Sydney to Melbourne and I was in the upper bunk. The bunk was very narrow and it felt like hanging on to a plank half way up a cliff. I didn't get much sleep. Oh, and no strippers...

WR - Ours was actually a little room with two lounge chairs, a desk area, and the wonderful sink/loo combo. The chairs folded down to a bunk and the upper bunk folded down from an overhead compartment. Not too shabby.

Slyde - I agree about Milwaukee, but the sleeper car was great fun.

I have said it before....the train is definitely the way to go.....and traveling first class on a sleeper car is the Ritz.

Seriously, my resolution this year is to do more things just for the story.

And really, trips that start off with class = boring.

So, obviously all the "real" action was actually happening in yours and Bob's room...

G-boobs - Yeah, you need a little depravity to start off any good trip.

AK - You see, THAT should have been the punchline to the entire story. Well done, I say...well done! ;)

"He spent half the night huddled on his bunk, clutching all his earthly belongings."

Poor guy! He was scared of the naked stripper...

When she first pulled her trousers down and showed you guys her ass you must have been seriously shocked!

Sound like a good trip. I'm waiting impatiently for the next part xx

Elise - the rest of it isn't nearly as fun. I'll attempt some kind of summary.