So last night we were watching Amityville II: The Possession on Monster HD. Don't judge us! Anyway, neither of us had seen it in over 20 years, and the decades haven't been good to this one. Let me tell you. Or have they? 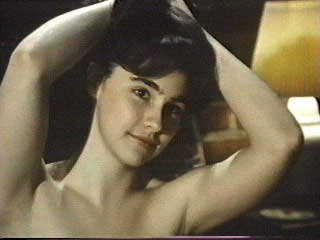 You're imagining it...aren't you? Sickos!
Pissed in the corner by Verdant Earl at 12:01 AM

Ah, LOL! I loved MST3K - what a great show! It used to crack me up all the time. I forget a lot of this movie but maybe I should go back and watch it again. I love going back and re-watching old movies like that. So many things to make fun of! Oh, and hey - that's the same actress that was in Last American Virgin, isn't it?

Teeni - Weird...Gia said the same think about the actress being in The Last American Version. I asked if she meant Better Off Dead, and she said yeah...that's the movie she was thinking of. Turns out she WAS in Last American Virgin as well. A bunch of smarties, you are. ;)

Oh hell yeah I am. I remember this one, LOL.

And dear God...i second the eeewwww!!!

Avitable - I wonder if he misses us?

I'll have to put this one on my list !

speaking of amityville 2, its been so long since i saw those movies.

im trying to remember... is that the one that ended where they found a well going into Hell in their basement? it was either 2 or 3...

Horror films....I never could figure out why people like these, unless some folks get an orgasimic rush from the release of adrenilin or something. The only one I ever liked was "The Shinning" and that was because of Kubrick. (and Jack Nickelson)

"You can imagine where the evening goes from there."

I'll just show myself out, thanks.

Heff - if only for the bro/sis scene, right?

Lotus - The Shining was great...better than the book, in my opinion. But not nearly the camp/thrills of something like this. Horror rules!

It's your favorite dirty uncle. Remember...It's not incest if the devil has your cock.

Hey you're the one that posted it don't blame me for imagining it.

Evyl - I can't be held responsible for what I post. The Devil made me do it. ;)

That chick was so hot in the movie.