Let me explain that a bit. According to racial statistics, there are less black players in professional baseball today than there were 30 years ago. Now that might seem like a fallacy considering the overall number of "brown" faces in the league today, but many of those men are considered to be Hispanic or Latino. Not black.

I called bullshit. And I am the whitest white dude ever to walk the face of the Earth, so that means that I am most likely wrong and possibly even a bit racist. At the very least I will probably sound a bit stupid, but here goes anyway.

My argument to Gia was that while I agree that there seems to be less black players in the game than there used to be, there are still plenty of black players in the game today. On the Yankees, look at Robinson Cano or Melky Cabrera or Mariano Rivera. I believe that racially, all of these men could be considered to be black.  Not making any judgements on them, just stating my opinion on their race.

She countered that by saying that both Cano and Cabrera are from the Dominican Republic and Rivera is from Panama. They all speak Spanish as well, so that makes them Hispanic, not black. I don't really get that. Since when does where you are from (in the Western Hemisphere at least) and what language you speak help define your race?

I guess the question of race is an ambiguous one today anyway. How does one define race? Is it an anthropological distinction or a cultural distinction? I dunno, but the real crux of the argument over the lack of black players in the major leagues was the lack of African-American players in the major leagues. Aha! Now we are getting somewhere. That goes toward a more societal question of why young Black men in this country have stopped playing baseball.  And I don't have a real good answer for that. 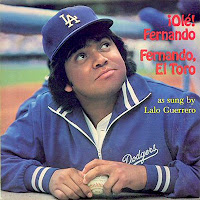 I gave Gia three men who have all played baseball either currently or in the past.  Alex Rodriguez, Fernando Valenzuela and David Ortiz.  Then I asked her what race she would categorize each of them as.  She chose Hispanic for all three men and I went nuts again.  Sure, culturally they are all Hispanic.  A-Rod and Ortiz are both Dominican and Fernando is Mexican.  But the common tie of language is all that they share.  What would be more accurate is to say that all three men are of mixed race.  A-Rod clearly has some European features while Ortiz could be classified as being black or African-Dominican.  And Fernando shares a lot of traits with the indigenous people of the Americas.

So we continued arguing about whether or not being Hispanic was a racial sub-division and we both became too tired to really give a shit about it eventually.  Honestly, there is nothing I find more uncomfortable than a form that asks you about your race.  White, Black, Asian, Hispanic, Other.  We spend so much time defining one another, categorizing ourselves that it might contribute to actually keeping us apart.  Who really gives a crap, anyway?  And yet there I was arguing about it with the woman I love.  And here I am writing about it the next day.

What does it all mean and when is it all gonna go away?  People have pride in their backgrounds and where their family comes from.  I have a tattoo of my family's traditional crest from Ireland on my leg.  And yet in other ways I don't care about that shit at all.

One of these days down the line, maybe hundreds, maybe thousands of years from now, we are all going to belong to the same race.  The Human Race.  If we don't fuck it all up first, that is.

The Human Race and Running Races are the only Race I want to be a part of!!!

Also, you blog is the first blog I read before my run each day!! I wonder why?

I always considered people from places like the Caribbean to typically be black. Haiti, the Bahamas, Jamaica, Cayman, Antigua, etc. - they're all predominantly black.

However, I'd say that people from Cuba, Puerto Rico, and the Dominican Republic are predominantly Hispanic.

an age old discussion...if you can get to the bottom if it you will have solved one of the human races oldest problems...tonights topic should be perfomance enhancing drugs...is it cheating?

Avitable - But there are exceptions to the rule. Look at David Ortiz there on the right. And there are light-skinned Cubans (Desi Arnaz) and dark-skinned Cubans (Orlando Hernandez aka El Duque). I think my first point was that you could be white or black or some combination. It doesn't matter what "nationality" you are. Race has nothing to do with nationality. Then my second point was "who cares anyway".

2abes - Phew! I think it is, but I also think it was semi-sanctioned by baseball for a while so how do you punish these guys for using?

As long as we can keep the Irish out of the game. That's really all that matters.

I am not sure what you are arguing here-is it to define ethnicity from an anthropological point of view versus cultural?

If so, I say there needs to be a blend. But, at the same time, it is important to recognize all the different facets of our make up. Not only where on the earth we came from, or the culture which we were raised, but the dynamics within our family or origin, our family of now. It's important to know who you are. :)

We are all different and that is super! (hee hee-that's a line from big gay Al (southpark))

Holly - yes, that was my initial point. Then it was that we should move past that, but you are saying it IS important where we come from. Racially, culturally, etc... I guess. I dunno.

I think the question should have been: 30 or 40 years ago would Alex Rodriguez, Fernando Valenzuela and David Ortiz been classified as black? I think the answer is yes, even though today they typically are not.

Also I think that football is sucking up alot of the black population that might have played baseball since that sport has gotten much more organized throughout the years, from peewee to college

I'm pretty sure the guys in those pictures are Asian..

Ookami - I don't know about that. A-Rod and Fernando would probably have been able to play in the majors prior to Jackie Robinson. No way for Ortiz. And besides football, basketball has become a huge draw for young black men in this country. Huge.

Slyde - And they were speaking a different language. I'm pretty sure it was Asian!

Heff - I dunno. It disappeared from television a few years ago. Who knows what is going on in the NHL. ;)

Hmmm, the question begs for introspection...While both of you make valid points, your agrument for anthropoligical definitions vs cultural one is a good one.

The key may be in our definition of "black" and why we feel the need to define that word at all.

To be honest, I don't really give a good god damn what Ortiz is as long as he keeps hitting home runs. Thank you Jesus.

Have a Safe and Wonderful Holiday!

Jenn - it comes kinda close to that, doesn't it? One of the reasons I hesitated writing it. But I just said fuck it!

My best friend growing up was Cuban. She was not black, and was definitely Hispanic. (Lighter skin, "white" hair, etc.) She and her family were very careful to distinguish themselves from other Cubans that appeared "black." And I don't think her family was exceptionally racist.

A person can be black AND hispanic, however, because "black" is more than just a racial characteristic and also a socio-cultural characteristic, I don't think a person can just dismiss someone's blackness and say they're Hispanic.

And this convoluted comment means that I agree with you.

In Texas there is a great increase in the hickspanic race.

Evyl - I dig them hickspanics. Good bbq and good mexican food. Nothing wrong with that.

Just wait another 100 years or so. Were all gonna be tan, brown eyed, brunettes anyway.