So I was first woken up by the cats at 5AM this morning as they decided to have a wrasslin' match on my head. Then about an hour later, as I had just fallen back asleep, my nephew started texting me using his mother's phone. Important stuff like "Your butt smells". Then the cats started up again.  This went on for a couple of hours.

I finally was able to fall back asleep when our neighbor began shooting his cannon...yes, his cannon...over the harbor in remembrance of the men and women who served this country and lost their lives.  They were blanks, in case you were wondering.  Loud-as-fuck blanks.

And here I thought Memorial Day meant you could sleep in late on a Monday in early Summer.

UPDATE - What the fuck?  I never thought I would see the day that the Yankees would wear red caps.  This was mandated by MLB, by the way.  Every team is wearing red caps today.  No way Team Steinbrenner makes this choice on their own.  Feh. 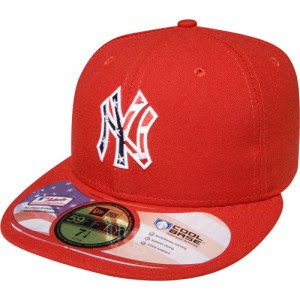 "It's just one of those days when you don't wanna wake up.  Everything is fucked, everybody sucks, you don't really know why but you wanna justify ripping someone's head off!" - Fred Durst

Hey, if a guy can't shoot off his cannon, what kind of holiday is it ???

Heff - I just wished he waited another hour or so is all. Actually, I thought it was kinda cool. Just too early.

Hahahaha, neighbor shooting a cannon... are you sure you're not living in some weird 70s TV sitcom. That plot line was once in Green Acres, I think.

Faiqa - Oh, I'm positive that I'm living in some weird 70's sitcom. Just not sure which one. All in the Family is a strong contender at this point.

note to self: teach Mac to text

and get a cannon

happy memorial day to you too!


and yes, the butt, it smells!

the phone started ringing at 0500h here, sugar, so i am so feelin y'alls pain. *sigh* xoxoxo

Those hats suck almost as much as Fred Durst.

Limpy - Nothing sucks as much as Fred Durst.

Did you get my text? It simply said "YOU SMELL GREEN MAN!!!"

Michelle - and the color of the enemy!

"wrasslin' match on my head" cracks me up. no matter how else i wanna comment i keep coming back to that and laughing.