But I want an Oompa Loompa now!!!!

You know what I hate?

When I can't find a video of something I really want to see anywhere on the Internets. I fucking hate that! In this day and age you would think that anything that has been filmed or recorded since the time of Louis Lumiere* would be online somewhere. And most of it is.

But every once in a while I search for something and barely find a mention of it, much less a video. 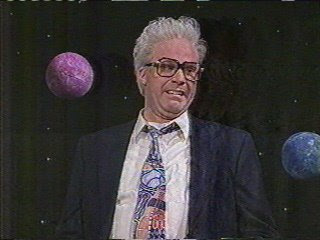 We have been obsessed with Harry Caray lately. For those of you who don't know, Harry was a baseball announcer with the St. Louis Cardinals, Oakland A's and Chicago White Sox. But his last job with the Chicago Cubs is what he is mostly remembered for. He passed away in 1998, but comedians like Will Ferrell are still doing impersonations of him. And the real Harry was often just as funny.

In 1998, Will Ferrell did an impersonation of Harry at the ESPY Awards. I tell people about this all the time. He rips into Tiger Woods and a bunch of other athletes, but it is his comments about John Elway that makes it legendary. Yelling stuff like "how come he doesn't get his teeth fixed" and such. It was sooo uncomfortable to watch Elway's reaction to it. Like I said, legendary.

Except the legend has apparently died. You can't find video of this bit anywhere on the web. You can barely find a mention of it. Some intrepid soul put the audio of it on YouTube a while ago, but it has since been taken down.  It should be available on ESPN somewhere, but...no, it isn't.

Come on, Internets! Get your act together!

*There is your obscure reference of the day.  You are welcome. - Earl

"I don't know what the big deal about CrackerJack[sic] is. Didja ever go and buy a pack of CrackerJack[sic] thinkin' you'd get a prize and find no prize in the box?...
...Here's the pitch...
...That might not sound important to some people, but when you're a little kid, especially from humble origin and they cheat you out of a prize...
...There's a bouncing ball. Second baseman has the ball. Barbarri over to first...
...It's hard to think in laudatory terms of the product."I'm not necessarily a fan of linking within comments, but there is a reason why Harry is impersonated the world over. Care enough to hear the man in action for yourself? Click HEREHoly Cow!

I went through a similar experience with an SNL skit featuring Christopher Walken and Ferrell... "Cowbell, gimme more cowbell." I think I finally found it, but it was crappy quality.

WLC - "What an asinine promotion!" Love that shit!

Faiqa - Sucks, doesn't it? At least crappy versions of the cowbell skit can be found. Nada on this one.

Yep, this has def happened to me before also. I find some of the shit is listed and when you go there it's been removed for copyright and all that. Like it's really costing them/losing them any money. Damn you Metallica!

At least its not being censored...theres a whole catalog of stuff including the "Little Rascals" thats been held from the public. That drives me mad

Regarding the question in your note..."I would. Heck, I'd have seconds, and I'd wash it all down with a tall,cool Budweiser."

That makes me SO mad... My daughter and I used to be able to watch this really old cartoon (Owl Jolson) on Youtube, and we loved it. Watched it many, many times. Then they took it down. Why?
Sucks.
The trivia is leaving me feeling incredibly stupid. And slow. I am answering too slowly, apparently!

Wil - I say "Damn Metallica" for many, many reasons. Lars is such a tool.

badger - that's because you are a smarty-pants.

2abes - Blame Bill Cosby for the Little Rascals thing. Pretty sure I heard he bought up all the rights and has withheld releasing them because some of them were so racist. I could be wrong there.

Paticus - For the win! Nicely done.

i used to LOVE when WF did HC... always made me laugh..

Did you try HULU ?

CRAP...sounds like a funny video. Now get out there and keep looking for it!

Heff - ESPN isn't one of the networks carried by Hulu. Yeah, it was one of the first places I looked. But alas...no.

Jenn - NO! You look for it! That's why I wrote this post, so that someone out there would find if for me. Get it?

You are whining about not being able to find an old comedy clip about a dead sports announcer.....? Have you been taking your medication on a regular basis the way you are supposed to?

Bruce - yes. That is exactly what I am whining about. And no, I may have skipped a few days.