Something in yesterday's comment section made think about food that I used to eat that I don't anymore, for one reason or the other. 2abes mentioned his disdain for turkey bacon and I generally would have to agree with that.  Except that there was a period of time when I would only eat turkey bacon.  Louis Rich turkey bacon, to be specific.

It was delicious, AND it actually tasted like bacon!  Bonus!  But for some reason I stopped buying it.  Then I stopped seeing it in the market.  I assumed that the company went out of business, leaving the turkey bacon industry up to the likes of Oscar Meyer and Butterball.  (A quick aside: Butterball turkey bacon shouldn't even be allowed to be called food.  It is the most awful product on the face of the Earth.  Stay away!)

But today I did a little research and I found that Oscar Meyer turkey bacon IS Louis Rich turkey bacon!  They must have purchased the brand or something, because I would never have known to look for the little "Louis Rich" label under the giant "Oscar Meyer" label.  Another example of big business taking down the small fry.

Will I try it again?  Maybe...just to see if it is as good as I remembered.  But turkey bacon doesn't kill you as quickly as regular bacon and everyone who loves bacon knows the pleasure/pain dilemma of which I speak.  Bacon is tasty that you don't mind that it is actually killing you.  I don't think you get that with turkey bacon. 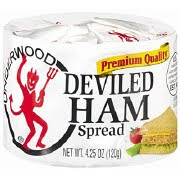 So this led me to think about other forgotten foods from the past and the first thing that popped into my brain was Underwood Deviled Ham.  It's still out there and it's still in an aluminum can covered in paper.  Like something ripped from my childhood memories in all it's gory detail.

When I was a kid I think we always had a few cans of this stuff sitting in the cupboard.  I don't think we ate it all that often, because...well, it looked like cat food, to be totally honest.  And it had that small layer of congealed fat on top of the spread that you would always have to scrape off before you could begin digging in.

I'm normally not a big fan of food products that require you to scrape off a layer of congealed fat before you can begin digging in.

But there was always something, um...tasty about Underwood Deviled Ham.  I checked out the ingredients and they seemed harmless enough.  Ham (cured with water, salt, brown sugar and sodium nitrate) and seasoning (mustard flour, spices and tumeric).  That's it.  OK, I'm not too sure about sodium nitrate and "spices" seems a big generic for me, but still.

Anyway, would you believe that out of the blue I actually purchased some last week?  It's true!  I think its the first time in my adult life that I've had Underwood Deviled Ham.  I was even a bit embarrassed to place it on the conveyor upon checkout.  Was anyone watching?  Would anyone even know what this paper-wrapped can contained?  How could I hide my shame without shoplifting?

But I somehow made it throught checkout intact, and I hurried home with my childhood memories surging and immediately showed my find to Gia.  Her face lit up as it had been this side of forever since she had tried it either.  I bought it because we wanted a meal of dips, fruits, pickled things and cured meats that night.  And on some weird impulse, I was able to find it.

We set up our meal with dishes of hummus, eggplant, cheeses, smoked sausage, crackers and stuffed peppers and I happily tore into the wrapping of the deviled ham.  There it was...the congealed layer of fat that I always loathed.  I shamefully slunk into the kitchen to scrape it off into the garbage.  Along with a thin layer of my soul, or so it seemed.  What was I doing eating Underwood Deviled Ham?

But it really wasn't bad, I'm sorry to report.  Nothing great, nothing awful.  Just so-so.  In fact, I think they must have changed the recipe because it wasn't as spicy or salty as I remembered.  Which was fine, because there was probably much too much salt in it anyway.  But it just didn't have that tang that I remembered from my childhood.  A little disappointing.

How about you?  Any semi-forgotten foods from you childhood that you secretely yearn for?

holy crap, i had that alot as a kid, but probably haven't had it since the 70's. 2 other products i still get are fluff, yep, i still enjoy a peanut butter and fluff sandwich from time to time. i catch a lot of shit for getting spam. i flat out love the stuff. fry it then scramble a couple of eggs over it, put it on a roll with eggs over easy...

I don't think there are any foods from my childhood that I yearn for. I still buy all that stuff! :)

One of my first memories of a "type" of food that I remember was when my mom used to give me Chewel's Cinnamon Gum. It had an ooey-gooey liquid center that exploded in my mouth. Normally, I don't condone things exploding in my mouth...but I always made an exception when mom said, "Gum?"

I used to eat, I think they were called, Penrose sausages with my dad. Like, spicy little weiners out of a jar. We'd eat them with saltine crackers and I LOVED them.
I am not sure I'd even want to try them now - IF I could even find them!

2abes - I did a whole post on Fluff about a year ago. Great stuff!

Avitable - you are the zen master!

Sybil - Never heard of them, but I think I want them now. RIGHT NOW!!!

K, first,
I buy Hormel microwave bacon. 4 strips in the micro, 5 mins and you have deelish, satisfying bacon. So easy, even my kids can do it without the mess.

All I can think of is when we were kids my sisters used to make us round macaroni and then mix it with tomato soup. Not bad at all, really. Haven't thought about that in years...

Candy - scroll down a few posts. I've got a Taiwanese spam/stalker.

if you could somehow combine baseball and food together into 1 product, i think you would combust into an orgasmic pool of spunk...

I LOVED that Deviled Ham spread. AND the canned cheese spray. What were we thinking? I wouldn't eat that squirt cheese now if you paid me.

Thanks for memory lane!

Oh and don't forget about the canned sardines on a cracker while watching football on Sunday afternoon's! Loved opening that can with that key!

Let me see - when I was a kid I LOVED sardines with mustard sauce. No one else in my family liked them, so I would buy them on my own, with my money, and would sit at the table and devour the whole tin. I got some a few years back . . . meh. Not as good as I remembered.

Some childhood memories probably shouldn't be tampered with.

Carbury eggs. The original ones.

When my brother and I would wake up on easter morning, we would count our cadbury eggs in our basket. The easter bunny always very good about making sure we each had 3.

Nowadays, well, the cadbury eggs. they just don't taste like they use too. gah.

Now WHO told you to scrape the congealed fat off the top ? That adds to the "spreadability factor" !

I use to love Deviled Ham & Mustard sandwiches. Think I'll go home and have one.

P.S. - I think the recipe is still the same, and your tastebuds have probably just matured.

Jenn - Never tried the canned sardines, but I know of the key that you speak of. Did you eat them whole?

Holly - I never liked Cadbury Eggs. Too gloopy for my tastes.

Heff - So do you just mix the congealed fat in with the rest of the spread? My God, man!

Exactly. Pure HELL in every can !

I swear to God I was thinking about Underwood deviled ham yesterday and I haben't heard the name in years.

"There it was...the congealed layer of fat that I always loathed. I shamefully slunk into the kitchen to scrape it off into the garbage. Along with a thin layer of my soul, or so it seemed."

This sir, may have been your fienst writing ever. It captures perfectly the essence of what it was for me to open my paper bag lunch at school only yo discover that my mother had once again dealt me the joker of all sandwiches, deviled ham on wheat bread.

I also remember really liking cream cheese with olives. I have no idea where I would find that now.

Limpy - You are in CT, right? If you have a NY-style bagel shop worth a damn in your neck of the woods than they should have cream cheese with olives. I should know. I have an everything bagel with cream cheese and olives about 3 or 4 days out of the week. In fact, I'm gonna go get me some right now!