Disclaimer A: This post is part of Stacie Ponder's Final Girl Film Club. She picks a film, oftimes obscure, and the cooler sheep in her flock watch the flick and review it on their blogs.  It's like a mini-meme.  Wait, what?

Disclaimer B: I didn't work very hard on this review.  Well, I did actually.  But I did the work over four years ago.  This was one of my very early blog posts back before I even had a blog.  How does that happen?  Well I started blogging over on Slyde's blog when he first started out and he wasn't posting very often.  So, like the good egg that I am, I started helping him out.  I think it will be fun to see how different my writing style was back then.  I've become a bit more snarky over the years.  So I'm going to re-read it along with y'all and add some editorial comments in parenthesis when I come across anything that really makes me squirm.  Fun, right? 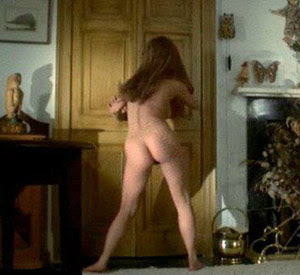 Did that get your attention?

Hey kids! Have you ever watched a film and decided that you didn't really like and/or understand it at first only to decide at a later time that you actually did like it and that it has gotten under your skin a bit? This happens to me an awful lot. It happened just recently with a so-called classic horror film called The Wicker Man from 1973. As you know, both Slyde and I are big fans of the horror genre, but neither of us had ever seen this gem until I had the chance to purchase the DVD sometime last week.

Let me give you a brief set-up to the movie. In modern day (early 70's) Scotland, a policeman (Edward Woodward) from the mainland is lured to a small island in the Hebrides to investigate the disappearance of a young girl. He encounters a strange group of villagers who act as if they had never seen the girl before. He also encounters the islander's strange religious and sexual practices which is disconcerting to him as he is a devout (and quite repressed) Christian. Suspecting that the girl has been sacrificed or is about to be sacrificed as part of some neo-pagan ritual, he stays on the island in an effort to save the young lass. I'll not go any further in case any of you haven't seen the film yet, but let's just say things start to go awry for our young, repressed hero.

I'm not quite sure why I gave it a thumbs-down after my first viewing. It surely wasn't what I expected. There were horror elements to be sure (Ed. - nice use of "sure" and surely" in back to back sentences), but I certainly wouldn't classify it solely as a horror film. The first half of the film played out almost as a musical, if you can believe that. There were songs sung in pubs, in fields, around the maypole, and even one extraordinarily strange seduction sung by the landlord's daughter to the policeman while in different rooms! It also didn't go a long way towards explaining some of the strange imagery on the island, but I guess at that point I had already semi-given up on the film.

That next day, however, I found that it HAD gotten under my skin a little. I began to research a little of the background of the film and it started to fascinate me even more. You see, this film was the brainchild of writer Anthony Shaffer, director Robin Hardy and star Christopher Lee. In fact, Lee was not paid a dime for his acting in this film although he continues to call it his favorite film that he had ever worked in. This project was very close to his heart and he wanted to see it completed. Had he accepted his normal fee the film may never have gotten off the ground. Mr. Shaffer had wanted to do a smart, contemporary British horror film which then turned into a morality play, and partly made that weird left turn into musical/drama. The studio which had made the film (British Lion, I believe) was sold soon after shooting had completed and the new head of the studio, Michael Deeley, was not quite sold on the film. In fact, after an early viewing of the film with Shaffer and Lee, he asked them what they thought of it. They believed that it was one of the finest things that either of them had worked on. He replied that it was quite possibly the worst film he had ever seen.

Well, if the head of your studio believes that about your film it ain't gonna be easy to get them to distribute it. They tried to convince Roger Corman to distribute it in the US, but his offer was too low for the studio to accept. It soon found another distributor, but without the clout that Corman could bring to the table the film quickly shot to obscurity even though it drew rave reviews. However, it soon began to rise in the underground as a cult classic. Theaters were playing the film at midnight showings to sold-out audiences. With the advent of VHS (and DVD later on) the legend of the film has continued to grow. There are fanzines, websites and festivals dedicated to the film. One disappointing note is that the original negative to the film has been lost to history. It is believed that it was accidentally included in some garbage that was used for landfill in England's M3 motorway. Mr. Lee deduces that was a direct result of the dislike that Mr. Deeley had for the film!

So, with new information in hand I decided to watch the film a second time and damn if I didn't love it this time around! Even the weird musical scenes were a delight to watch. And the conflict between the repressed Christian ideology of Woodward and the neo-pagan joy of the villagers was especially juicy to behold. Britt Ekland (dubbed by Annie Ross to portray a Scottish accent), Ingrid Pitt (strangely, the producers kept her Polish accent) and Diane Cilento were all beautiful and quite magnetic on the screen. But it was the thoroughly delightful Christopher Lee as Lord Summerisle that stole the show. He was funny, thoughtful, smart and not at all outwardly evil as the ringleader of the neo-pagans. A very different Lee than the one I had grown up on when he was doing all those Hammer horror films. He didn't look so awful in a dress towards the end of the film either. I guess you have to see the film to understand that last bit.

(Ed. Okay, there was a paragraph here on the upcoming, at the time, remake with Nic Cage.  It was just me griping about taking the film out of Scotland and putting the awful Cage in it.  Turns out it was a hysterical comedic take on the film.  Wait...you mean it wasn't supposed to be funny?  Oh, I beg to differ!)

Anyway, as I stated in the opening sentence, I like when a film gets under my skin a bit. This one had me researching Celtic pagan rituals which ain't so easy since the history is murky at best. You see there was no written documentation of these rituals, so what remains today sometimes feels like a bad game of telephone...but played over a couple of thousand years instead of whispered around the room at a party. The maypole, the fire dance, John Barleycorn and the Wicker Man itself all are a part of early pagan practices although any specifics are hard to come by. This film left me wanting more, and I think that is one of the marks of a truly great piece of art.

(Ed. - I guess it's not too different than the way I currently write.  Maybe a bit less douchey, but not so different.  Hmm)

Note: Remember to play the Bug-Eyed Trivia Challenge every day. All the neo-pagan Scots are doing it.
Pissed in the corner by Verdant Earl at 12:01 AM

Thanks for reminding me of that wonderful movie. I saw it for the first time last year and absolutely loved it. I happened to have some Scottish friends and had lots of fun ribbing them about it and talking to them seriously about those isolated islands.

did you write something here? i can't get past the photo.
:)

I have to confess I saw it in the 70s. never knew Britt Ekland was dubbed, though.

And the film? Watchable.

Wabbit - I think she had a body double for some of those nude dance scenes though. If you look carefully (and I did), she had different hair when they showed her from behind. Ahem.

yep, Britt had a body double for the dance scene. Supposedly, she filmed the scene all the way though first, then they brought in a body double and filmed it again. Between using a body double and being dubbed, makes you almost wonder if she was only in the film cuz she was wellknown at the time.

We sing a song at the House of Hall, called the "butt cheek love" song.

To the tune of Macho, Macho Man by the YMCA- it goes like this:

not YMCA the village people! gah.

Anon - that's what I thought.

Hmmm, now I am debating whether or not I want to watch it or just read the sysnpsis on IMDB.

Bruce - I highly recommend the film. It's too weird to pass on.