It WILL happen again. It's just a matter of when. - Narrator (Chuck Heston), Armageddon 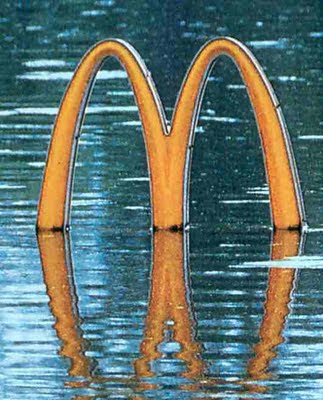 I don't think it's a stretch to say that The Day After Tomorrow might be one of the most ridiculous films ever made.  From a scientific viewpoint, I mean.  In a nutshell, the film is about a massive Ice Age that is brought on by global warming not over a period of centuries or millenia, but over a period of months or days.  The film was greeted with catcalls from those who think they know better.  Massive climate change just doesn't happen that way.

Except, ya know, maybe it does.

Turns out that the last mini-Ice Age called "The Big Freeze" or the Younger Dryas which occurred around 13,000 years ago may have gone from zero to freeze in a period as small as two months.  A bunch of Canadian scientists recently have completed some research in which they have determined that this particular mini-Ice Age was caused by switching off the North Atlantic circulation due to a large infusion of cold, fresh water into the Atlantic.

This was caused by an ancient lake in Central Canada called Lake Agassiz which grew too fast and broke over it's banks into the Great Lake System and the St. Lawrence River basin.  All of that fresh water screwed up the circulation in the North Atlantic.  Warm water from the tropics that kept temperatures moderate in North America and Europe was suddenly mixed with cold water from Lake Agassiz and it flummoxed our entire weather pattern.  For 1,300 years or so.  And yes...flummoxed is a very scientific word.

Why did Lake Agassiz, which was formed by melting Canadian glaciers, suddenly overflow it's banks?  Was it rapid global warming of the natural variety or was it caused by the explosion of a comet or meteor in the atmosphere somewhere above Central Canada?  These are questions that are being argued by minds much smarter than mine.  All I know is that it probably won't happen again.  Right?

You see, there is this massive ice shelf that covers Greenland.  Huge amounts of fresh water in glacial form that covers the entire island.  And it's melting.  At historic rates.  And it appears to be melting faster every year.  What if there is a sudden tipping point to the fresh water meltage rate that is currently pouring into the North Atlantic from Greenland?  What if the balance of the North Atlantic tropical circulation is about to break?  It would mean that the next Ice Age could be just around the corner.  It could mean that huge swaths of North America and Europe could be plunged into a deep winter that could last for a millennium.

Note: Remember to play the Bug-Eyed Trivia Challenge every day. Flummoxed is indeed a scientific term.
Pissed in the corner by Verdant Earl at 12:01 AM

The End of BLOGS!

Good morning to you!

As for here, we are expecting 9-12 inches of snow today.

but guess what? When we bought the house THEY GAVE US THEIR SNOWBLOWER. THE FIRST SNOWBLOWER I HAVE EVER HAD!!

Are those McDonald's Golden Arches disappearing under the deluge? I'd settle for that.

well, i *was* in a great mood.
wanna change your name from earl to buzz kill?

Have you seen The Core? Talk about ridiculous scientific premise....

(And if you have seen it, can you explain why they couldn't go down the way they came up -- seems like it would've been a lot easier.)

Holly - We haven't had any snow. Yet.

Zibbs - It's the feel good hit of the year!

Becky - How about Earl Downer?

Ren - I have seen it, but I couldn't tell you a thing about it besides how ridiculous Un-obtainium was. Yes...that was the metal that the ship was made out of. Un-obtainium.

Whoa, whoa, whoa here....if you are right and we are plunged into a new ice age and the sea levels all rise.....that means that my desert city will become a beach front town with its own ocean and we will be able to get rid of the 110 degree summers and live in balmy 78 degree weather year round while the wave lap at my own private beach......wooo whooo......lets light some more bonefires on Greenland and get this show on the road!!!

Seriously...the whole Day After Tomorrow concept was losely based on scientific discovery that massive global climate change is possible and could have happened in the past. History has shown that nature can often times take the very slow road, or the blink of an eye road, it is her call. Human society can be considered a cancer on the planet (although most blue nose religious groups see the earth as something that God gave us to USE) and mother nature has a way of balancing out her eco-system when we screw it up to much.....and its not nice to fool with Mother Nature.

I think I might rebuild an ark. Got any wood I can borrow?

Jimmy Bastard wants to know if i have any wood.....

Why does Earl want to make me cry?! Whyyy?!

i'm a bit chilly.
thanks for asking.

Bruce - I never mess with Mother Nature. On purpose.

Sybil - Somebody's got to do it.