There is no way for me to tell the following story without appearing insensitive. Or racist. Or both. But really, it's pretty racist. I'm just gonna have to own to it. I'm normally a pretty good guy, but this time I don't mind if anyone gets mad at me. I deserve it.

So you know that Gia and I watch a lot of baseball, right? Well, there is this guy who manages the Texas Rangers named Ron Washington. This guy: 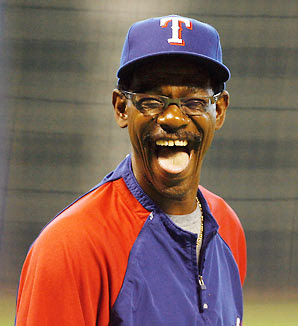 Well, ugh...I can't believe I'm admitting this, every single time we see him on TV in the dugout for the Rangers, one of us always says something to the effect of "He look like a crackhead.  Crackity-crack-crack-crack-crack crackhead!"  And we laugh.  A lot.  It's kind of become a game for us.  See who can spot him and say it first.

I know, awful.  There is no excuse.

And then the news come at me today that Ron Washington tested positive for cocaine use (MLB tests its team's managers?  Really?) last July.  He says that it was a one-time thing for him.  He only tried it once.

I know crack and cocaine are different. I know about society's views on each of these drugs. I know about unfair mandatory minimums and all that crap.

But damn if I didn't smile a bit when I heard about this today.

Isn't that awful of me?

I wanna see the receipts.

Doggie - What receipts? That one went over my head.

I don't think that's so racist. It's just funny.

bless your heart, sugar, but i'd think anyone with a grin like that was on something! xoxoxo

Doesn't matter what color he is, he looks wayyy too happy.

I think he was on American Idol singing about pants or some shit...?

MikeB - I thought it was pretty funny too.

Savannah - He does look artificially happy in that pic.

yeah . . . that's a fine line to walk. But sometimes people are walking stereotypes.

there. i said it.

Yeah...you should be ashamed....now go smoke some crack.