9 out of 10 flicks that I "find" on Netflix are crap.  That's okay, I sometimes dig a good crappy movie.  And I'm not talking about major studio releases.  I'm talking about finding something you never heard of while browsing through the genres that you love.  But every once in a while you find a gem.  Something that really surprises you in a good way.

The French horror flick Frontier(s) is one of those gems.  I've had it on my Instant queue for a few months now, but I finally got around to watching it last week. 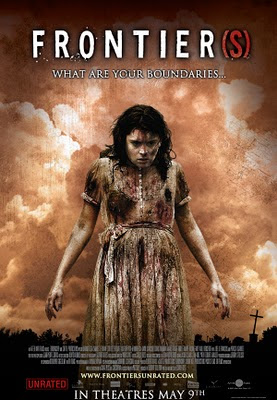 Let's not pussy-foot around here.  This is a brutal flick.  With a capital fucking Brute!  But if you can check your morality at the door for a couple of hours, it's also a highly entertaining one.  It's about a handful of small-time crooks on the run after an ultra-violent altercation with the Paris police.  They hold up in a little hostel (yeah...a hostel) in the French countryside that is run by a neo-Nazi family of utter degenerates.  Bad stuff ensues.

So it's a bit of Texas Chainsaw Massacre mixed with Hostel mixed with, oh...The Boys From Brazil.  Throw in some creepy things crawling around the abandoned mines under the area and you've got a party.


LET'S GET THIS MUTHA-FUCKA VIRAL, Y'ALL!!!
Watch this video and if you think it's funny, if you really think it's funny, then post it on your own blog. Either a link or the embedded video itself. Jut put it at the bottom of a post you are gonna do anyway. In a postscript or something. I've never tried to use my blogging powers for good before, so I'm interested to see if we can get this thing to take off. Even in a mild way.

Ooooh thanks! I love a good horror flick, especially when I am sad and blue. I have no idea why but that is my "go to" genre when I am depressed haha.

Hilly - Hey! You're back! I'll have to go check out your new digs. I hope you dig this flick whenever you get a chance to watch it. I thought it was amazing.

I'll give it a go pal, I do like a good horror fillum when they use evil bairns in a lead role.

That video was pretty amusing. Could have used a super fast freestyle riff in the middle or something, but it was still funny.

I just watched The Crazies this weekend - definitely worth checking out.

Frontier(s) is unlike anything I've seen. I am a grown-ass man and last night I had some fucked up dreams. If not for my pride, I'd even call them nightmares...but let's stick with fucked up "dreams." Nevermind the fact that in one early this morning I was on the altar singing Lady Gaga's 'Bad Romance' to a less than thrilled congregation in a dusty desert church. What the hell was that all about?

In getting back to the movie, there were at least three scenes that I can think of that made me cringe and shutter. As a fan of the Gore Horror, or "Gore-or" genre, I thought I was well suited for anything they could toss in my direction...nope. I really liked this movie, even if it turned my stomach ever so gently.

Jimmy - Well, there were some evil children in this one for sure. Just not in the lead roles.

Avitable - I'm a huge fan of the original and I'm not always against the idea of a remake, so I will definitely check it out.

WLC - I'm glad you liked it. I'd been scoring pretty low with you on my Netflix recommendations for a while there. And yeah...it was brutal.

dude, dammit! post a spoiler or something so when i wake up at 3inthedamndarkmorning and check out my reader (don't ask), i'll KNOW not to look at y'alls blog! i had the absolute worsefuckedupscaredmyassoffmademedamnnearscreaminmysleep dream! i'll pass on this one for sure! xoxoxox

Savannah - Sorry about that. I would think you would know better by now. ;)

The movie sounds too nasty for me.. I'm a lightweight.
But I enjoyed the male ice skater video..

Kate - I'm a heavyweight and it was almost too nasty for me. Almost. ;)