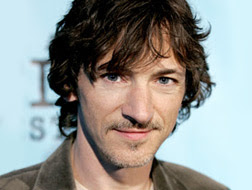 This past weekend, Gia and I watched Winter's Bone.  And I would have to say that it was by far the best movie that I have seen in a long while, and probably the best movie I've seen in 2010.  Award season is coming up and it has already been nominated for a ton of awards, winning a few already.  Among them would be Best Supporting Actor for the feller up there, John Hawkes.

I'm sure you've seen him in films before.  He's been a character actor for a long time now.  From the liquor store clerk in From Dusk Till Dawn, to the funny Bugsy in The Perfect Storm, to his brief work on Lost as the bespectacled Lennon in the final season.  He's been around.  One of those "that guy" actors.  You've seen him, but you never really knew who he was.  I think that's all gonna change come Oscar time.  If he doesn't win, which would be a shame, he should at least get nominated.

Having seen him play degenerates and funny men over the year, I never thought I'd ever see him play dangerous.  Which is exactly what he is in Winter's Bone.  And yet that danger turns to compassion at one point...he's a very complex character.  Or maybe the character himself isn't complex, it's just Hawkes' portrayal that makes it so.  He is an absolute treasure in this film, and everyone needs to know about it.

The film is about a young woman living in the Ozarks of southern Missouri.  Taking care of her two younger siblings and her damaged mother while her father is on the run from the law stemming from a charge of cooking meth.  Eking out a bare existence, she depends on welfare and the kindness of her neighbors just to feed her family.  Circumstances arise where she needs to find her father or suffer the consequences of losing what little her family has left.  This bare and harsh film turns into a mystery at that point, as she struggles within her own particular extended familial society to find her father.

I don't really mean to single out Hawkes as the only breakthrough performance in the film. The young woman who largely carries the film is named Jennifer Lawrence, and she is amazing as well.  Her character is one of those rare celluloid heroes that come along every once in a while.  Someone who you will remember for a long time.  She deserves every accolade that she has or will receive for her acting in this film.

As does the rest of the cast, including Garret Dillahunt, Shelley Waggener, Lauren Sweetser, Dale Dickey (she was the daytime whore on My Name is Earl!!!), Sheryl Lee and a whole bunch of largely unknown or first-time actors.  There is the small but important role played by a guy named William White.  I watched the extras on the Blu-Ray and I found out that this was his first movie, and he seemed genuinely touched that it was a life-changing experience for him. You have a feeling that a lot of actors in the smaller roles are just folks who are living on the edges of the life that this film portrays.

I loved this movie.  And John Hawkes was simply amazing in it every time he appeared on screen.  Check him and it out.
Pissed in the corner by Verdant Earl at 12:01 AM

I first got impressed by his work on Deadwood.

Hank - I still haven't seen Deadwood. It's on my list though. One of these days...

Literally the best thing I have ever seen on tv.

Heff - Wouldn't be you if you didn't go there. Merry, Merry to you and Donna as well!

Well, hell - I was gonna ask if he was the guy on Deadwood.
I can't believe you haven't seen Deadwood - it's awesome!
Uh, but this movie sounds good, too!
Have a fantastic Christmas if I don't get back here before then!
xoxo

he was awesome in Deadwood....

but fucking EVERYONE was awesome in deadwood...

Slyde - Yes, thank you. We have already established that he was in Deadwood. Merry Christmas.

Doggie - Dead Wood? What's going on in your pants, man?