I had this post planned for about a week now, but Dave2 pushed it to the top of my blog-pile with a mention of it yesterday on his site.  Justified on FX has, rather suddenly, become my absolute favorite show on television.  It's about a quick-draw throwback of a US Marshall named Raylan Givens who was re-assigned back to his hometown/county in Kentucky after an on-the-job shooting gone right in Miami.  Huh?  Yeah.  Lots of wackiness ensues as he has to deal with his ex-wife, father, childhood friends/criminal kingpins, etc..

The main character is played by Timothy Olyphant, and, to borrow a phrase from the kids at Warming Glow, if you're a dude and you don't have a little crush on Timothy Olyphant as Raylan Givens then you're totally gay. 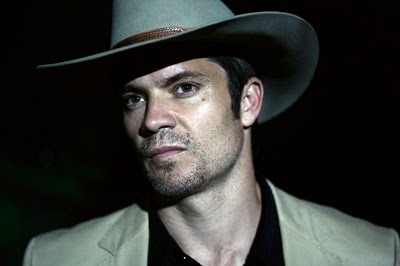 The second season so far is even better than the first.  I really how the writers of the show introduced this season's set of antagonists (an awesome backwoods pot-dealing clan led by the surprisingly frightening Margo Martindale), yet still managed to make it seem like a logical continuation of the first season.

You really should be watching it.

__________________________________________________
As an addendum to my raving about Justified, here are my current Top 5 must-see television shows.
Raising Hope and Modern Family might be the only two shoes that have ever made me laugh out loud with frightening consistency. We are constantly pausing and rewinding the DVR to re-watch especially funny parts of each show.  Fringe is just fucking awesome, and anyone who fancies themselves a cool nerd needs to be watching it.

I have a harder time explaining why I love The Cape.  I didn't love it initially.  In fact, I was real close to dropping it after two episodes.  But the third episode won me over, and it keeps getting better and better and weirder and weirder as the weeks go by.  I'm trying not to get too attached to it because it is bringing in terrible ratings so it's likely to get canceled.  But I'm going to enjoy the ride while it lasts.  If you don't mind spoilers, you should head over to io9 and see what the geeks are saying about it.  They love it just as much as I do.
Pissed in the corner by Verdant Earl at 12:01 AM

Ditch The Cape and add Castle and you're really close to my list.

Justified is simply too good for television. Usually something with this much awesome is cancelled after three episodes.

Dave2 - I've tried Castle and I have a bit of man-crush on Nathan Fillion, but it hasn't won me over.

i haven't seen any of those, sugar! thanks for the tip, i'll have to try and catch a peek. but i do love castle! xoxoxxo

p.s. he's back (and i've forgotten how to do a link) http://glasgowjimmy.blogspot.com

Our list is disturbingly similar, though I must admit that I gave up on The Cape after the 4th episode. It just didn't grab me.
have you ever watched Parks & Recreation? That one makes me cry every time I watch it.I think I have it just ahead of Modern Family & Raising Hope.
And I guess now I can cross my planned post on "Justified" off my list, you have pretty much nailed it.

i had really high hopes for Justified when it debuted, but it dissapointed me. Slowly over the first season, however, it began to win me over.

I've only seen the first ep of S2 so far, but its been good.

Although i cant help but keep thinking of Raylan as a watered down version of his characrter on Deadwood.

Savannah - Thanks! I saw that he was back yesterday. It's been too long.

Paticus - I actually gave up on Parks and Rec last season, but I started watching it again this season and I'm like it a lot more. God rid of that one boring character and added Rob Lowe and Adam Scott. Win win.

I wonder if season 1 of Justified is on Hulu. I need to check it out.

I gave up on The Cape after the second episode. It's so poorly written that I can't even stand it. Even from the first ten minutes, it was so bad, but I hoped it would get better.

Adam - I was right there with you after the second episode. But I hung in and the 4th episode was fantastic. And every episode since. It's bad TV, but it's good/bad TV...ya know. It started off worse than Heroes (yikes!) and now it's much, much, much better. The current 2-parter is great television with a really interesting villain...The Lich!

My favorite TV shows of late are:

I LOOOVE Timothy Olyphant.
That is all.

Oh wait! That's not all -what about the Oscars thing? Shit- when are the Oscars?

Sybil - next Sunday night, and I will do a live-blog. I'll post about it next week.

I feel like I've just uncovered a lost bottle of 20 year old single malt. Ahhh... it's good to be back in here again.

Jimmy - welcome back, you old so-and-so! :) The jernt wasn't the same without ya.

bad news...I work with a sibling of one of the prime actors on The Cape. Though they've filmed an entire season, the network did not add more. They are shopping it around.

Annabelle - Heya! And that was my fear. Too bad. Mabye SciFi (or, ugh, SyFy) will pick it up.

I <3 Timothy Olyphant. I will check it out.

Did you see I Am Number Four? He was the second best character in the movie. Bernie Kosar was the first.

Poppy - I had to look that up because Bernie Kosar is a former QB in the NFL. But he was the dog, eh? No...haven't seen it yet.

Love Timothy Olyphant... know what I'm thinking about being obsessed with? Southland. What do you think? Your opinion is moderately essential to my choices regarding television consumption.

Faiqa - I've only seen an episode or two, but I do like Michael Cudlitz. Or I like saying his name out loud. :) I do have a recommendation for you, if you are looking to get obsessed with a new TV show. Torchwood. The first three seasons are available on Netflix Instant and the fourth season is actually filming now as a joing US/UK production. It didn't hook me right away. Took maybe 4-5 episodes, but man...they go places where other sci-fi/genre shows have never gone. By the end of the first season it was one of my favorite shows ever! Really, really good. And you don't need to be a Dr. Who fan to watch it. It's a spin-off of Dr. Who (Torchwood is an anagram of Doctor Who), but without the cheese factor and much (much) more adult content. Check it out!