I was gonna save this for a Monday post, because I kinda gave myself a schedule for this blog a few months ago that included movie reviews on Mondays once a month.  But fuck that! 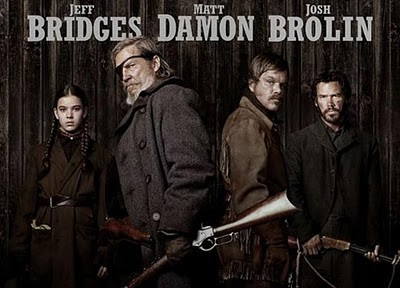 We went to see True Grit yesterday around dinner time.  Gia recently (like two days ago) lost her job, and I thought that would open up opportunities for us to go to the movies every once in a while.  See?  I always look on the bright side of things.  A movie...a little dinner...I'm there for her.

Turns out, I needn't have worried.  True Grit is absolutely amazing!  I couldn't have been more happy with the new film, and it didn't detract at all from my love of the original one.  Sure, Jeff Bridges isn't John Wayne.  But John Wayne wasn't Jeff Bridges!  And the rest of the cast of the new film were far better actors than the ones who played those roles in the original.  Well, most of them.  Barry Pepper as Ned Pepper (hey!) was really good, but I can't say he was better than Robert Duvall.  In fact, there was one moment where he sounded almost EXACTLY like Robert Duvall as Ned Pepper.  I don't know if he did that on purpose, or if it was just something that I projected onto his performance.  Probably the latter.  But overall...great performances in the new film.  Really amazing.

And the cinematography and the score of the film were both amazing.  I rarely notice that while watching a film because I'm a character and dialogue guy, but I really noticed both at quite a few times yesterday while watching it.

And if you have 48 minutes to kill, listen to this interview with the Coen Brothers on NPR.  Cool stuff!
Pissed in the corner by Verdant Earl at 12:01 AM

"Elvis was a hero to most,
But he never meant shit to me
As he's straight up racist
The sucka was simple and plain
Mothafuck him and John Wayne"

I'll take the bath-robed dude in jelly shoes any day!

I am so out of touch - I didn't even know they remade this movie!
Sounds good, though!

I am pretty jazzed to go see it(actually rather bummed that I haven't yet). I saw the original over Christmas, and I liked it, but didn't love it. I have never been a huge John Wayne fan anyway. I'm glad they were able to make a great movie without disrespecting the original, though.

sorry about gia losing her job..

but on the bright side, at least you didnt watch the new Halloween 2 like i did last night.

Doggie - Me too, but he was amazing in this as well.

PAticus - I do like John Wayne and his films, generally. And Rooster Cogburn is def one of his iconic roles.

Slyde - Ugh...I saw that already. How did you like the first 1/2 hour? Fucking awful!

i had a very similar reaction to the true grit remake. everyone said it was great, but i dreaded what it would do to my memories of the original. i fucking loved it! glad you did, too. did the lovely gia appreciate it also?

Becky - Gia loved it too! And she really needed to get out of that job situation, so it was for the best.

Well we rushed out to see it mainly b/c "I'm fucking Matt Damon" and I was extremely excited that he was going to be a cowboy again - I've been waiting since All The Pretty Horses! And the movies was good, my husband even liked it! However, I was disappointed that Matt Damon's character bites his tongue halfway through the movie and had to talk like his marionette character in Team America.

Suzi Q - yeah, but his sideburns clearly made up for it all, right? ;)

Best of luck to the job situation. If it's any consolation I haven't been paid since Christmas and had a job interview yesterday that looked promising. There are at least more jobs out there than there used to be. Best of luck there to you both.

The thing that bothered me about the original True Grit was that John Wayne got a mercy Oscar for it. And in the meantime the Academy should be embarrassed they missed his true Oscar-worthy performance (and the only one)- Ethan Edwards in The Searchers.

It was his best thing ever.

RW - I think we'll be fine. She already has a couple of companies interested in her. Sorry to hear about your job issues, and good luck with landing something that you can stomach.

I agree about Ethan Edwards being John Wayne's best role. Well, his best serious role. I love everything about his portrayal of Sean Thornton in The Quiet Man. But I was just telling Gia the other day about how awesome The Searchers is. She has never seen it. It was Ford's high point as a director too. So many shots were "copied" by later famous directors like Lucas and Eastwood.

Didja know that the Duke named his son Ethan after that role? Truth.

you mean the first half hour where micheal meyers was already chasing her thru the hospital, and i thought to myself.... how the holy fuck are they going to continue what should be the ENDING of the movie, for the next 2 hours, only to show that it was just a 30 minute dream?

There's a lot of legends around that movie... but the car accidentally in the scene after Wayne shoots the buffalo is really there. :-)

Slyde - Bullshit, right? You should read Final Girl's review of it. She blasts it!

RW - It's been a while since I've seen it, but I don't remember that. Cool. Wasn't this the movie that Buddy Holly got the phrase "That'll be the day" for his song? Edwards says it a bunch of times in the film.

I am going to have to put this in my que. It has to be better than the last movie I scarfed off the internet (Burlesque with Cher and Christina...gawd awful, but my wife wanted to see it).

Bruce - You would have to pay me to see that film. A lot!

I saw parts of the original after I saw the remake, and I prefer the remake. I think Bridges did a better job than Wayne.

Adam - Yeah, it's a tough gig because the Duke is iconic. I think both did a fantastic job with the role. Overall, I prefer the remake as well. But I love me some John Wayne.