Not that it's been a rocky week, although it has been.  No, I mean Rocky week.  As in AMC is playing the first five Rocky films this week...one each night.  I don't know why they didn't just skip the fifth one, which was beyond awful.  They should have, and they should have played Rocky Balboa instead.  THAT was actually a really good film and a nice companion piece to the original film.

We all know the first film was the best of the bunch and a true classic of American cinema.  It's iconic and groundbreaking and a bunch of other things.  It WAS 1976 for so many people, including me.  Just a really wonderful film, and a product of its era.

But there are bits and pieces of the next three films that I enjoy almost as much.  Mickey telling Rocky to not let Apollo's threats bother him.  Rocky responding with "Wouldn't it bother you?"  Apollo's manager warning him against fighting Rocky because "He's all wrong for us, baby. I saw you beat that man like I never saw no man get beat before, and the man kept coming after you."  Stuff like that.  Rocky III and Rocky IV have similar moments...although less and less of them as the series progressed.

I dunno, but I really like Rocky II.  A lot more than I probably should. 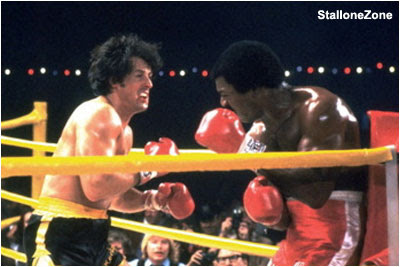 "Everybody in the audience better get ready for World War III"
Pissed in the corner by Verdant Earl at 12:01 AM

During this fight, I've seen a lot of changing, in the way you feel about me, and in the way I feel about you. In here, there were two guys killing each other, but I guess that's better than twenty million. I guess what I'm trying to say, is that if I can change, and you can change, everybody can change!

Doggie - Thursday night. Rocky IV. AMC. It's the commercials that make it fun! Now excuse me while I pour out some Colt 45 for my dead homes, Apollo. ::sniff::

That line from Apollo's manager is one of my all time favorite movie lines ever.

I and II are definitely the best of the bunch. I'll check them out fo sho.
So I take it you're feeling better?

did anyone ever tell you that you look like a young slyvester stallone?

Slyde - Burt Young is a handsome man. Thanks!

I find it disturbing that the image in this blog references the 'StalloneZone'? As in Stallone has his own 'Zone'.

Bruce - I chuckled at that too. And normally when I steal an image from someone else's site, I try to credit the source. But it's right there on the image!

oh how i love my rocky. mmmmmmmmmm!

Becky - Rocky is all kinds of all right.

Eye of the Tiger!

Ren - the #1 bad thing to happen to the Rocky series was Survivor. Well, maybe Mickey dying. But they happened in the same film! Coincidence, I think not.

Just so you know: I've been watching Rocky's all evening.

Sybil - that was my nefarious plan all along. Mwuah-ha-ha-ha!!!