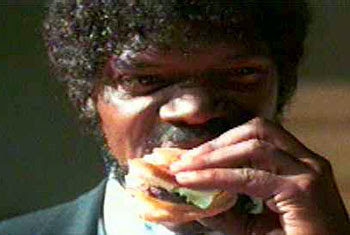 Happy half Birthday, Bennington! Bye bye, balls.
There are plenty of boobs in baseball! Weren't you guys discussing some last night?
The sandwich sounds yummy. But I'm a bottomless pit, lately.

I am pretty sure if my husband sees, more to the point *hears* that Arby's commercial one more time, his foot is going through the TV.

Sybil - There are plenty of boobs in baseball...true.

Five Guys Burgers are good, but they are no match for the Big Kahuna Burger.

I once paid a hooker 50 bucks for a Duck Club Sammy.

It was great but there was a lot of clean up afterwards...

Paticus - "Big Kahuna Burger. That's that Hawaiian burger joint. I hear they got some tasty burgers. I ain't never had one myself."

Slyde - No, never. I didn't know there was one as close as the Walt Whitman Mall.

Something Wild was filmed where I live. I remember, it was a big deal at the time. Watching it is pretty funny, because I recognize everything. Tallahassee is no New York state.

Hank - You know, I was gonna look that up because there was a certain "Southern vibe" going on in some scenes that didn't fit NY. There is a scene when they are driving on the Long Island Expressway and they get off at Exit 62 - Stony Brook/Blue Point Rd. It always looked odd to me. Because I grew up in Blue Point and that exit and road is called Nicholls Road. I paused the film and looked at the exit sign going the other way and it wasn't an exit on any Long Island road that I've ever seen. West Something Something Highway. Ha!

I can't usually get 'em myself because my girlfriend's a vegetarian which pretty much makes me a vegetarian. But I do love the taste of a good burger. Mm-mm-mm. You know what they call a Quarter Pounder with cheese in France?

Faiqa - Check out the big brain on Brett!

Yep, most of that is Tallahassee and the surrounding county. You can even see FSU logos and so on.

We have Sonic here, but there's several locations that we've seen closed down. Maybe it's popularity has waned.

Five Guys.. it's a tasty burger, that's for sure. Nice to have Jules remind us all of that.

Sonics is good, especially their drinks but nothing can compete with five guys. At least you got the better of the two :)

Fortunately for me I have both :P

I'm with you on the boobs thing.

Marty - I've tried Sonic in SC, and while I don't love it I do love that they serve you wearing roller skates.

Raine - Well, the closest one to me is about 25 minutes away. I want them to build one next door to me. :)

I remember reading somewhere that Slyde likes Five Guys. Up his ass!

Seriously though, what's wrong with Miami Heat? Are they not very nice? Are they basketball's Manchester United?

badger - They are not very nice. And they have only won once, so they are not Manchester United or the NY Yankees. But nice Five Guys joke!