I did this a while ago. And since I would have to turn this into a movie review blog (you mean it isn't) if I were to write a post for every new movie I've seen, well...I'm recycling the idea. You gotta problem with that? These films are all fairly different.  What can I say?  I'm eclectic.


______________________________________________________
Unthinkable (2010) - This was tough film to watch.  A terrorist plot against several U.S. cities has come to light, and in the course of rounding up suspects a former government-sponsored interrogator is accidentally picked up.  When the real suspect is also brought in, the FBI decides to use the interrogator and his highly controversial methods to find out the locations of the attacks.  This one isn't for the faint of heart.  Lots of grisly torture scenes.  Besides that, it almost felt like a stage play with most of the action taking place in one room.  Great acting with the likes of Samuel L. Jackson, Michael Sheen (not the crazy one) and Carrie-Anne Moss.  It just didn't overcome the brutality of the subject matter.   And since I had my own opinions about the effectiveness of torture during interrogations, it didn't do enough to change my mind. 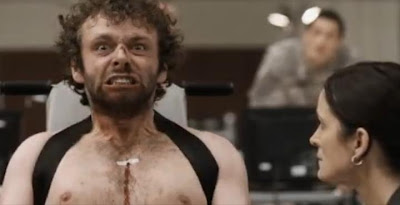 My Netflix Rating: 3 out of 5 stars

Monsters (2010) - I really liked this film.  If felt like some weird mix of Cloverfield and Apocalypse Now, in some ways.   In the near future, NASA has discovered alien life forms living in our solar system.  A probe, with samples, crash lands in Northern Mexico.  Half of the country is quarantined as the Infected Zone is now overrun with the alien creatures.  A photojournalist is hired to rescue the daughter of a rich American businessman after an attack near the Infected Zone.  After missing the last ferry back to the States, they embark on a journey through the Infected Zone with hired guides via river boat.  It's an extremely low-budget film that comes across a a film with a much higher budget.  A crew of 2 people, some $8,400 cameras and a digital effects program.  That's it.  Everything was shot on location, most of it without any permission.  And the extras were just folks that happened to be around when they were filming.  A really nice job by the writer/director, Gareth Edwards. 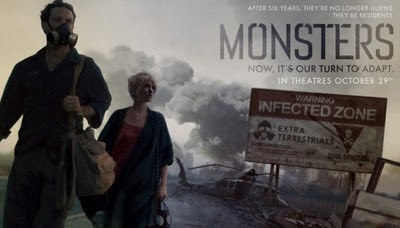 My Netflix Rating: 5 out of 5 stars

Atanarjuat, the Fast Runner (2002) - This one was a recommendation from our friend, RW.  A good one too.  Telling the pre-history story of two Inuit brothers named Amiqjuac (the Strong One) and Atanarjuat (the Fast Runner).  They and the rest of their tribe must deal with a haunting evil that has come to their people in the form of a mocking shaman.  Atanarjuat falls in love with a woman who is promised in marriage to his rival, and that sets tragic events in motion.  This is the very first movie filmed entirely using the Inuktituk language.  It was also filmed in glossy video, which was initially distracting but felt right after a while.  The movie featured two things I love.  Old myths from different cultures, and an Arctic setting.  I'm fascinated by the Arctic.  Not an easy viewing as it was a bit confusing from the get-go, and it ran a bit long.  But definitely worth it. 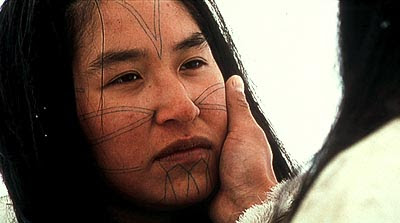 Faster (2010) - I love me some Dwayne (The Rock) Johnson.  I really do.   And even I went into this film knowing that it was gonna be pure brain candy and mindless violence.  But it slowly won me over with the performances and, believe it or not, nuance.  Johnson is a man known as Driver who gets out of prison after a 10-year stretch for bank robbery.  He has spent his time in prison preparing to take revenge on a crew of criminals who killed his brother and left him for dead.  One by one, he tracks the crew down and exacts his revenge.  But he isn't just a mindless instrument of vengeance.  The killings begin to take their toll on him.  Interestingly, an assassin was hired to track him down and dispose of him.  And the assassin is dealing with his own career choice issues.  Looking to move on.  Throw in a drugged-out cop on his way to retirement (played by Billy Bob Thornton), and you've got a movie.  There was nothing surprising about the film.  I actually was hating it for the first 20 minutes or so.  But it slowly won me over with the performances.  Yes, including The Rock.  He was really, really good in this one. im pretty sure i told you about Monsters when i saw it about 2 months ago. i had heard he wants to make 3 films. i enjoyed it.

and i didnt realize faster was out yet. netflix instant?

Sweet!
There is something likable about The Rock, isn't there? Like, you want to not like him, but he's not as awful as you expected. Funny.

Slyde - I rented Faster on Amazon.

Sybil - Did you see the sequel to Get Shorty? It was beyond awful, but it's worth watching for The Rock alone. He was awesome in it.

I wish Dwayne Johnson would do real comedy - he was great on SNL.

Faster was fun and violent. Not much else you could expect from that movie, but everyone was good in it.

Adam - I repeat, watch his scenes in Be Cool. He was hilarious in that.

my boyfriend dwayne was the only reason i saw faster. and he was worth every penny.
le rowl.

Woohoo...I'm jazzed to see Dwayne's favorable review. He gets me happy in all the right places. Funny as Hell and looks good in those little black panties he wears in the ring.

Annabelle - I feel the same way. Wait, what?

I thought Unthinkable was just plain stupid. It was gross, sure, but the plot was horrible and poor Samuel was just put in there to do his yelling angry voice. Carrie-Anne was boring at best.

And this is why we all have our own opinions.

We will be seeing Faster, fo sho.

Poppy - I pretty much felt the same way, but not enough to give it two stars. It was one of those tweener votes for me. I thought Michael Sheen did a fine job.

I am almost done with the remodeling of my media room and hope to get back to the Essential Cinema series sometime this year....it is one of my goals. These all sound interesting, but I sort of gave up on Dwyane when he signed with Disney for a few years......I mean really...."Race to Witch Mountain"? Dwayne, what were you thinking?