And his hair was perfect!

"Even a man who is pure in heart and says his prayers by night, may become a wolf when the wolfsbane blooms and the Autumn moon is bright." - The Wolf Man (1941)

Continuing our October Horror theme (that began with zombies), it's time to turn our evil mind's eye towards a particularly unique cinematic monster. A bogeyman born of celluloid and bred in Hollywood. 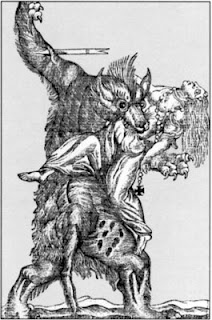 Sure, there had been plenty of examples of werewolves, lycanthropes, loup-garous and shape shifters killing with vicious abandon in literature as far back as the Middle Ages and before. But the mythos surrounding the werewolf, more than any other iconic monster that haunts our dreams, has largely been created on the silver screen. Wolfsbane, silver bullets, the full moon, the spread of the contagion by wolf-bite...these have all been perpetuated by the cinema.

But what is it that really makes a good werewolf film, you might ask. I would say that my favorite werewolf films all have the same thing in common. They were scary as hell! Man versus our own inner demons that are usually held in check by our better angels. Demons with sharp claws and teeth. Demons that hide amongst us during the daylight hours, just waiting to prey on us as the full moon rises.

I watched the third film of the Ginger Snaps trilogy over the weekend, which is what led me to post about the subject today. I love these films! While not as aesthetically scary (due to sub-par special effects or a decent monster) as some of their contemporary cousins, I like how they work as character studies and as a metaphor for adolescence. In some ways these films are among the darkest of their genre due to the strained relationship of the two sisters and their fight to cling to their humanity.

Got me to thinking about other werewolf movies and which ones where my favorites. I was saddened to find that there are really not that many great werewolf films out there. The Golden Age of werewolf films was probably the late 30's (Werewolf of London) to The Wolf Man in 1941 and it's various sequels during the next 10 years. Those films, while original, haven't really stood the test of time. The Silver Age began in 1981 with the release of An American Werewolf in London and The Howling. Two superb horror films. The Modern Age was kicked off in 2000 with Ginger Snaps and two years later with Dog Soldiers.

Sadly, there hasn't been a lot to offer in the genre between these high points. A great werewolf film is out there, just waiting to be made. Especially with the advances of special effects and movie magic. CGI, however, should play a more limited role. The werewolves we have seen in Underworld and it's ilk have just been lame, in my opinion. They need to get back to scary makeup and scary storytelling for the next great werewolf film. Let's hope someone out there is intent on making it.

Were-Earl's Top Five Werewolf Films*
5. Bad Moon (1996) - A thoroughly underrated horror film, in my opinion. Focused a bit too much on the dog as the protagonist for my liking , but it has several truly frightening scenes including the opening attack and the showdown in the boy's room toward the finale. The on-screen transformation kinda sucks, but we see more of the actual werewolf in this film than just about any other that I can think of off-hand, and surprisingly it doesn't lessen the impact. And the end result is a scary offering.

4. The Howling (1981) - Unlike An American Werewolf in London, I don't think this one has stood the test of time nearly as well. It's still scary, bloody and extremely well-done. But the camp value, possibly heightened by a slew of inferior sequels, is just a bit too high. Still, the hopelessness and the feeling of being trapped by monsters in a remote setting makes this one a can't miss entry. Even with Dee Wallace's transformation into the "cuddly" werewolf at the end of the film. What the hell was that all about?

3. The Ginger Snaps trilogy (2000-2004) - I could just include the original film here, but all three have their moments that make the trilogy worth recommending as a whole. The second and third films were filmed successively with the third being a prequel, taking place over 200 years before the events of the first two films. The last one didn't really bring anything new to the genre, but our heroes are trapped in the woods at a military fort while being stalked by an entire pack of werewolves. The isolation and the hopelessness of the situation alone is enough to make this a worthy entry.

2. Dog Solders (2002) - I mentioned this one earlier. Neil Marshall accomplished exactly what any true fan of werewolf films dreamed of in this outstanding horror movie. Sure there were some plot elements that were a bit hokey, but the acing, pacing, direction and the isolated situation blended together perfectly to make one hell of a scary werewolf film. If you haven't seen it, do yourself a favor and do so immediately.

1. An American Werewolf in London (1981) - 27 years later and still the best! John Landis gave us what is to this day the best and scariest transformation scene ever filmed. Thanks to the incomparable talents of Rick Baker. While it had it's fair share of humor, it was still extremely frightening, bloody and iconic. And the contrast in setting from the moors early on in the film to London for the second and third acts was wonderful. Absolutely brilliant in just about every way.

What do you think? Did I miss any?

*Since the Golden Age werewolf films are now only marginally frightening, I have omitted them from the discussion. - Earl
Pissed in the corner by Verdant Earl at 12:01 AM

It never occurred to me til now that I hadn't really seen that many werewolf films - I haven't seen any of these you mention. Gonna have to check em out. My partner just piped in with Teen Wolf and Teen Wolf II with jason Bateman which he thought was pretty scary... I know Wolf with Jack Nicholson wasn't that gory or scary in your regular horror flick way but I thought it put an interesting spin on the whole werewolf theme.

Dog Soldiers was great, too.

Now, on my list, I would have had Teen Wolf on there. I love that movie.

Teen Wolf is my favorite, too.

That said, in the VAMPIRES KICK WEREWOLF ASS any day, any time, any place. Sorry, I'm something of Vampire Nation nationalist.

"in the world of horror" I meant. That comment was before my second cup of coffee.

sir, you have stunned me.

I have nothing to add. Our lists are pretty much exactly the same. After reading the beginning of your post i had thought that i might write about my top 5, but i can see now that there is no need.

the only thing i would change is Ginger Snaps... i just are not as big of a fan of them. I disliked the 2nd, and thought the 3rd was respectible, but i would put them last on the list.

and i must also note that i have all of these movies on your list on dvd.. so there!

I have aesthetic problems with horror films that are not done in a black and white, quasi-film noir view.

the old silent Nosferatu is still the quintessential horror flick in my world, though Ok no, no werewolves. but... you know...

AK - Not only do I not consider Teen Wolf to be a good werewolf film, but I also don't think its very funny...which is what it was supposed to be. Hate the Teen Wolf!

Avitable - I liked all three, with the 3rd being my least favorite. And what's with all the Teen Wolf love?

Faiqa - ANOTHER TEEN WOLF FAN! WHAT THE HELL? And yes, there are many more good vampire films than werewolf films. But they aren't very scary. Most of them.

Slyde - I've always like Ginger Snaps more than you, but I have to give you credit for recommending it to me in the first place. Well done, sir!

RW - Murnau was a genius and Nosferatu works effectivly as horror even today. So does Dracula, even if it is slightly more campy. My favorites from yonder are the James Whale offerings. Frankenstein, Bride of Frankestein, The Invisible Man. Big James Whale fan. Not in a gay way, of course. :)

I have a heterosexual crush on Michael J. Fox.

I thought Teen Wolf was scary. Did you see that fat guy in the movie? frightening. As for American Werewolf In London, that was a great one. And I'm sure you're aware that the lead character was the Dr Pepper kid.

Avitable - Admitting it is the first step towards healing.

American Werewolf In London is my absolute favorite! Followed by The Howling...

I have tried leaving comments several times and keep having issues getting them to post... grr.
I just wanted you to know that you are one of my daily reads..so,even if you don't hear from me.. I'm still here... :)

Your fascination with all things 'gore'...is truely disturbing....

(must be all those Utz Barbacue chips you have been eating)

Girly - Heya, and thanks! I'm a daily reader of your blog too, but I sometimes get lazy about commenting. :)

I will have to agree with you on the American Werewolf in london (the best so far) and the howling. I haven't seen the others you mentioned. However, I can't entirely concur on the Underworld comment. As a horror movie, it doesn't quite fit the genre, but I think it's still a great action movie in it's own right, with a great portrayal of the wolfman. Besides, I'd totally let Kate Beckinsale suck my . . . . . blood.

What does no one appreciate the contributions of Gary Busey to the genre? Silver Bullet ruled.

Here's a couple of controversial offerings... What about the Hammer version of the Hound of the Baskervilles? It's not a werewolf movie in that it doesn't strictly have a werewolf, but it's played just like one.

And with that in mind, what about - and I know you love this movie - Brotherhood of the Wolf? Surely that can be counted? Okay, not a werewolf, but it is for all intents a werewolf movie, same ingredients, same flavour...

badger - I love both those movies, and I gave serious consideration to BotW. But in the end I couldn't really call them werewolf movies. Good call, though.