"When there is no more room in Hell, the Dead shall walk the Earth."

That was the tagline to George Romero's Dawn of the Dead, and an apt starting point to tackle an important psychological question that has haunted humanity for eons.

Where would you go and what would you do when the Zombies attack?

I watched the remake (ha!) of Day of the Dead over the weekend. You could read my review of it here, if you are bored enough or if you are into that kind of thing. I was telling Gia about how truly awful it was when she stated that she never understood why anyone wouldn't want to hang out forever in a shopping mall when the Zombie apocalypse finally arrived. I calmly explained that they didn't WANT to leave the mall in Dawn of the Dead, but circumstances begged to differ. Besides, I'm not so sure that a shopping mall would provide the kind of long-term security needed when facing an evil horde of Zombies.

That led to the above mentioned question. Where would I go and what would I do when the Zombies* attack? That's a tough one. So many possibilities and so many bad choices.

*Just to be clear. We are talking Zombies here. The Undead. Not regular people infected by a virus or anything. But the walking dead. They are slow and they are determined. Their hunger cannot be quenched. The only way to stop them is to destroy their brain somehow. A bullet or a machete seems to be the best way to accomplish that. From my research, anyway.

A prison would probably be a good idea. At first. Fortifications beyond anything in a large apartment building, casino or supermarket. But the lack of natural resources would be a huge downfall. Sure, they probably have enough canned and dry goods stored in the kitchen to last a while, but you would be eating prison food for the rest of your life. That's just fucking bleak!

The Zombie Survival Guide by Max Brooks suggests that one of those off-shore drilling platforms would make the most sense. You would be isolated from just about any kind of Zombie attack imaginable. While they can't swim, they can walk underwater since they don't need oxygen to survive. But even if they reached your platform, Zombies are notoriously bad at climbing. You would have plenty of food as fish populations would increase once humanity stopped over harvesting them. And plenty of energy from the oil rig. You would just need a little technical know how. Sounds a bit daunting, if you ask me.

I dunno. That kind of existence sounds almost as bleak as the prison scenario. Frankly, I'm not sure that there is any answer that is ideal. A deserted island, a houseboat, a military bunker, a desert outpost...these are all good ideas. And they all have their drawbacks. So I put the question to you, dear readers.

Where would you go and what would you do when the Zombies attack? 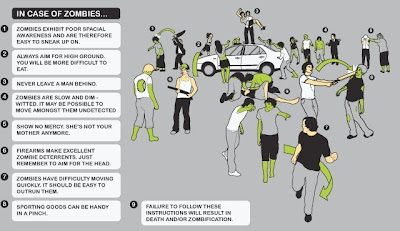 Clicky the picky to make it go biggah! - Earl

EDIT - Some great suggestions, especially the castle idea. That got me to thinking. The White House would be perfect! Great fortifications. Unlimited food stores. Comfortable living. Underground bunker complexes. This place has it all. Unfortunately it has allowed an evil, soulless Zombie through it's doors many, many times over the past 8 years. Gotta work on that. - Earl
Pissed in the corner by Verdant Earl at 12:01 AM

Labels: A silly waste of time

I enjoyed the Dawn remake, but heard nothing but bad things about the Day remake. The original Day is the worst out of the three, so that doesn't surprise me.

Your prison idea is a good one. You should read "Walking Dead", a comic by Robert Kirkman. The first 50 or so issues are out in trade paperback, and they're excellent. Try the first trade and see if you love it.

In World War Z, when the author finally remembers the world is larger than America and Asia and Europe appears, one of the contributors mentions Ludlow, the town what I live in, and comes up with a great idea - the people hide in the castle, an 11th century building with grounds big enough to grow plenty of food and walls no zombie could get over, ever. So I think that would be pretty high on my list.

I was going to suggest a castle - anything on a hill (good range of fire and visibility), with a ditch (makes attack more laborous), plenty of high steep walls, inner and outer (to allow for fall back positions if any of the outer defences are breached) and a well.

And places to grow food.

I've never heard of zombies using projectile weapons so if we could rebuild Corfe Castle that might do.

I can't think of anything better than your suggestions.

I was, however, inspired to think of the zombie in a more allegorical sense after reading this post.

Zombies reflect a strange type of death -- a place between being alive and dead. The only places that afford safety to non-zombies are places that are isolated and cut off from the world. An existence in those places proves bleak and other than "surviving," that existence proves pretty meaningless.

So, I guess if the world was taken over by flesh eating zombies, I would stay home with my family, have a good meal, tell everyone I love them and construct plans for a death that was of my own making (as opposed to being eaten to death--eww). I know, what a wimp.

I would hide inside Sarah Palins closet. There's so many skeletons already in there, the Zombies would get bored after a few weeks and move on to look elsewhere.

Failing that, I would encase myself inside the nearest McDonalds restaurant. Not even Zombies would want to be seen dead eating in a place like that.

Avitable - I liked the Dawn remake too. And my buddy Slyde has all the Walking Dead books just waiting for me to read. He was a HUGE fan of the original Deadworld series as well.

Badger - see, that's what I needed. A little European ingenuity. I would never have thought of a castle. And we even have a real castle-like place about 3 miles from my house that would be perfect. Very nice!

Faiqa - I think you just brought me down. :(

Bollix - Hate to admit it, but I just ate that crap on Sunday. Had a rough night out on Saturday and the greaseburgers do wonders for settling the stomach.

The In Case of Zombies is a Threadless T-shirt. I saw it on Ebay last night and almost bid on it. I shit you not.

Zibbs - You know, I saw the image on a bunch of sites, but I think the Threadless site is originally where it came from. I was there last night as well. Weird. Well, now we know at least who to credit. Thanks Threadless!

I like the isolated deserted island idea. Actually, I like that idea whether there are zombies or not. In fact, I think I'll do that regardless. Bye!

This is a puzzling question indeed.

I mean, once you chose a location it would seem you are stuck. And then you have to cultivate resources such as food.

But heck, why not Las Vegas?

It is crowded with um, tourist types so plenty of Zombie food.

Meanwhile you can take in a show, gamble, enjoy some sun. There should be plenty of weapons around certain areas (like high crime areas).

And then, you can blast zombies whilst dining at the buffet.

Yeah. Las Vegas is looking better and better as an option.

Mrs. Hall - Vegas is already packed with Zombies. Just go to Ceasar's Palace and take a gander at the slot machines.

I think you are looking at this all wrong. You don't want to run from them. They are a resource that needs to be contolled and harvested. There has to be some use of dismemberd zombies. Possibly pet food?, or a Solyent Green scenerio. With enough Tabasco the wouldn't taste toooo bad.

I would recommend a 'Stryker' attack vehcile from the army. You could just run them over. An Abrams tank would good as well, although a bit cramped.

Bruce - This has been used in several Zombie films, most notably with the "Land of the Dead" and their armored vehicle called Dead Reckoning. I like it. Keeps you mobile. Good thought.

b.e. i'm thinking a large apartment building on the top floor. Can zombies climb stairs? We can shut the elevators off and close off all the staircases so we would be safe up high??? Of course we would need provisions such as food and water. Lots of frozen stuff i guess! NYC tap water is ok to drink so we are good to go there. I think this may work unless zombies can climb on the outside of the building up to high floors!! Can they???

The original Dawn Of The Dead is one of my favorite movies of all time.

b.e. what if the stairs are closed like bolted down so the zombies cannot get inside the staircases at all. Like impossible!!! Water won't get shut off i don't think and as far as food, well eventually we will have to subsist on just water!! It can be done!! If zombies don't have a way of climbing up the stairs or walls i think we can survive!!!! :O)

Not only are prisons fortified but they also have generators for when the power goes down. But plan on eating turkey bologna for a long time.

Kiki - The grotto would be hard to defend. ;)

Michelle - but you are trapped up there as well. I don't like it. And water will get turned off in the event of a national disaster. That's why you are always told to fill the tub.

My brother and I have a whole plan of what we will do WHEN the zombies attack. And since you might be one of them I'm not at liberty to say. ;)

Poppy - I do enjoy the occasional sweetbread. ;)

EWWWWWW! I KNEW IT!