"It all goes back to something my grandmother told me when I was a kid. 'Holden,' she said 'the big bucks are in dick and fart jokes.' She was a churchgoer." - Chasing Amy
I don't see how you could have missed it, but a guess a few people may not know that Kevin Smith is releasing his newest film Zack and Miri Make a Porno later on this week. The ads are all over the fucking place. Even the censored ads that no longer suggest the titular duo are on the receiving end of some nice oral. That's right. I said "titular". 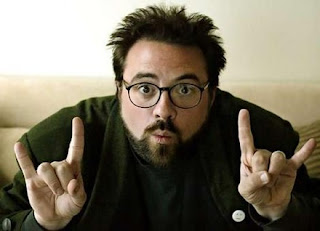 I've definitely got a love/hate relationship with Kevin Smith. I loved Clerks. I hated Clerks II. I loved Mallrats. I hated Jersey Girl. I both loved and hated Chasing Amy almost at the same time. That was hard to do. I loved Dogma and hated parts (loved parts) of Jay and Silent Bob Strike Back. I hate him and his fucking ego during the commentary tracks on his DVDs and I love him in his "Evening With..." series and whenever he is on a radio program like Opie and Anthony.

It's a complicated relationship. I think Kevin would agree.

Now he is wading in the cool waters of the Judd Apatow repertoire company with his latest flick starring Seth Rogan and Elizabeth Banks. Oh, he throws a Jason Mewes and a Jeff Anderson in there for good measure. Just to let you know that it is indeed a Kevin Smith flick. But let's not kid ourselves. He wants the Judd Apatow audience and money that Seth Rogan brings to the table. Nothing wrong with that. But isn't it a few years too late for that? I've got a Seth Rogan hangover and I need a fucking break.

I love that movie and think it's a perfect sequel to the first one. The scene in the jail at the end more than makes up for any shortfalls.

Avitable - "Hated" might be a strong word for what I felt. Disappointed, bored, I dunno...I certainly didn't love it. Very forgettable.

I was wondering that exact same thing about the amateurs. Although the version I saw was called something else...

An oxymoron of relationships if ever there was one.

Unfortunately my film-watching credentials wouldn't even register on your scale so I can't pass comment on any of those films. I have watched Jay & Bob but the fact that I cannot remember a single bit of the film speaks volumes to me.

I do like Edward Scissorhands, American Beauty and Fight Club. Does that make a film homo? :)

Jon - no way. Those are all very good movies! Well, American Beauty might make you a film homo. ;)

I agree with you in Smith. Some scenes are so great because of the dialogue. Others are ruined because dialogue goes on and on and you can tell it was written by Smith.

Dogma is probably one of my most, most, most favorite movies. I'm pretty much in accordance with your feelings on KSmith.

Zibbs - he has become very hit and miss. Whereas Clerks was brilliant all the way through.

Faiqa - I loved Dogma as well. Probably his best writing to date. I would have loved to have seen Janeane Garafalo in the lead instead of Fiorentino, but...

I have a secret crush on Seth Rogan so i see everything he is in!!!

Ooops i guess my crush is not so secret anymore is it???

Michelle - I'm telling everyone I know!

I don't know what that says about me.

Britt - Doesn't say much. It's only a movie. I loved whole stretches of the film and I'm a comic-book geek so that part of it appealed to me. But the idea of a lesbian being "turned" by a dude is just male masturbatory fantasy. Sure, there are men and women out there who are truly bi, but this just smacked of penis worship to me. And Holden's solution to his lack of experience toward the end was absolutely ridiculous. And smug. It ruined the movie for me.

im surprised you hated clerks 2. While certainly inferior to the first, i thought it was pretty good.

i expected to hate it, and was pleasantly surprised.

besides that, we are pretty much right on target with regards to mr smith.

but i dont hate him ever... i think he's the shit.

Slyde - Like I said to Adam, "hated" might be a strong word. I watched it, was mostly bored with it and I chuckled a few times. That was about 6 months ago. Now I don't remember it at all. BIG difference from Clerks in my book.

I am feeling really stupid and old looking at the list of movies in this post. Sigh...

RW - It's easily remedied with a trip to Blockbuster or NetFlix.

Earl, You are my best movie-man. Off topic, I've tagged you for a meme.

I didn't care for "Clerks II", either.

With the exception about Jersey Girl sucking monkey balls... oh the blasphemy!!!

Clerks was no nonsense brilliance. Mallrats was no holds barred looking at the trainwreck of the youth of today who become full on consumers tomorrow and hopefully have sex in very uncomfortable places. Chasing Amy was an EPIC REALITY CHECK for just those types of fantasies. Dogma was a practical look at the hypocrisy we (those of us raised in religous households) were spoon fed. Jay and Silent Bob Strike Back was unadulterated monkeying around. All of which left Clerks II to close the circle on the tale of the journey of friendships and their evolution.

I highly anticipate this movie... and have already looked for the earliest Saturday morning showing in Orlando for it.

That kid is BACK on the escalator.

Heff - should have been in B&W.

Dawg - Clerks, Mallrats and Dogma are three of my all-time favorites. And I liked Jay/Silent Bob and Chasing Amy enough to buy the DVDs. I just didn't like Clerks II.

WLC - Mallrats was genius. So was Jason Lee. Smith picked him out of a Sonic Youth music video for that role. Nice!

It has to be better than Jersey Girl. That pos should be ripped from the Kevin Smith library and all prints burned.

Evyl - No doubt. I still think it won't be that good though. We'll see.

I've been saving this on my Bloglines for a few days because I love Kevin Smith. The only one of his films I really hate is "Jay and Silent Bob Strike Back."

"Clerks," "Chasing Amy" and "Dogma" are probably my favorites (in order). I love all three.

"Clerks II" and "Mallrats" are very good but suffered from fans putting them on a pedestal. It's tough for me to get over having high expectiations, which is probably how I'll react to "Zac and Miri."

"Jersey Girl" is a whole other story. All the "Bennifer" hatred really ruined the buzz on that film. It was a lot better than expected.

Nice to see some people who like Mallrats. I love that movie.

Paticus - Heya, and wow...you have a lot of blogs!