I've decided that this is gonna be Monster Movie Week on the old Bug-Eyed Blog. Yesterday's post on werewolf films got me thinking about horror films, in general, and I have convinced myself that they fall into one of five categories, which I will write about this week. I'm skipping zombie films because 2 out of 5 of them would be called Dawn of the Dead and another would be Night of the Living Dead (too much Romero love), but I'll give Slyde this opportunity to do a post on that subject. 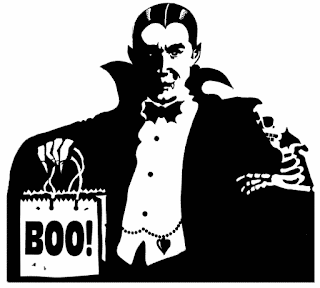 Earl's Top Five Vampire Films
This one was a bit harder to trim down to just five than my werewolf movie list. There just has been so many great vampire movies. I have omitted some of the more recent CGI-inspired films like Underworld, Blade, Van Helsing and even Night Watch/Day Watch (which were great, by the way). Why? Just because. I don't know...I never really felt like I was watching a "vampire" movie in those instances. And it's my list, so there!

5. From Dusk Till Dawn (1996) - This was a tough one to include. The depiction of the vampires absolutely sucked in this film! Robert Rodriguez has a penchant for going a bit too far with some things and he certainly did it here making the vampires look just plain ridiculous. But it had Clooney and Tarantino chewing up the scenery and it had Salma Hayek doing a booty dance with a big snake. The premise alone makes the choice a worthy one. I also liked how you couldn't even tell it was a vampire flick until almost halfway through the film. I really could have picked any of the films down below in the "Honorable Mention" category here, but this one was just so much damned fun! Not really scary, but lots of fun.

4. Dracula (1931) - This was another one that was tough for me to include due to it's overall camp value. It certainly hasn't stood the test of time as well as some other horror films from that time period. But it is so iconic, so important to the genre that it really had to be included. Bela Lugosi hams it up admirably and Tod Browning lights the Count in eerie, almost hypnotic ways. It's an absolute must-see for fans of vampire films.

3. Vampires (1998) - There is so much that is so wrong with this entry from John Carpenter. James Woods acts as if he is pissed his agent signed him up for this one all the way through it. Daniel Baldwin is just awful. And the budget was extremely low even by Carpenter's standards. But I loved sinking my teeth into (see what I did there?) this tale of truly evil vampires and the connection to the Catholic church. The vampires themselves were frightening and blood-thirsty, reversing a trend that Anne Rice had perpetuated with her novels. And I'm a blatant John Carpenter sycophant. The man can do almost no wrong in my book.

2. Martin (1977) - Is it sacrilegious to pick this film as my favorite all-time George Romero flick? Some would believe so. But I love this film! If you haven't heard of it, it is the story of a young man who believes he is actually 80+ years old and a vampire. He even drinks blood. He is sent to live with his uncle or cousin (I forget), who will try to save him. It's a great character study of a man who believes he is a vampire and acts out on those beliefs by drugging women and slicing their wrists to feast on their blood. The cuts between color and black and white work wonderfully to depict dichotomy of the real and fantasy worlds of Martin. It's not your traditional vampire flick, but it is a really good one.

1. Nosferatu, eine Symphonie des Grauns (1922) - The first (kinda) and still the best. F.W. Murnau and Max Schreck brought this version of Bram Stoker's "Dracula" tale to frightening light. The names were changed due to copyright reasons, but it is basically the same story as the version filmed by Browining 9 years later. Schreck was just so creepy in the titular role that it is hard to believe that he is only onscreen for about 10 minutes. Vampires on film went from Schreck's gruesome portrayal to Lugosi's more charming persona for quite a while. But nowadays filmmakers are returning to Murnau's original vision. About time I say. What is so scary about a vampire in a tuxedo anyway?

Did I miss a favorite of yours?
Pissed in the corner by Verdant Earl at 12:01 AM

Hmmmm. FDTD is fun, but Tarantino and that awkward, badly drawn out opening sequence – the first half of the movie, basically – is just crap. The second half, from the steps of the Titty Twister on, is the real movie. And of course it has the line, "I may be a bastard, but I'm not a fucking bastard."

I know what you mean about Vampires. Have you read the book? The movie is a relatively small part of the novel, if I remember right. This is a real guilty pleasure - but I would have swapped either Vampires or FDTD for Near Dark.

I think I might have had Salem's Lot on there instead of Dracula. Controversial I know, but that TV movie does so many things so well. And I mean the David Soul/Tobe Hooper one, not the more recent one. I know it strays from the book, but it also still scares the shit out of me.

And as for Nosferatu, what a movie that is. Genius, pure and simple.

Love at First Bite. Probably been nearly 30 years since I saw it, but when I think of the Dracula's I've loved I think of Gary Oldman - and George Hamilton.

Great idea for posts! I love horror films. I agree with Vampires. There are some major flaws but it's such a great story and there are some great parts in it. I wish they would remake it.

Is a vampire movie just a movie that has vampires in it?

I think I'd have:

Interview with a Vampire

Shadow of the Vampire (great movie if you haven't seen it)

Blade (the first one is one of my favorite comic book films, too)

with Queen of the Damned as an Honorable Mention.

I remember when I rented "From Dusk Till Dawn" on video. I had no idea what the movie was really about and it was great when it went from one movie to something totally different half way through. And of course, the Salma Hayek thing was an absolute classic.

Yeah, what did you think of Shadow of the Vampire?

badger - I really liked the first half of FDTD. And I watched Near Dark about a month ago and it wasn't nearly as good as I had remembered.

Zibbs - There was a terrible sequel made with Jon Bon Jovi. Um, yeah.

Avitable - Shadow of the Vampire is pretty great, but since I included the film it was based on I decided to leave it out. And you know how I feel about Buffy the TV series, but the Buffy film was a pale shadow of it.

Wil - There is a shot of Salma Hayek backing up on the table where her ass almost lands right in front of Clooney. The look on his face is priceless.

DG - I thought it was great, especially Dafoe. See above for why I didn't include it.

you only like FDTD because of the foot scene with Salma, you pervert.

I think you might have went slightly off the rails with this list, which is a shame because you were dead on yesterday.

i cannot include dracula or vampires on this list. Ive never seen martin, which is shameful on my part since im such a romero nut.

30 days of night, while a so-so vamp movie, was leagues better than vampires.

Can you tell that i HATED vampires?

p.s. i'd put any of your honorable mentions (except lifeforce) on the list.

Slyde - you should see Martin. Romero himself has called it his favorite film. I liked Vampires more for what it wasn't that what it was. Weird, I know. I'd be fine with replacing it or FDTD with any of the choices on my secondary list, really. But Dracula, Nosferatu and Martin are must-haves.

I am suprised that you didn't pick Coppela's "Bram Stroker's Dracula", while it was a bit glossy, it was interesting and complex regarding Dracula's personality and hey, it had Gary Oldman!!!

Using a "Great White" song as the title of this post was sinful !


1. Vampire In Brooklyn--In a silly twist, Eddie Murphy plays more than one character in this classic vampire flick.
2. Fright Night--I'm a sucker for titles that rhyme. I haven't been this intrigued since, "Duck Fuck!"
3. UnderWorld--Kate Beckinsale can suck my...blood...anytime she wants. And by, "blood" I mean, "cock."
4. The Lost Boys--The story of brothers Michael and Sam. Michael becomes a vampire and sucks blood. Sam eventually becomes a crackhead and sucks the glass dong. Cry little mister.
5. Queen of the Damned--R.I.P Aalliyah...4-eva!

What is wrong with me...I am still on your zombie post!!! I cannot get it out of my head, how to survive a zombie attack!!!

Eventhough it didn't follow the book worth a damn, I loved Queen of the Damned. I thought that the music by Jonathon Davies was the ultimate Rock Vamp Opera.

Good list, I haven't seen #2 & #1 because, frankly, they're old. But, you know what, since you recommend them, I'll watch them. I liked Fright Night, too.

The Lost Boys will always be on my list...

What about Interview With The Vampire or Bram Stoker's Dracula? I always think of those two. :)

Bruce - I kinda liked Coppola's version of Dracula, but it was a bit ponderous for my liking. But ya gotta love Oldman.

WLC - I hated Vampire in Brooklyn, but the rest were good.

Evyl - I was a fan of those 1st three vampire books (they turned awful quickly afterwards), but I didn't like the movie that much. Interview was actually a better pic, in my eyes.

Girly - The Lost Boys was a close also-ran for me. But it easily could be in there instead of FDTD or Vampires.

"If you can find pussy for cheaper, fuck it!" Hahahah, that movie's awesome!

Mr. Poopie - I FREAKING MET CHEECH MARIN YESTERDAY! SERIOUSLY! I saw him and Tommy Chong just walking on 54th Street in Manhattan. Chong was engaged with someone so I just went up and introduced myself to Cheech. My favorite celebrity sighting of all-time!