The Devil made me do it!

This has been both more fun and a lot more work than I originally anticipated. Phew! Where were we again? Oh, that's right! 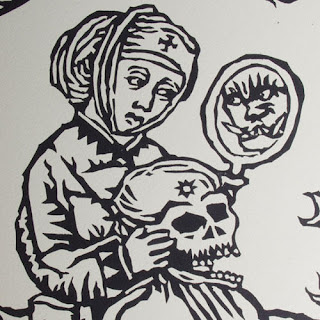 Earl's Top Five "Other Side" Films
I know this is gonna be a tough one for me. So many great films to choose from in this category and few absolute iconic choices in there as well. First, let's define "other side" films as any that deal in the paranormal (ghosts, witches, etc...), or with demonic possession or any kind of deviltry. How do I pare that down to just five, you might ask. Not an easy task.

I think horror films, more so than any other genre, lend themselves to repetitive viewings. So I want my scary movies to be almost as scary on the fourth viewing as they were on the first viewing. This leaves out neo-classics like The Sixth Sense and The Others...films with a twist. The Sixth Sense is a fantastically scary film. The first time you watch it. And then the last act occurs and you realize it wasn't all that scary after all. So I'm leaving it out. So I'll try to cover all my bases here and include some ghost stories, some demonic stories and the like. Let's see how it all pans out.

5. Poltergeist (1982) - Written by Steven Spielberg and directed by Tobe Hooper, this one had blockbuster written all over it. And it doesn't disappoint. While a lot of it was light-hearted and goofy, when things got bad they REALLY got bad. A kid is sucked into the TV, a killer clown doll, maggoty meat and faces getting ripped off. This is one scary ghost story. Serves those mother-fuckers right for desecrating holy ground like that. I still get a chill whenever the slutty teen aged daughter comes home to all hell breaking loose. Her reaction ("WHAT'S HAPPENING?!?") is priceless and chilling. Also creepy to watch now since both she and the actress who played the young girl died tragically soon after the film was released. Crazy.

4. The Exorcism of Emily Rose (2005) - Most of the scary films that I have seen in my life come from a time when I was much younger and much more prone to getting frightened. This film scared the piss out of me just last year. Actually, Gia and I are gonna watch it again tonight. She has never seen it. I can't wait! The absolute star turn handed in by Jennifer Carpenter as the possessed girl is nothing short of amazing. The filmmakers were able to bypass a good deal of planned CGI simply because she was able to contort herself into those creepy positions all by herself. She supposedly even freaked out the crew of the film with her talents. I liked the courtroom drama premise as well. This is one scary flick!

3. The Exorcist (1973) - I hemmed and hawed about including this one, but eventually I just had to remember how much the commercials for it scared the crap out of me when I was a kid. The music, the scenery and that green pea soup. Wow! I don't know if a tale of demonic possession can get any scarier than this. And great acting all around from Ellen Burstyn, Jason Miller, Linda Blair and Max von Sydow. I've only seen it twice in my life and I'm not looking forward to seeing it again any time soon. It's THAT scary!

2. The Omen (1976) - The 70's were a glorious time for satanic horror films, weren't they? It's the tale of an American diplomat who slowly finds out that his son may be the living incarnation of the Anti-Christ. That's gotta be hard on a dad. As was shown in The Exorcist, it's scary as hell when kids are shown to be in danger of spiritual forces. But when it's the kid himself who is the agent of evil...well, that just takes it to another level. The final scene of the film at the funeral has the creepy kid break the third wall and stare with evil intent directly at the audience. That's just fucking wrong, man!

1. The Shining (1980) - This adaptation of Stephen King's novel works on just so many levels. It's a ghost story, a cabin fever/man with an ax story and a possession story all wrapped up in one tidy 146 minute film. The casting of Jack and Wendy Torrance was beyond brilliant and Jack's descent into madness is portrayed perfectly by auteur Stanley Kubrick. The film is actually much better than the excellent novel, in my opinion. Whereas King often takes things too far with his work, Kubrick found a more subtle form of madness. Nicholson hamming it up through the 2nd and 3rd acts helped a lot as well. "Wendy? Darling? Light, of my life. I'm not gonna hurt ya. You didn't let me finish my sentence. I said, I'm not gonna hurt ya. I'm just going to bash your brains in. Gonna bash 'em right the fuck in! ha ha ha!" Indeed.

Honorable mention: The Wicker Man (1973), The Haunting (1963), The Blair Witch Project (1999), Burnt Offerings (1976), Season of the Witch aka Hungry Wives (1972). That last one was written and directed by George Romero as well. That cat made some absolute classics back in his day!

Did I miss any? Hmmm?
Pissed in the corner by Verdant Earl at 12:01 AM

Good gravy, man! Have you lost your mind??

Mere 'honourable mentions' for Wicker Man? The Haunting? Blair Witch? The first two of those would walk into my top three, never mind five. And Blair Witch, the sound on that movie is absolute pure fucking genius.

Weirdly, I have not yet seen Burnt Offerings. One day though.

I do think The Shining is wholly over-rated though. Nice looking film and everything, but it's not even one of Kubrick's five best movies.

badger - I love...LOVE the original Wicker Man. But purely as a horror film, I can only put it as high as 6 or 7 on my list. It's only the ending that is truly horrific and the rest is just weird fun. I used to think the same thing about the Shining, but it is now my third favorite Kubrick film after A Clockwork Orange and Dr. Strangelove. And it's great horror.

I had a friend who's Georgetown dorm was a couple hundred feet away from the steps that were featured on the Excorcist. There was always some creepy dude reading the Excorcist book at the top of the steps.

im right with ya on this one.

kudos to you for listening to my plea that poltergeist should be on the list.

i'd probably switch emily rose and blair witch, but thats just me. For MY money, blair witch should be on that list somewhere...

I'd probably give HMs to Stir of Echoes, White Noise, 13 Ghosts (the remake), Sleepy Hollow, and The Watcher in the Woods, although I've only see that one as a kid, but it scared the fuck out of me.

Hi friend,how are you? what are you doing now? where are you from?
I often visit to your site.it's very interesting and useful.I would like to link exchange with you.if you can ,add my blogs into your site and drop me a comment.I'll do the same immediately.I have 9 blogs.just check them out.I LIKE TO KNOW ABOUT YOU TOO.thanks.
http://www.indianmasalamullu.blogspot.com/
http://www.indianstamilmasalas.blogspot.com/

Zibbs - Everyone says those Georgetown steps are just as creepy today. I never wanna find out.

Slyde - I loved Blair Witch, just not as much as you. I remember that you still kinda thought it might have been real even after you saw it. You were really freaked out!

Adam - I liked It even though it was made for TV. Tim Curry was great as Pennywise. Parts of Fallen were great, but as a whole it was a little lacking. The Ring was creepy and would fit in my Top 10 probably. Witches of Eastwick? Really? Dude! I did like the 13 Ghosts remake, though. Not enough to put it on my list, but I liked it.

Lusia - Heya! I don't blind link exchange, but thanks for the comment.

Okay, okay . . . .I've been with you so far, but I suppose it was just a matter of time before you mentioned a travesty like Emily Rose. I do agree that HER acting was good, but the movie was not only anti-climactic but definitely not scary. Actually, it was down right boring right up until the barn scene. No thrills from this flick, sorry man.

Poopie - I agree that the ending wasn't necessarily scary, but we just watched it again last night and I really loved it. And I thought it was scary. Different strokes, ya know.

Despite having seen Poltergeist 15 times, I've still never uncovered my eyes for the scene where Craig T. Nelson's face falls off. :)

GodDamn, you put some work into that. Nice read, though.

Strange as it may seem, I actually agree with you on this one. "The Shining" was brilliant. Kubricks one foray into horror and he did a supurb job. "The Excorsist" as classic as well, only because it was one of the first films of it's type and because of the sobbering back story about Father Marin.

"The Blair Witch Project" as honorable mention?....puhleese, I actually walked out of that film, I thought it was that bad.

I would add in it's place, "Village of the Damned", an often overlooked and excellent film from the British point of view.

Bruce - Blair Witch isn't for everyone, that's for sure. And the original Village of the Damned was a great flick. The remake? Not so much.

This genre is my *favorite.* Possession is replete with subtle nuances about life, sex, religion, etc.

I have a cousin who thought she was possessed several years ago. We found out that she was mentally ill. Dr.s medicated her to the point that she stopped scaring the crap out of the rest of us.

But, you know, I always wonder, who's to say she wasn't both? Mentally ill and possessed? Because who wouldn't become mentally ill after having been possessed?

I'm feeling a little awkward about how much I just shared there. But, hey, it was topic relevant. Kind of.

I've never felt the same way about clowns after "Poltergeist." My husband and I watched it last Halloween and I could watch it again this year. And yes on "The Shining!" That quote you cited is my favorite from the movie. Good picks!

I've watched lots of horror movies and only one really freaked me out - The Exorcist - specifically the scene where she spun her head around. I was probably around 12 when I saw it. Then years later, I saw the unedited version and the spiderwalk thing also freaked me out. By freaked out, I mean that I didn't want to be alone in the room to watch the rest of it.

Faiqa - I have a cousin who went thru the same thing. See, I shared too! :)

J.Hi - Jack was positively out of his mind in that scene.

It may not be scary but you can't talk about ghost movies without talking about Ghostbusters.

Evyl - True. But I've been trying to limit these discussions to horror films and Ghostbusters is pure comedy.