A couple of bits of fluff for ya!

To continue my week of posting nothing but crap, here is the trailer for the new Norwegian horror film Dead Snow.

Love the Temple of Doom reference in that clip.
Hat tip to Stacie Ponder over at Final Girl for bringing this one to my attention. Well, it wasn't really her. It was one of her fellow AMC-TV bloggers, but I wouldn't have found it if it weren't for her. So she gets the nod.

What a brilliant idea! Not just zombies, but fucking Nazi zombies! As if you couldn't hate zombies or Nazis any more. They are the two great tastes that taste great together! It's not totally original. Back in 1977 there was a movie called Shock Waves that tried to get these lovable fiends together, and I'm sure there have been others. But this one takes place in an isolated cabin in the remote woods of Norway. Huge win all around!

It's also supposedly playing at the Sundance Film Festival this year, although it isn't listed on Redford's official site. So who knows? All I care is that is coming soon to a freakin' theater near me! Slyde, you in? It's already in my Netflix queue.

Let me just say it one more time for effect.

Also, Ookami of the Snow found this neat-o application from Marvel that lets you create your own superhero. I had tons of fun on this site (even with weird problems trying to download the pics) and so should you.

Here are a couple of superheros that I created. 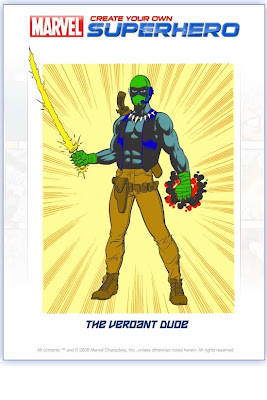 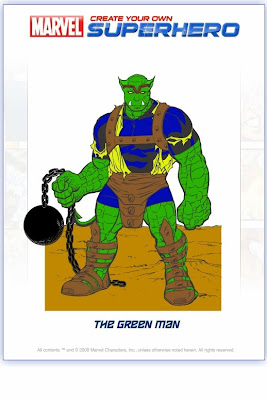 I don't know why my superheros come out so violent. Particularly The Verdant Dude. Look at that guy. Some kind of an energy sword, an energy fist, a shotgun and a pistol. Plus those spikes on his knuckles. Don't know what I was going for there, but it was fun.

Dead snow looks fantastic. And not only a Temple of Doom reference, but one said while wearing a Braindead t-shirt! That's aka Dead Alive to you American folks, I believe.

Looks very, very good indeed. And references up the swanny!

I LOLd at the title! The Verdant Dude looks just like I imagined it. Or you, that is.

Now excuse me while I go create my own superhero.

The scariest snow-based horror movie I ever saw was called, "yellow snow". Only it was less scary and more disgusting.

Badger - yeah, it's Dead Alive over here and I didn't notice that. Noice!

Jiggs - Frank Zappa did the soundtrack to that one, right?

It is the simplest ideas that are the best. Nazi zombies? Sign me up (to kill them, not to be one, that would suck).

i meant to tell you about that superhero site a few weeks ago when i found it. its pretty fun!


im in for the nazi zombies...

Ah, the heromachine! That was a program made by some random guy about 10 years ago and it was awesome. Good for Marvel for buying it from him - it's fun to play with.

Here's one I made a long time ago that I still have online:
http://avitable.com/adam/blog/CaptArgumentative.jpg

When I saw your update in my Blog List, I thought (because this post's title is in German) that it said "The Verdammt Dude" instead of "The Verdant Dude"(verdammt is German for "damned").

I'm going to create my own superhero and I'll get back to ya!
I imagine she will be badass and have some sort of skull representing the edge-you know!
Love it!

Ookami - should have been done years ago.

Slyde - keeping things to yourself again. I don't even know you anymore!

Adam - Nice! Looks a bit different, but it is great fun!

Steph - My German is limited to counting to 10.

I have no inner superhero. Supervillians have much more fun.

I've got to see this.

Evyl - my guys came out looking like villains, so I concur.