OK, not really. Just pretend the words and pictures are leaping off the page. Like lemmings off of a cliff.

What was I saying? Oh yeah. 3-D. I went to see My Bloody Valentine 3-D over the weekend, and it rocked the house! Oh, it wasn't a good movie. Far from it, in fact. It probably wouldn't be a stretch to call it terrible. But the 3-D fun made up for it all. It made it awesome! 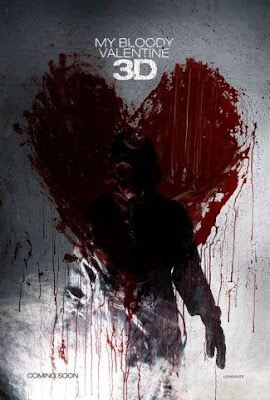 Apparently 3-D effects have gotten much, much better over the past 25 years or so. Now it isn't just a handful of special effects that pop out every once in a while. The entire film was in 3-D. Every shot in every scene. Made for some very cool effects.

But you know the best part of seeing this particular film in the theater? I saw it in Jamaica, Queens in the middle of the day and me and my buddy were the only two white dudes in the entire building. One minute into the film we knew we were in the right place at the right time. Chatter and talking back to the film were accepted, even encouraged. When I'm seeing a piece of crap film like that I like to treat the viewing like my own personal episode of MST-3000. Slyde knows what I'm talking about. Ask him about the time we saw Cliffhanger in the theater sometime. That was a classic adventure.

My advice: If you want to check your brain for a little while and go along for the roller coaster, then go see this film.

(This is the part of the post when Slyde decides that he is gonna trash me in the comments section for going to see it without him. Sorry, dude.)

Amy and I saw that this weekend, too, and we laughed our asses off. It was a total blast, and the 3D is what made it so fun. The movie's designed to be cheesy fun, though - it's not trying to be a serious horror. I don't think.

Oh man... you make me really want to see this now!

There you go with your sneaky titles again. And to think I was rummaging around for my 3D glasses.

I want to see this film but i have a question for you....

Will i be frightened????

Avitable - exactly. Cheesy fun. That's what it is.

Expat - I think we are about 3 years away from 3-D blogging. It's gonna rock!

Diva - was your little brother at least BORN in the 80's? Crap!

OMG!So it is true! I love the scene in Scary Movie Whatever when the girl is at "Shakespeare in Love" and she's on her cell phone talking, eating fried chicken, talking to the movie...
Classic.

Just for the record, is ANY 3-D movie actaully GOOD, aside from the 3-D effects ? No.

i actually want to see this movie, warts and all. Most of the reviews say, as bad as the movie is, the 3d is so good that it makes it a good experience...


p.s. you suck for not asking me to go. but you knew that.

I don't think I will see it, but I am intrigued about the 3D aspect of it.

WLC - inside humor. I LOVE IT!

Candy - Richard Pryor used to do a funny bit about watching Jaws in an all-black theater. So did Robin Williams, but it was funnier when Pryor did it.

Slyde - it's so worth it. And I already apologized. Like you would have gone to queens anyway.

Ookami - they call it True-D now, because the entire film is in 3-D. I was impressed.

Lookin' forward to seeing this one.

To me, that is the perfect reason for a movie - checking the brain and going along for the ride. :) I love special effects so I definitely want to see this one.

Zibbs - you will love it.

Teeni- the 3-D was amazing!

I'll have to watch it. I heard they had midgets.

Evyl - the midget is still making me smile. :)