'Tis the gift to be simple, 'tis the gift to be free,
'Tis the gift to come down where you ought to be,
And when we find ourselves in the place just right,
'Twill be in the valley of love and delight.
When true simplicity is gain'd,
To bow and to bend we shan't be asham'd,
To turn, turn will be our delight,
Till by turning, turning we come round right.
- "Simple Gifts" Elder Joseph Brackett (1848)

One of my favorite moments from President Barack's Inauguration the other day was the John Williams' arrangement of "Air and Simple Gifts" performed by Yo Yo Ma, Itzhak Perlman, Gabriela Montero and Anthony McGill. I was humming along with the tune when it broke into "Simple Gifts" and sort of, um, composing in mid-air. I don't know why. I'm not a fan of classical music at all. But the tune was unmistakable and I went along with it. I looked over at Gia and she was confused.

"How the hell do you know this?" she asked. She had never heard the tune before, which I found amazing because she knows so much about music. I even sang a bit of "Lord of the Dance" hymnal which was written using the "Simple Gifts" tune. Nothing. She had never heard it before.

So I went into a long explanation about "Simple Gifts" that I will share with you all now.

The song was written by an Elder within the Shaker community in 1848. His name was Joseph Brackett. The song was most likely written as a dance song, but it is often thought of as a hymn. There used to be a bit of confusion regarding the origins of the song. Some thought it was much, much older thinking that it went back to the Middle Ages and beyond. There was also some confusion about whether or not it was originally a pagan song that was converted to a Christian hymn (mostly to do with a neopagan version of the song produced in the '70's). Neither of those is true, by the way.

Most folks in the U.S. or U.K. will recognize the tune either from it's incorporation in the ballet "Appalachian Spring" around 1944 or from "Lord of the Dance" itself written by Sydney Carter in 1963. "Lord of the Dance" is extremely popular still today as a hymn in masses from many different denominations of Christianity. Oh yeah, and Michael Flatley. Yikes.

So why the hell do I know about this at all?

Because of the Internet. And comic-books. 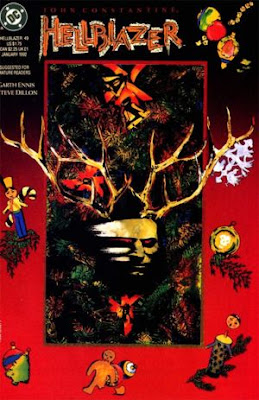 You see, I was a big fan of this one title called "Hellblazer" in which the protagonist was a streetwise mage named John Constantine. Don't confuse it with the awful movie starring Keanu Reeves. That film was so far from the uber-cool that was "Hellblazer"! Ugh. Anyway, issue #49 was a stand-alone written by Garth Ennis. Constantine spent the issue re-igniting the holiday spirit to a, well...um, Holiday Spirit. The Lord of the Dance.

Ennis took the tune and it's neopagan faux origins and created a this wonderful story. And I, of course, believed that the Christian hymn I had heard all of my life had it's origins in paganism. Why wouldn't I? And I'm a huge fan of all things with pagan origins. Hello? Green Man! Anyway, great story, great issue, great fun.

A few years later I was at Mass with members of my family and my oldest sister and I got into an argument afterwards about the origins of "Lord of the Dance". Having read a whole comic-book on the subject, I was sure that it's origins were pagan. She, being smarter than I, disagreed. She thought it was always a Christian hymn. Turns out she was right, but I only grudgingly agreed after a night spent (on dial-up) looking into the origins of the damned thing.

So that's it. That's how my mind works. Something piques my interest and I dive into it. I really don't know how I would live without the accessibility of the Internet.

Oh, one weird thing I found out while looking all this stuff up again? The Shakers are pretty much all gone. As of 2006 there were only 4 practicing Shakers left in the world up in Maine somewhere. Their strict belief in celibacy ultimately thinned out their numbers to non-existence. They used to maintain their numbers through conversion and adoption, but the government put the kibosh on adoptions by religious organizations a while ago. And who wants to convert to a belief that is so staunchly celibate? I had no idea about all this. Weird.

Labels: This is my brain on comic-books

Our music teacher taught us this song back in fifth grade. I didn't think I'd see it here though. LOL. Isn't it neat how you can do research on the internet when the mood strikes? It's like doing homework but way better because it is about stuff you actually WANT to know! :)

I finally decide to play the challenge and this is what I get: We are currently scoring yesterday's results! Nice. I'm off the hook.

I liked that tune the other day and had absolutely no idea where it came from. Thanks for the history of music lesson. (and how awesome is it that you know it via comic-books?)

Wonderful post, Earl. I immediately went to youtube, in the middle of your first paragraph, to listen to the tune. (I couldn't live without the internet now either) The haunting familiarity of the music has my head spinning right this minute. I don't know where I've heard it in the past, but I have.

This has happened past a few times before, the solution was that Emerson, Lake and Palmer had introduced the music into my brain during a drug haze.

That is a good issue. Hellblazer is still a great comic, too.

Although, I didn't mind the movie, even though they made him American.

Interesting...On a tangential note, there's a tune on the latest Weezer album(the Red one) called"the Greatest Man That Ever Lived(Variations On A Shaker Hymn)".

i love yo yo ma. seriously, anything that man touches is golden.

also, i had no idea that the movie Constantine was based on a comic book. i enjoyed it, but then i enjoy almost anything that throws conventional Christianity on its butt.

When i was in the 7th grade i read a book from my school library about two shaker kids who fall in love and eventually succumb to their teenage hormones and in the end they are discovered and kicked out of the colony. i read it 4 times, oh the things that would get this sheltered mormon preteen humming (i'm pretty sure it would be rated G if it was a movie, that's how tame it was). anyway, eventually some other kid took it out of the library and word leaked to their parents that it was a SMUT novel (wasn't) so it was slated to be removed from the library, that's when i went ninja on them, and snuck into the library after school and STOLE IT!!! i still have it somewhere...

and now i will be humming that tune all day...even over the Shinedown that's currently coming from my laptop.

My mom is just like you. She'll hear a word or see an animal and will then spend HOURS looking up everything there is to know about it.

I don't usually have that kind of attention span.

Many times I have thought about traveling to the past, but then I remember there is no internet in the past so I decide to remain here, in current time.

Teeni - Homework sucked. I never did the reading that I was asked to do, but I would read anything else that I wanted to.

Avitable - Wow. Didn't mind the movie. I'm sorry, but I don't understand that.

Diva - that sounds familiar. What was the name of the book?

Britt - With the accessibility of the web, I actually have a hard time reading books now. Because I come across something that I want to know more about I will put the book down and wind up spending hours reading about it. Crazy.

Ookami - I want future time. When we all have immediate access to the web just using our brains.

The inaugural tribute was indeed beautiful. I had no idea of it's origins. This, of course, makes it much cooler. Thanks

hey, i have that issue of Hellblazer too.

i remember that issue. didnt he throw a big holiday get-together at his flat? it was pretty well-done...

Hm, i found the book: http://www.fantasticfiction.co.uk/y/jane-yolen/gift-of-sarah-barker.htm but it turns out they were a Shaker colony, not a Quaker one...

still... i went Ninja on that school library's ass.

You've taught me some things I didn't know about the tune. I was going to make a smart-assed comment, but now I can't now, because I respect you, ya big baby.

Diva - we were talking about Shakers. Did you mean it was a Quaker community?

I to found this part of the inauguration very moving. I know the tune well from having listened to Appalachian Spring thousands of times while I have hiked in the wilderness. I think it probably the most beautiful peices of music every written.

Shakers. Celibate. Hee hee. Am I the only person random enough to think that the "Shakers were celibate" is funny? Because you know, in the colloquial, "shaking it" has a sexual connotation. Heh. No? OK.

Bruce - I've always loved it too.

Faiqa - I get ya. The Jerkers, the Wankers and the Friggers didn't last long either. ;)

That was one of my favorite hellblazers too. - rom (smoke.ph)

The name yo yo ma always cracks me up.