FYI - Liv Tyler screaming her balls off over at the Moviegrenade. What, she doesn't have balls? You sure?

OK, I promised Becky I would root for that OTHER football team from Pennsylvania in this Sunday's Super Bowl. And I will. Plus, I have no love lost for the Cardinals who used to be in the old NFC East along with my Eagles. Fuck them!

But I do have a bit of a soft spot in my heart for Kurt Warner. 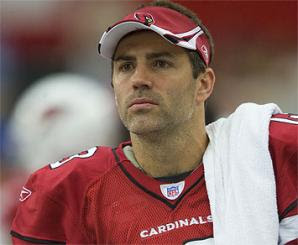 The guy made me a bunch of coin back in 1999 in my office fantasy football league. No, I had never heard of him before the season. But I had drafted Vinny (from Elmont) Testaverde as my starting QB and he ruptured his Achilles tendon in the very first game of the season.

So I looked around the boxscores and the only starting QB that wasn't drafted in my league was a dude named Kurt Warner who won the starting job in the pre-season when Trent Green went down with an injury. I already had the Ram's RB, Marshall Faulk, on my squad so I figured I might be able to double up on some points when the two connected.

And boy, oh boy did I rack up the points that year. I rode Warner's hot ass (not literally) all the way to a Super Bowl win in our league that year. It wasn't even close. I destroyed the competition.

It was the only season I came even close to winning that league. And it wasn't because I drafted well or put together a well-balanced team. I got lucky when Testaverde got hurt for the year and Warner was available. I wonder how many other fantasy football fans that happened to in 1999.

So good luck to both teams this weekend. I'm hoping for a great game and a Steelers victory. But if my boy Kurt Warner does something heroic, I won't be surprised. He's done it before.

My husband is a huge Steelers fan so it's like Christmas at our house.

I'm not into football all that much (basketball girl here!) but I saw Kurt Warner on The Biggest Loser tonight and he was sweet on the show so yeah, good times.

i forget, is this the sport where they swing the little bat, or the one where they throw the ball thru the hoop?

I am going for the Cards all the way. But from what I have seen Kurt Warner is a great quarterback and an even better guy in real life. I am glad that he get to play in another Super Bowl.

I give not-a-shit about the SuperBowl, but I'll watch for the commercials, and the appetizers spread before me.

Bella - does that mean you get presents?

Hilly - was he doing some kind of motivational thing or was he just trying to lose a few?

Slyde - it's the one that men watch.

Heff - It's worth it for the Sunday beers and nachos alone.

Kurt is pretty much considered GOD here in Phoenix these days. The Cardinals have been a running joke ever since they moved here 20 years ago and everyone is still in disbelief that they are in the Super Bowl. You don't here anything about pretty boy second string QB Mat Leinhart anymore. I have my doubts that the Cards can pull this off.....but I will be watching...bound to be interesting.

I don't really care who wins on Sunday, but I am kinda rooting for the Cards. I'm a sucker for the underdog.

And, umm, that year of Warner and the fantasy football you speak of- that wouldn't be the year that Tommy and the Dynasty That Is The New England Patriots whomped there ass in the Super Bowl,would it?

He was running a challenge for the contestants. This one kid who is just under 400 pounds was faltering in the running back and forth on the field and Kurt ran beside him and encouraged him the whole time. It was touching.

Bruce - I can just imagine how much he is revered in that town these days.

Candy - Um, no. They beat the Titans that year in the Super Bowl. It was 2001 that Tommy Bunchen and the Patsies beat them. Ha!

i thought it was the one where men actually PLAY, not watch...

Dude ditto on the fact that football is not my thing!!! My TV never even had a football game on this entire season!!! In other words i do not care!!

But i will root for whoever you root for!! Just because you have good taste in football and football players!!!

In other news, my toe is still broken!!!

Slyde - what? you don't like to watch men play? That's not what you told the boys on Fire Island.

Michelle - its worth watching for the commercials alone.

for the millionth time, your fantasies just dont equal reality

KURTIS THE STOCK BOY AND BRENDA THE CHECKOUT GIRL

In a supermarket, Kurtis the stock boy, was busily working when a new voice came over the loud speaker asking for a carry out at register 4. Kurtis
was almost finished, and wanted to get some fresh air, and decided to answer the call. As he approached the check-out stand a distant smile caught his eye, the new check-out girl was beautiful. She was an older woman (maybe 26, and he was only 22) and he fell in love.

Later that day, after his shift was over, he waited by the punch clock to find out her name. She came into the break room, smiled softly at him, took her
card and punched out, then left. He looked at her card, BRENDA. He walked out only to see her start walking up the road. Next day, he waited outside as she left the supermarket, and offered her a ride home. He looked harmless enough, and she accepted. When he dropped her off, he asked if maybe he could see her again, outside of work. She simply said it wasn't possible.

He pressed and she explained she had two children and she couldn't afford a baby-sitter, so he offered to pay for the baby-sitter. Reluctantly she
accepted his offer for a date for the following Saturday. That Saturday night he arrived at her door only to have her tell him that she was unable to go with him. The baby-sitter had called and canceled. To which Kurtis simply said, "Well, let's take the kids with us."

She tried to explain that taking the children was not an option, but again not taking no for an answer, he pressed. Finally Brenda, brought him inside to meet her children. She had an older daughter who was just as cute as a bug, Kurtis thought, then Brenda brought out her son, in a wheelchair. He was born a paraplegic with Down Syndrome.

Kurtis asked Brenda, "I still don't understand why the kids can't come with us?" Brenda was amazed. Most men would run away from a woman with two kids, especially if one had disabilities - just like her first husband and father of her children had done. Kurtis was not ordinary - - - he had a different mindset.

That evening Kurtis and Brenda loaded up the kids, went to dinner and the movies. When her son needed anything Kurtis would take care of him. When he needed to use the restroom, he picked him up out of his wheelchair, took him and brought him back. The kids loved Kurtis. At the end of the evening, Brenda knew this was the man she was going to marry and spend the rest of her life
with.

A year later, they were married and Kurtis adopted both of her children. Since then they have added two more kids.

So what happened to Kurtis the stock boy and Brenda the check-out girl?

Well, Mr. & Mrs. Kurt Warner now live in Arizona , where he is currently employed as the quarterback of the National Football League Arizona Cardinals and has his Cardinals in the hunt for a possible appearance in the Super Bowl. Is this a surprise ending or could you have guessed that he was not an ordinary person.

So, my moneys on the Cardinals and your boy Warner!

How's that trivia game on "Lakes" coming along???

The Cards have been doing the impossible all year. They might have a shot.

thanks for agreeing to be in the black & gold corner this sunday. should be a great game. all super bowls are, really. regardless, this is history in the making.
GO STEELERS!!!