I love digging into someone's iPod to see what kind of weird stuff is on there. I'm guilty of having some sappy crappy stuff on my machine. I'm sure we all have something in there that someone else would think as weird.

One of the weirdest things I ever found was The Andrew Sisters version of "Rum and Coca-Cola" on Gia's iPod. It's actually a very cute and catchy Calypso tune, but something you don't expect to find. Normally. But whoever said Gia was normal. She digs me, after all. That ain't normal.

I was just thinking about it last night and I decided to look it up on the old Interwebs so I could post it for y'all. What I found was soooo much better than just some lame Youtube video. No, what I found was gold. Gold, Jerry! 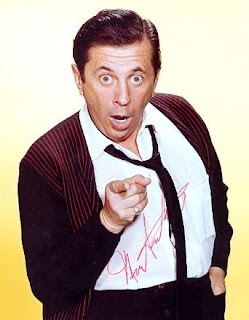 I went to the Wikipedia, as I am apt to do, and saw that Morey Amsterdam was listed as "writing" the song. Remember Morey? He was part of the comedy writing team, along with Dick Van Dyke and Rose Marie, on The Dick Van Dyke Show. He played Buddy Sorrell, probably he most well known role. I loved that show. Morey was hilarious on it, and it's a clear pre-cursor of shows like 30 Rock. That "behind the scenes" look at a hit television show. He also played Cappy in Frankie and Annette's Beach Party movies.

But, of course, Morey didn't really write the song. When the song was first recorded here in the US, Morey was listed as the lyricist and he copyrighted the song. Problem is that a Calypso artist from Trinidad named Lord Invader (really) actually wrote it. Morey plagiarized the tune, and it became a big hit for him with The Andrews Sisters. He first heard it in 1943 when he visited Trinidad with a USO tour. I'm also trying to wrap my mind around why the USO would be visiting lovely Trinidad during the height of World War II. Which soldiers stationed in Trinidad* during World War II really needed their spirits raised by entertainers? C'mon.

So Amsterdam heard the song while entertaining the troops, loved it and then he wrote his own version of it that lessened the original's political message. And, um, well...he kinda implied that the women "working for the Yankee dollar" were whores. Booze and whores? Why wouldn't it be a huge hit here in the US? Ha!

The surreal shit you can find out on the Interwebs these days, eh?

*I will readily admit that I am too lazy to look up why we had soldiers stationed in Trinidad during World War II. So forgive me if I spoke out of line here.

I must confess to having one or two turkeys tucked away on my ipod.

Edith Piaf definitely being one of the worst. Don't ask me how to delete it, I'm over 35.. I wouldn't have a clue.

You don't remember the story of the 15th regiment, the Trinidad Terrors?

I am rockin to the song right now!!

Thanks for the wonderful story about Morey Amsterdam. What an opportunist he was.

This is like a fundie message. Include the Lord in all your business from the beginning.

i did not know that, sugar! who says blogging is a waste of time? xoxox

Booze and whores, the best way to start a morning!

I seriously laughed out loud when I saw the title of your post in my reader.

Jimmy - I think it entails throwing it away and buying a new one.

Kiki - you know, I meant to go on about how much I dig the name Lord Invader, but the post was getting a bit long in the tooth. Too bad I didn't know of this name when we got the kittens a few weeks back. One of them would have definitely been Lord Invader.

Adam - there has to be SOME kind of story. That's as good as any.

Michelle - Gia says "you are most welcome"

MikeB - Morey was an interesting character. He worked in a club owned by Al Capone in Chicago and only moved West to LA when he found himself in the middle of a gunfight.

Savannah - Oh, its a huge waste of time. Especially my blog. ;)

Paige - I knew I would sucker someone in.

Heff - I'm the king of useless info. I want a crown and a scepter.

"it's a clear pre-cursor of shows like 30 Rock." Did you come up with that yourself? That's very... clever. And true. And I never thought of it that way. I loved that show. "OH RAAAAAAWB!!!" (Wasn't that his name on the show? Rob Petrie? Am I making that up?!!)

Faiqa - It came to me like a vision. ;) Yeah, I had never thought about the similarities until I was typing that paragraph. And you are right...it was Rob and Laura Petrie. Well done. You win a no-prize.

Very interesting and I like that song. You would love muy Ipod. I have all kinds of odd stuff.

I have cool playlists - especially for when I'm cooking. I love to put on songs that relate to what I'm cooking whether Bavarian Folk songs or Dean Martin.

Zibbs - nothing wrong with a little Dean-O.

I still don't have an ipod.
*hangs head in shame*