Now these suckers barely stop moving for a minute all day long, so it wasn't very easy to get pictures of them. But we tried.

Here they are just waking up from a nap. Wolowitz is on the left and Gogo Yubari is on the right. Kinda difficult to tell apart, eh? We know. Well, without picking them up to check under the hood. 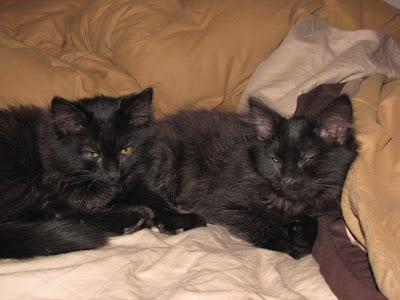 Wolowitz looks a bit darker colored than Gogo because she is a bit furrier. You can really tell it's her because of the extra tufty hair in her ears. As you can see they are very attached. They like to sleep directly on top of each other. See? 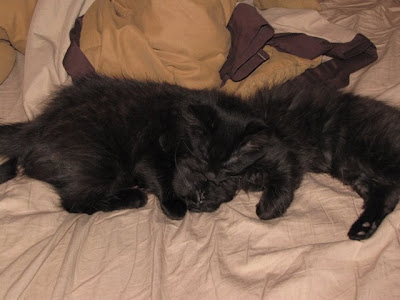 There's Wolowitz all by himself. They both have the same mustard colored eyes. Even though it doesn't come through in these pics. Their coats are mostly black with some brown and white speckled through. He's a big purrer and a big cuddler. Loves to be picked up. 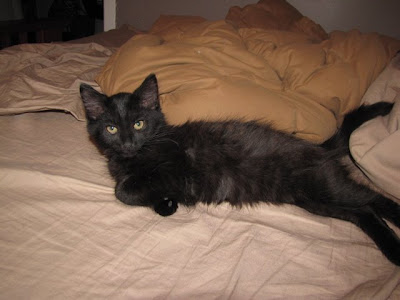 And there is Gogo. She's a bit more vocal than her brother. And so far (it's only been a little over a day) she is not as much of a cuddler. Maybe that will change. You can see how much fluff she has in this picture. 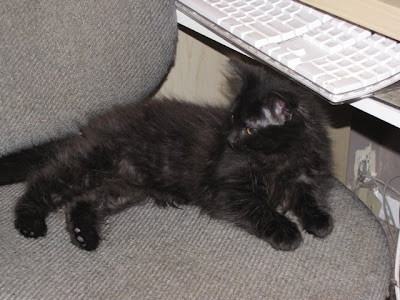 Let's not forget Sammi. She is none too thrilled with the new additions to the house. All they want to do is play with her, but she isn't into it yet. She is doing better than when we first brought them home, but it might take a few more days for her to adjust. 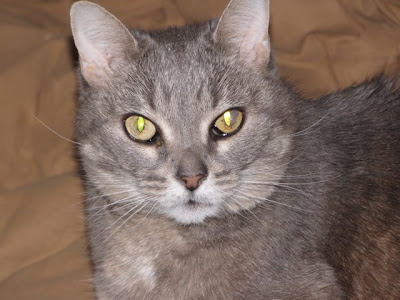 The new kitties are gorgeous!

AWWW! You know, Im usually a dog person but all baby animals are awww inducing.

every once in a while my older dog will look at his christmas gift (six years ago i gave him a german shepherd puppy) and then look straight into my eyes and sigh. like reilly is trying to tell me he didn't want a dog in the house. then other times i see them chasing each other and wrestling in the yard and the smile on his face lets me know he really does love his louie. i have a feeling your older girl will relax in a bit. sammie has kind eyes.

What's the betting that you and Mrs Earl refer to each other as Mommy & Daddy when you're around the 'new kids'?

b.e i love your new kitties!!!

They are so pretty and special!!

Have fun and enjoy the new additions to your family!!!

If Amy wasn't allergic to cats, I'd totally go get some kittens right now.

*squealing with excitement* They're so adorable!!! Ooooo I just want to snuggle their little heads!

They are ADORABLE! And very lucky to have a new loving home. Congrats.

Great. Good luck with them.

just how well do you think they will all get along after i sell you Simba?

Sammi's planning! That's why she's not into it yet. You can see it in her eyes.

I'd have some MAJOR difficulty telling those cats apart.

Bella - adorably annoyed describes her to a tee.

Becky - Sammi has one kind eye. Her left eye (you can't see it in the pick) is clouded over from an injury when she was a baby. She doesn't see too well.

Avitable - she may lose her allergies. I used to be horribly allergic to cats when I was younger. But around 6 years ago it all of a sudden stopped.

Slyde - weird in that we almost named Wolowitz Simba. Well, it was gonna be Simbawitz, Simba for short. We feel strongly about him having a Jewish name for some reason.

Jenn - you should see her grumble at them.

Heff - When they are right next to each other, I am okay. But when one of them comes to visit me I just say "Hello, kitten!"

my grandfather had one cloudy eye!! give sammi a squeeze from me.

told you she had kind eyes!

Sammi's got that look like, "Are you f-ing kidding me?"

Babies in da house! No one sleeps for a few days.

Becky - that's why she is named Sammi. After Sammi Davis, Jr. ;)

Candy - Tell me bout it. And we want to make things easier for Sammi, so Gia is keeping her in our bedroom at night while I sleep with the kitties in the other room. No sleep for Earl.

pretty effin cute, and i know from cute!!

Damn, damn, damn, I HATE being allergic to cats. I love cats. They are sooo cute, and my daughter keeps asking for one... maybe I'll just get the shots. Oh, and if you got just one more cat and were a single woman past retirement age, you could be the Internet cat lady! :)

Poor Sammi! Little buggers climbing all over her, I suppose!
Pearl

Congrats on the new additions to the family. Much quicker and cheaper than childbirth and if they don't work out, Child Protective Services won't come around harassing you.

So, is there some logic behind their names besides trying to embarass them?

Cute little bears you have there.

ohhhh, that sleeping on top of one another.....they are bunk cats is all.

Pearl - Heya! They just wanna be around her right now. She vants to be left alone!

Madge - They are snuggler muffins. All we do is take pics of them. :)

Bruce - I named Wolowitz. It was gonna be Simbawitz after a dog from a series of books by Andrew Vachss. Then Wolowitz became my favorite character on a stupid sitcom that Gia and I both enjoy. Gia named the female Gogo Yubari after the schoolgirl assassin from Kill Bill vol I. Yeah, so not so much with the logic there.

Oh, they are too fricking cute! I do hope Sammi adjusts. I guess she will have to get some "special time" with you guys so she doesn't get jealous or territorial. Female cats can be so finicky about that stuff. But I love your new additions to your family and hope they give you much enjoyment in return for all you are doing for them.

Poppy - will do. Have fun at the reunion tonight. :)

Teeni - They all slept with me this morning for a little while. Until one of the kittens bit Sammi's tail. Then all hell broke loose.

Hooray for kittens!
I left a comment about wheat grass for cats after your comment on my bloggity blog.