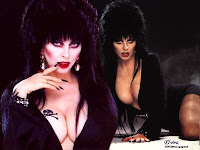 Whenever I want to really get to the bottom of something, I go to Wikipedia. I mean, if it's on the Internets it has to be fact-checked. Right? Anyway, here's what Wikipedia has to say about the Witches' mark or Witch's Teat or Witch's Tit, if you prefer. I prefer tits. If I was given a choice between marks, teats or tits I would probably pick tits every time. Unless I needed some milk for my coffee. I can't drink my coffee without some kind of dairy product. Half and half would be best, but I don't know how it comes out of the cow exactly. And where does buttermilk fit in? Wait, what was I talking about? 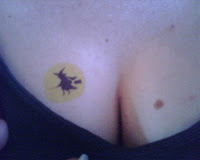 Oh yeah, Wikipedia and the Witches' Teat. "According to witch-hunters during the height of the witch trials (c. 1645), the witches’ mark (also called a Devil's mark or a witches' teat) indicated that an individual was a witch. The witches' mark, witches' teat, and the devil's mark are all terms applied to essentially the same mark. The beliefs about the mark differ depending on the trial location and the accusation made against the witch. {snip} Sometimes, the mark was believed to have been left by the Devil licking the individual." 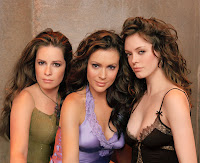 "The witches' teat is associated with the feeding of witches' imps or familiars; the witches' familiars supposedly aided the witch in her magic in exchange for nourishment (blood) from sacrificial animals or from the witch's teat[4]. It is also where the devil supposedly suckles when he comes at night to bed his faithful servants, sometimes impregnating them with his seed. Once the devilish half-breed has been conceived, the cambion may only feed upon this teat and no other. Folklore suggests that on the 7th day of the 7th week of consecutive feeding upon the teat, the cambion would grow to adulthood immediately and begin wreaking havoc with a range of demonic powers inherited from its supernatural father. {snip} Witches’ marks were commonly believed to include moles, scars, birthmarks, skin tags, supernumerary nipples, natural blemishes and insensitive patches of skin." 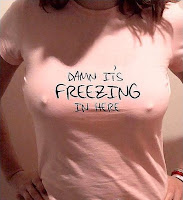 And in current culture and slang you can find mention of the witch's teat when talking about something like the weather when it gets particularly cold. Wikipedia says so. "The "witch's teat" has been adapted to mean something of a cold or foreboding nature. A common function of the word as slang is used as a representation of cold temperatures. An example of this is: "It's colder than a witch's teat out here!" or "Teats, it's cold!" The first time I had heard this expression was while watching the film All That Jazz with Roy Scheider. Someone said that one of the dancers was "uglier than a witch's tit." Someone else argued that the proper phrase was "colder than a witch's tit." I was 13, so all I cared about was "tit". Of course.

So yeah, it was colder than a witch's tit in New York yesterday.

Bella - just an excuse to talk about my favorite subject. ;)

Great post. Is that Elvira up at the top?

Apparently witch's tits are the same temperature as shit, too, because I heard someone say that it was cold as shit out there.

man, i love tits so much

I love the cartoon at the end. Feeling up the witches tits to see if they are really cold!!!

I giggle gladly with you today!!! I think today is even colder than a witches tit!!!

MikeB - the one and only.

Kiki - they make me so happy.

Michelle - a balmy 16 degrees here on the North Shore of LI this morning. Brrr.

I can't be sure about a witch mark on her titties, but I've heard that my mammy-in-law has a boil on her arse the size of a small continent.

Can't wait for the explanation of "colder than a well digger's ass."

hahaha! Nice work. I use the expression "colder than a witches tit" more often than not.

So THAT's where Minnesota people got the saying..... "Colder than a witches tit!" I actually use the saying 3 months out of the year. THANKS for the Wiki information! So informative.

Jenn - I don't know how you kids in Minnesota do it.

All I know is that Alyssa Milano is probably in my top 10.

I always heard "Colder than a witch's tit in a brass bra", but I always liked it, nevertheless.

i have that same t-shirt..

Heff - that does sound cold.

It is just hotter than hell here in Phoenix today...supposed to be 80 degrees.

In keeping with the 'tit' theme, if you haven't seen this You Tube video..you need to check it out. From way back in my blog archives...I guaranttee that you will LOVE it.

Wow. I could have gone my whole life without ever have wondering or knowing about that phrase. Thank you so much for expanding my horizons.

Bruce - thanks for rubbing it in. Oh, and that video is no longer available on Youtube. Rats.

My boobs are nice and warm. The rest of me, however, is FUCKING. FREEZING.

Poppy - damn, girl! It's cold outside! Fifties this weekend, though. Yay!

Evyl - in more than words alone, if you know what I mean.

LOL. Well, at least I learned a thing or two from this post, even though it was just to say it was cold. ;)

Wikipedia is my own brand of heroine!

And I prefer the term "nipping" myself.

~E - Addictive as all hell.

And here I tits were just for milk and playtime. Who knew there was a weather lesson behind them (or should that be "on them")

Marty - Tits have many levels. Hehe.