Not again. Not this time.

I've been guilty in the past on missing out on some of the best that television has had to offer when they originally aired. Joss Whedon just happened to be the genius behind all of them. Check it out...

March 10, 1997 - Buffy the Vampire Slayer premieres. "Welcome to the Hellmouth", indeed. I didn't start watching Buffy until it ran in syndication on the FX network. Sometime late in 2003, I believe. In one way I'm glad that happened because I was able to watch the entire series in a couple of months. But I still feel like I missed out on watching it as it happened. The anticipation, the not knowing. Yet it still became my favorite television show of all time.

October 5, 1999 - Angel premieres. I only began to watch it after I fell in love with Buffy. And I didn't like it as much as Buffy. At first. I just recently finished watching the entire series again* and it is absolutely fantastic. Angel's character development is one of the most amazing things I have ever seen on TV. It's still in second place when it comes to Joss Whedon's creations...but it's sneaking up on Buffy.

September 20, 2002 - Firefly premieres. I still hadn't seen Buffy and FOX fucked this one up from the get go. Bad promotion, timeslots and they re-arranged the airings of the episodes for some reason. It seemed like they just didn't want it to succeed. But while it only lasted 1 season and 14 episodes, it may be the finest work that Whedon has done thus far. Great characters, plots and settings. Just brilliant. All with Whedon's trademarked humor and pathos. The subsequent feature film was even more fun...and devastating.

That leads us to this: 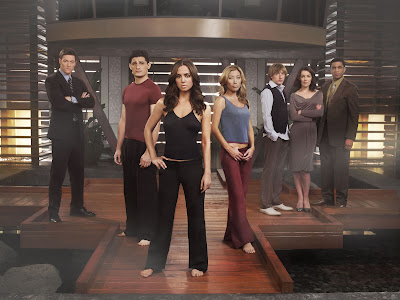 February 13, 2009 - Dollhouse premieres on FOX at 9PM EST. Yeah, it's on a shitty network on a shitty night in a shitty time slot. One that is probably gonna change two or three times this spring. Because you really can't expect a show to succeed on a Friday night at 9PM now, can you? I don't really know that much about it, and I only recognize a couple of the folks starring in it. Doesn't matter. I'm not gonna be left behind again. It's already programmed into the DVR and I'm gonna do everything in my power to make sure that it does succeed.

Like writing a blog post about it so that a handful of like-minded folks are aware that something magical might be happening again. The rest of it is up to you.

Are you gonna watch?

*OK...a few quick observations about Angel from just having watched it again:

So let me get this straight... Firefly, Buffy and THEN Angel? Earl, please. Crack is BAD for you. It's CLEARLY altering your judgment and causing you to make outlandish assertions that no person in their right mind would ever dare declare publicly.

But I did like evil Angel (I believe those of us who are NOT on crack refer to him as Angelus) waaay better than do-gooder Angel. Hot and evil.

I am definitely watching Dollhouse. Faith was one of my favorite characters from Buffy and I also loved Eliza in Tru Calling.

About Angel...I am with you on silly Angel or Angelus. I like them better than boring Angel from Buffy. Cordelia needed to stay put and be bad ass and stuff. Also? I really liked Ilyria more than I liked Fred, other than the fact that it fucked with Wesley so much.

Faiqa - I did say Angel was catching up to Buffy. Didn't I?

Hilly - I never saw Tru Calling, but it's on my NetFlix queue.

There is a great interview w/ Joss Whedon (aka The most awesome man ever) on Television without Pity.

I watched BTVS and Angel from day one and my sister brother and I called each other during each episode if there was a great line or scene.

Sweet jaysus, Earl. Has no one ever told you that the television is the work of the divil himself?

I've never even heard of theses people of which you speak.

I take it its pornography?

Firefly is definitely his best work to date. It's clear how much he'd matured as a writer by then. Buffy is next - I rewatched the whole series back about two years ago and there are a few seasons that are damn near perfect. Angel was amazing, too, but the lack of Xander and Willow makes me prefer BTVS. But any episode written by Ben Edlund, like "Smile Time", was always excellent.

I'm not sure what to think about this newest show. I've read about it a little, and I don't think that Eliza Dushku is as amazing as a lot of other people do. I also know that Fox has had a heavy hand with this show and made Joss make changes, so I'm just hoping that his voice still stands out among the fucking idiots at Fox.

I am definitely 100% watching Dollhouse!

I've been looking forward to it for a while now!!!

Here is quickly what its about:
taken from televisionary

Joss Whedon's latest television series, Dollhouse, seeks to explore the shifting nature of identity--how we perceive ourselves and how others do--through a complex story involving a clandestine organization called the Dollhouse, which wipes the personalities of volunteers (or so we're told) and imprints them with various personas specifically selected for an array of missions or "engagements." Clients with money to burn can pay these Actives (or dolls) to engage in a variety of tasks and everything, from the criminal to the sexual, is on offer at a price.

The service is expensive, confidential, and highly exclusive (or so we're told). It's also highly illegal. Which is why the the bosses at the Dollhouse--embodied by the icy Adele DeWitt (Olivia Williams) have a particular interest in one of their Actives, Echo (Eliza Dushku), who is allegedly the best of the best (or so we're told). Once an Active completes an engagement, they're programmed to immediately return to the Dollhouse, a cross between a luxury spa, military barracks, and Wolfram & Hart, where their memories are wiped and they are returned to a fugue state.

Rachel - Heya! That's pretty sweet that you are an Alpha fan.

Michelle - I just skimmed that. I want to go into it with an open mind.

I'll be tuning in... I was onboard with all the other shows, and wouldn't miss it!

I'm going to watch Doll House. If I am home in time from my fabulous, jam packed social life.
Or I'll just DVR it for later.

You are right, shitty night and time slot. Friday night at 9pm is cocktail hour.

Terrible time slot but the Office is getting old.

im gonna give dollhouse a shot, but i think its doomed.

at least fox has supposedly promised joss that they will not pull it quickly if the ratings stink. they said they specificially are putting it on friday nights so that there isnt much pressure on it to do well out of the gate

I'm totally checking this out... and the DVR is ready.

I think the Terminator lead in will help this show get seen... or maybe vice versa.

Candy - or hour 4 of Happy Hour. Know what I mean?

Zibbs - it's on Friday night, not tonight.

Slyde - and everyone records new shows anyway so it shouldn't matter.

Jenn - Roadhouse rules! And I still say Wade Garrett was tougher than Dalton.

Dawg - Friday night is all of a sudden must-see-TV. I'm psyched for the return of Sarah Connor.

Based on the limited info, it seems to be a cross between "Stepford Wives" and "Angel", with a lot of steamy sexual expolitation thrown in. Bound to be a ratings winner. However, I would rather spend my time doing some desert hiking and developing film in my darkroom.

Dude, I've never seen ANY of those, and will probably miss Dollhouse as well. As far as "The Big Three" network channels, I really only watch NBC. I will turn to CBS for my Letterman fix though, because he absolutely fucking rocks.

Bruce - Looks like a ratings winner, eh? Not if it stays in that time slot. And Whedon creations have never been world conquerors ratings-wise.

Heff - I watch about 4 or 5 shows a week. Seems like they are mostly on CBS. I love Letterman, but I rarely watch any more.

Buffy is not suitable viewing for middle aged men.

The reason? Well it's obvious...

I had the same problem with Star Trek. I never could get into the show until it was over. Which reminds me, it is about time to check out Enterprise.

WR - Welcome back! And I disagree. I believe it is perfectly acceptable viewing for middle aged men.

Ookami - The only ST show, besides the original, was The Next Generation. I've seen a few episodes of some of the others, but they never took. Now, let's talk about the new feature film by JJ Abrams...

Good to know. Thanks!

I'm probably going to watch it because of Sissy. She was the bomb in Jay and Silent Bob Strike Back.

Yes, we are going to watch.

Faiqa's photo looks like me from far away. We're twins!

Dollhouse looks interesting, have to see how it is.

We've been into Fringe and Lie to Me lately.

Poppy - yeah...she does kinda look like you in that pic.

Mik - I gave up on Fringe after a month. Shame.

I just watched Dollhouse tonight! It's looking quite interesting at the moment. I'm sad about Heroes because I really liked it before but now it seems to be sucking big @$$.

I think Joss Whedon is a very talented guy. But I never got into most of his shows, except for one: Firefly. Brilliant show.

I've not seen Dollhouse yet, but will go check it out this weekend. I do like Eliza Dushku a lot, so I'm expecting at least some good things from this new show. But Friday night is the instant death knell for any TV show. It's rare that a show makes it on Friday night. But I guess we'll see what happens.