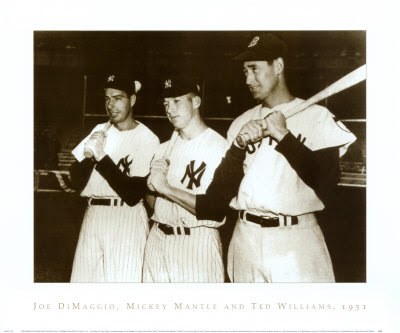 Despite yesterday's news regarding A-Whatever, I've been pretty excited this Winter for the upcoming baseball season. So much so that I'm thinking long and hard about running a Fantasy Baseball League for the first time since 2002.

A friend and I started our own fantasy league back before the ease of the Internet and CBS Sportsline. Way back in 1990 or 1991, I believe. We made up our own rules and our own scoring system, based on existing fantasy leagues. We didn't do Rotisserie rules and this new league I'm thinking about forming won't be Roto either. It will be fantasy point based. With lineups and everyting. We wanted to make it resemble the actual baseball season as much as possible. And Roto doesn't really allow that. Like a team would really traded Albert Pujols for Jose Reyes after the All-Star break just becuase they needed SB? Seriously.

Anyway, I want to gauge the interest of the bloggy world about joining the league. I would set up a new blog just for the league and it would be open to anyone who reads this blog or friends of those who do.

It's not going to be a simple "draft your team and then sit there" league. It will require weekly lineups, roster maintenance, active trading, waiver wire transactions and free agent signings. I also would prefer to do an Auction rather than a Draft, if I can find the online service that supports it. Auctions are fun!

So how about it?

Email me at babyburke at aol dot com if you are seriously interested in joining. Or you can just leave a comment. But what fun is that?

Oh, and in the latest on boobs...Yowza!

eh...Baseball isn't really my thing. But if you decide to start a Fantasy Football League, I am SO IN!

i would, but i haven't the slightest clue about baseball
and i don't ever intend to

As someone who dislikes all sports, baseball is up at the top as one of the worst offenders for me.

Ok-1. I feel for you about learning that Alex Rodriquez post. My heart goes out to you. This is no good, this use of steriods, sucks the magic right out of things.

2. YOUR new kitties are so cute. So cute they snuggle together, so lovey dovey. Yeah kitties!!

3. If I had any idea about baseball or had any free time to learn I would so be in on the fbl action. I can be a fantasy baseball league cheerleader though . . oh wait . . .

4. And the boobins'-the yowsa boobins' I disagree with the display there. I mean, if you are gigantic then well, display them properly. No need to hoist them up. Looks trashy that way.

5. I haven't played the videos from sleater kinney althougth i want to. bringing back lots of memories and such there earl. :)

Well, ok, all caught up on the stuff I wanted to say.

I played in a fantasy baseball league a couple of years ago when the guy I shared an office with ran one. I got smoked pretty badly and I never would agree to trades because I didn't ever like what was getting offered. I also didn't know enough about the players to propose trades.

I don't think I would be cut out for a intense fantasy baseball league.

I want in. I decided before the last regular season game of football that I was definitely playing Fantasy Football next season and blogging about it.

Having said that-this could be a great starting point for me. I know My Guy would help me, but I must warn you-Fantasy leauge virgin here. Be gentle.

~E - just what is that character next the the E called anyway?

Avitable - yeah, knew it wasn't gonna be your bag.

My life is so busy right now I don't think this would be a great idea on my part. A quick look at my "Project Blog" sort of indicates that I won't be getting much sleep for the rest of the year as it sits....so this would sort of be salt on the wound at this point.

I'd be interested, although I'm a wee bit clueless on Baseball.

It beats that shite that your lot call football by far.

Hey i would like to join in but is it something that can be learned or your really have to know what your doing before it all starts???? If thats the case than i guess i am out before i am in!!!!

Bruce - I would win hands-down in a Fantasy Boobs league. Or hands-on, I should say. ;)

JB - American Football is an aquired taste. But I love rugby. The 6 Nations is going on right now. What happened to yer Scottish team? The Irish squad looked good against those nancy-boys from France. Ha!

Michelle- I'm looking for folks who are really into baseball and know what they are doing.

Earl, when I was younger,I played a couple of times for a local American footie side here in Glasgow. It was a lot of fun, but it never really took off enough to give it a fair trial over here.

Baseball, and particuarly watching a real American baseball game is on my list of things to do before I die. I'd like to go see the Mets.

Jimmy - now that the Mets have torn down the old dump they used to play in, I might be up for giving them a visit. But I'm a Yankee fan at heart.