This story is a few years old, but I'm not going to let it phase faze me. When you want to have a blog post every day of the week (excluding weekends) sometimes you have to go the the well. And this particular well is old news. But interesting news, at least to an old Browncoat like myself.

Back in 2007, NASA astronaut Steven Swanson took along some DVDs on his trip on the Space Shuttle Atlantis. He was headed to the International Space Station, and (hard as it is for me to believe) those guys have a little bit of downtime. So he took the boxed set of the Firefly TV series and the follow-up film Serenity with him. Those bad boys are still circling the globe in the ISS Movie Library because he left them behind for others to enjoy.

So Serenity is still flying.  In low Earth orbit somewhere above our heads.  She's a good boat.


How cool is that? 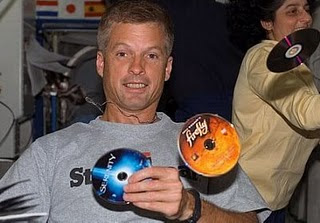 "There is no news. There is only the truth of the signal. What I see. And, there's the puppet theater the Parliament jesters foist on the somnambulant public." - Mr. Universe

Fascinating. I had no idea. I was visiting Jason's Show tonight and clicked over to Avaitable and then I saw your comment and I came to say hi : )

Speaking of the signal, have you seen Pontypool? Bloody brilliant movie, I can see it might be right up your street.

badger - It's still not available on DVD here in the States, but I have it flagged on Netflix for when it becomes available.

bullshit.. thats not even blu-ray!

i have it flagged as well. i am dieing to see it after holly's review.

Holly - I know you loved it.

Sybil - Did you just call me a nerdling? Yeah, that's about right.

That is way cool. I loved Firefly and Serenity. Such a shame FF only got one season.