I need a new favorite shirt

I don't know if this is something that is only true for guys, but I've always had a favorite shirt at just about every point in my life. A piece of clothing that immediately is worn after it is washed for just about every circumstance. Something that is both comfortable and maybe a bit stylish. That second one isn't a deal-breaker, by the way. I had a long-sleeve t-shirt that fit just right back in college that was faded, ripped and stained. I had no particular design that I remember, and I bought it in a thrift shop for about two bucks. But I wore that mother-fucker out!

For the last 5 years or so of the 1990's, I had another favorite shirt that continues to taunt me to this very day. I even wrote about it once before. It was a blue plaid, very lightweight, button-down cotton flannel shirt from Eddie Bauer. I bought it from a clearance rack too. And the reason why it continues to taunt me is because Treat Williams wore it in one of my favorite bad movies of all-time, Deep Rising. A true guilty pleasure flick.  Here it is:

Every time I see that film or think of it, I get a little sad. That was a helluva shirt. Because it was lightweight, I could wear it all year round. In fact, I probably wore it more often in the summer than I did in the winter. Roll up the sleeves, open a button or three and it was extremely comfy for a night out. Or even a day at the beach, oddly enough. It was a great shirt. And believe me, I've spent countless hours searching for something similar, but nothing has come close. 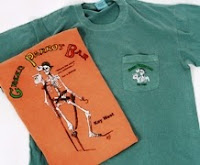 Then I found a great comfortable t-shirt at The Green Parrot Bar in Key West sometime around 2000. Great skeleton design with the logo "Where the weird are welcome...for a while". That appealed to me. Plus, The Green Parrot is my absolute favorite bar in the entire world. Great atmosphere, great bands, great jukebox, great bartenders and a great location. Right near mile marker 0 on US1. So far, I've gone through two of those t-shirts and I'm due for another. They are comfy as all hell, but they aren't very sturdy. Both of my previous versions started to fall apart after about a year of constant wear. Gia has been wearing shirt #2 around the house for a while now, and it literally looks more like a cleaning rag now than a t-shirt.  It ain't stopping her, though.  She loves that shirt.   They are still making them, so I may need to buy another couple of them in the near future.

Lately I've been fond of something called a "grandfather flannel" shirt that I bought from The Vermont Country Store. I had one of these back in college. A gift from my aunt. At the time it was way too big for me. It almost went down to my knees. It sort of looked like a shirt version of one of those long nightshirts that the grandfather wore in Willie Wonka and The Chocolate Factory.  You know the one.   I've, ahem, gained a few pounds since college, and I was hankering for another one.  So I did a quick Google search to see if anyone still makes them, and they do. It's a flannel pullover with a tab collar and three or four buttons. Very comfy, but a little too heavy to wear after May 1st. So it will probably sit dormant in the closet for the next 3 or 4 months. A favorite shirt really needs to be a year-round thing, don't you agree?

So I need a new favorite shirt. This is a thing. A real thing. It's something that bothers bothers me on an almost daily basis. And here's another problem. It's not something that you can usually search out. It's something that generally finds YOU instead of you finding IT. Like that long-sleeved t-shirt in college at a thrift shop, or that lightweight flannel on a clearance rack at Eddie Bauer, or the super comfy skeleton t-shirt found at your favorite bar. There's a lot of karma, serendipity, kismet or whatever involved.

So if you are out there, new favorite shirt, I'm waiting for you. Sniff.

My favorite shirt disintegrated years ago. Since that time I have found shirts I like more than others, but no "favorite" has emerged.

Now I just have a favorite pair of boxers.

I have favorites all the time. Right now, it's a black polo shirt that just fits perfectly. Before that, it was a white short-sleeved button up.

Dave2 - My favorite pair of boxers were Ali and Frazier. :) Thank you, I'll be here all week!

Avitable - I've never felt comfortable wearing black, which is odd because I've heard it's slimming and I'm a big fella. But with my combination of pale skin and light grey hair, I would be afraid someone would think I was a vampire and stake me. And I'm not a huge fan of short-sleeved button up shirts, although I did go through a Hawaiian shirt faze a while back. Hmmm...

Just please, no writing on the shirt. We're too old... well, I am... for wearing clothes people have to read. I mean, Jesus...

ah, i can remember all those cold nights i snuggled up to you in that shirt.....

RW - Besides the odd t-shirt with something on it, I'm past shirts with writing on them too. I'll never give up my t-shirts.

Slyde - You did love that shirt.

Aw cute stories. You're new favorite shirt will come to you.. you've put it out into the blog-a-verse, so now it will.

*your* (I really shouldn't comment so early in the morning..)

i'm with kate. now that you have told the universe what you want, you'll get it. create your own destiny and all that crap!

i always have a favorite shirt. and favorite flip flops.

Even though I constantly wear only black muscle shirts, I even have a favorite of those. Weird.

Heff - not weird. Just being a guy.

If what Becky and Kate said is true, then where the hell is Dave Grohl?! Not naked next to me, dammit!
Anyway, I have a favorite tee shirt - a Sabian cymbal tee I took from some guy in Boston. Then a guy I dated kept it when we broke up. I literally went back and had sex with him months after the break up- just to get my shirt back.
It was completely worth it. I LOVE that shirt. It's old, comfy as hell, and just now starting to get a small hole in it.
As far as flannels go, American Eagle at least USED to make the best flannels. Then L.L Bean.

Sybil - I've tried American Eagle and LL Bean. Great clothes...for winter! But their flannels are too heavy and not comfy enough to wear all-year round without a shirt underneath. Scratchy. An ex of mine, who I stayed friendly with, stole a bunch of my clothes including one of my favorite sweatshirts. I visited her a few years later after she got married and had a kid. Her husband was wearing my sweatshirt. I looked over and she immediately knew that she effed up, mouthing "sorry" to me. To make matters worse, he took off the sweatshirt and he was wearing one of my t-shirts!!! I never wanted her back, but I would have loved those clothes back.

Of course now that you've thrown it out there, it wont come to you.

It's just how it goes, but when you aren't looking it will happen.

I agree no writing. I had a green sweater like that. Cardigen..wore it till all the buttons fell Off and I used safety pins to hold it up. Holes began to.grow and I had to let it to go. Good luck finding a new shirt.-

Candy - a vote the other way for mentioning it here. Gotcha.

Holly - I don't know what is worse. Losing a favorite shirt in its prime, or having to put it down like a lame horse.

I think all men have a favorite shirt, it is a guy thing. But I don't really chose mine, they sort of choose me. Comfort has a lot to do with it.

However, last weekend, I came across a new favorite shirt while in Goodwill. It is a brand new black t-shirt for $1.99. It reads "Sarcasm - - - it beats killing people". I just had to have it.....we were made for each other.

what is all this "it is a guy thing" bullshit. i am woman, see me have a favorite shirt!
heehee

Bruce - that should be the new title for you blog. ;)

Becky - I only said that "maybe" it was a guy thing. Clearly, I was wrong. Or maybe just mis-informed. Or possessed. Yeah, let's go with possessed. ;)

One of my favorite stores:

My6 husband has a shirt from there he LOVES. The Secret Wash one.

Sybil - been there, done that, have that shirt. It's a good shirt. Just not a great shirt. Sigh.