For you long-time readers of The Verdant Dude, all two of you, this is old hat. A silly little joke that I posted a long, long time ago. But I just thought of it again over the weekend and since only Slyde is gonna remember it, I figure why not post it again? Easy peasy...especially since I'm gonna be spending 6 hours or so on Sunday watching Lost crap.  So there. - Earl


The Dead Cow
Once upon a time there was a farmer who worked his land with his wife and his three adult sons. They had one cow who provided them with milk, and he loved that cow. One morning he wakes before the dawn to begin his day of chores. He goes outside to feed his beloved cow and he sees that it had died sometime during the night. The farmer is distraught. He really, really loved that cow.  So he goes into the barn, finds a length of rope and he hangs himself to end his misery.

Soon afterwards the farmer's wife awakes only to discover the dead cow and her husband swinging from the rafter's in the barn. She too finds a length of rope and hangs herself as she just couldn't bear to go on without her husband.

Next, the oldest son awakes only to find the dead cow and both his parents dead in the barn. He looks around, but he can't find any more rope. So he decides to go to the stream that runs through the farm and drown himself. Just as he is about to end his misery, he spies a beautiful nude woman lying on the rocks on the opposite side of the stream.

The oldest son decides to give it a go. Once, twice, thrice, four times he is able to satisfy the magical nymph. But he cannot complete the deal, failing upon trying for the fifth time. She refuses to bring back his parents, so he drowns himself in sorrow.

Next, the middle son awakes. Dead cow. Dead parents. Dead brother. Nude nymph. She makes the same deal with him, but this time he must have sex with her ten times in succession. Like his older brother, he fails after coming so close. He, of course, drowns himself.

Finally the youngest brother wakes up. Dead cow. Dead parents. Dead brothers. Nude nymph. Once again she makes her deal, but this time she ups the number of times to twenty.

"No problem" replies the boy.

"No problem? You mean you actually think you can do it?" she asks.

"Sure thing." he answers. "But I need to ask you one question before we start."

"Of course, what is your question?" asks the nymph.

"How do I know it's not gonna kill you like it killed the cow?" 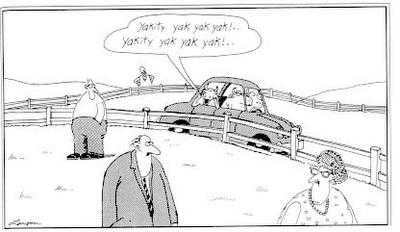 Heh. I think I've heard a variation of that one before, but it's still funny. Bestiality always is, until someone loses an eye.

Avitable - I'm just glad it had a happy ending. :)

Farco Barnes! Let's just imagine I had a witty retort to the thing and leave it at that, what do you say?

not bad. i think i remember you telling that one years ago..

Slyde - It's like one of two jokes that I know.

somehow i had never heard that one before. my life is now complete!

Becky - glad I could help.

Hmm. Figured I'D remember it, but I didn't.

Heff - I think I posted that pre-Heff.

Liz - I think you are the only other one besides Slyde was was actually reading my blog back when I first posted that joke. Imagine that.

NOT GONNA TALK ABOUT IT!!