This is it. The conclusion of our week-long journey into the cinematic night. Thank the forces of evil for that! 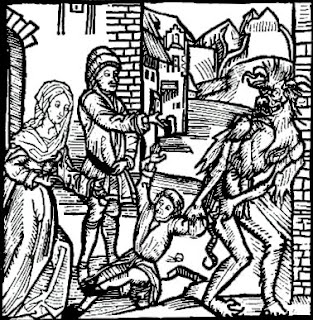 Earl's Top Five Monster/Other Films
This will be our "catch all" category of horror films. No vampires, wolfmen, ghosts, maniacs or demons here. Just everything else. You might think that this would be the hardest category to pare down to five. But I did it in like three minutes, frankly. Which means I probably missed something truly obvious. Fuck it if you can't take a joke. Oh, and in case you missed it, Slyde was nice enough to give us the best zombie films here. Thanks, Slyde!

One sidenote: I left out Jaws from this category on purpose. While it probably is the most defining scary film I have ever seen, I still just don't think it belongs in this category. Feel free to disagree.

5. Phantasm (1979) - I really don't know where the fuck to categorize this one, to tell you the truth. That's why it's here, I guess. A mausoleum, dwarves running around in dark robes, a metallic sphere with jagged blades, the Tall Man and portals to another world. I didn't know what the hell was going on the first time I saw it. I still don't. But I know that it scared the crap outta me. And Reggie the ice cream man has always been a hero of mine. All his flavors are guaranteed to satisfy!

4. Hellraiser (1987) - Let me just say for the record here, I hate these movies! All of them. I don't think they are written/made particularly well at all. Yet this first one has been known to keep me up nights. Pinhead and company are just downright creepy! I'd imagine I would like it a bit better if I were into the whole pleasure/pain thing, but since I'm not I found it to be absolutely repulsive. And scary. That's the only reason I'm including it here. Frankly, I wish I could un-make this one or just go back to a time and place before I ever heard of it. Yuck!

3. The Bride of Frankenstein (1935) - One of those rare instances in cinema where the sequel actually outshines its predecessor. James Whale did a, um, well...whale of a job with this one. Elsa Lanchester as the Bride and Ernest Thesiger as the creepy Dr. Pretorius particularly sparkle in this one. Universal Studios owned the monster movie trademark in the 30's and 40's, and many (including me) think this is the best of the bunch. "We belong dead." Yeah...you do.

2. Alien (1979) - The second film in the series was pure action. Cowboys vs. Indians if you will. The third was David Fincher's attempt at making an artsy horror/action film with a message. The fourth tried to be a lot of things and failed at most of them. But the first in the series was pure horror, my friends. Tom Skerritt hunting the creature in the darkness (while the creature hunted him), the inevitable demise of one crew member after the other and the most memorable movie monster introduction of all-time are clear hi-lights of the film. Sure, the monster is a bit disappointing when we finally see "all" of it as it is launched out of the shuttle at the end. But the pacing, lighting and heart-pounding tension of it all makes it one of the best horror films ever made.

1. The Thing (1982) - John Carpenter's remake of this film is one of my favorite films ever. Horror or otherwise. But since we are talking about horror here, I'm giving it a slight edge over Alien as the best monster movie I have ever seen. It works almost exactly the same as Alien, actually. A group of isolated people fighting off an almost unstoppable monster intent on destroying everything it encounters. There were political/economic messages a plenty in Alien, but The Thing didn't need any of that. Just a big scary monster that could look and talk exactly like your best friend. Borrowing a bit of the paranoia that made Invasion of the Body Snatchers so scary, this one took it to the next level. And Master of Horror Carpenter brought it all together with a chilling score and award-winning creature effects from Rob Bottin. This is a perfect horror film.

What did I miss this time?
Pissed in the corner by Verdant Earl at 12:01 AM

Labels: No one can hear you scream

Couple of things... First, did you know that I know someone who owns one of the actual cubes from Hellraiser? I think they used three in filming, and one of them lives right here in Ludlow. And yes, it's the real deal - the owners know/knew Clive Barker.

How cool is that?

In other news, where the fuck are Lake Placid and Tremors?? They'd be right up there on my list - but credit to you for Phantasm, a truly brilliant piece of low-budget filmmaking. I'm hoping to buy the box set next month when I get paid, they're all such mental fun.

The Thing is a great call at number one. Such a wonderful film.

I agree with Jaws. Scary but not a horror film.

see, this would have been by far the toughest list for me to make. i honestly dont know WHAT i'd put on my top 5.

the thing and alien could definitly go on my list. Maybe silence of the lambs?

This does seem like a difficult category. We agree on a couple of them, but my list would probably be the following:

1. Slither
2. Descent
3. Invasion of the Body Snatchers (The Donald Sutherland one, although I do love the Gabrielle Anwar one)
4. Cloverfield
5. Alien

badger - you know I love Lake Placid, but c'mon...as a horror flick? No way! Same thing with Tremors.

Heff - that's a tough one to watch.

Avitable - I liked the Descent a lot, and Cloverfield is a great choice.

I have a whole new category for my Netflix thanks to you b.e.!!!

Have a great weekend!!

Just thought of another one that gets overlooked a lot.

This was so fun. Plus, you saved me some time for an October 31st post. I'm just going to link to you. ;)

I never understood the appeal of The Thing.

I know what you mean about "Jaws" but it's difficult to put it in any category. It's probably more "suspense" than "horror" but that usually gets thrown in with "thriller."

"Thriller" usually means something else to most people -- heee, heee ... shhhhumon (sorry) -- so that usually leaves "Jaws" out.

Avitable - great flick! Not so sure it belongs solely as a horror flick because it crosses over so many genres (sci-fi, action, etc...), but I could see it up on this list easily. Nice job!

Faiqa - link away! I thought Candyman was very creepy as well.

Poppy - Alien attacks group of people in isolated setting. See? Pretty much the same plot as Alien and you liked that. To each her own, I guess. :)

ajooja - I see Jaws as an almost impossible to classify film. It's just a classic. How about that? A classic film. I like it.

Female with a big gun, and much scarier monster.

The scarier monster is a matter of opinion. Imagine if Ripley turned around and her beloved cat Jonesy turned out to be one of them! But acid for blog does rock. Half a dozen of one, six of the other.

It's possible that I will be laughed at for this one. But when I was younger, so much younger than today, I stayed over at a friend's house. His mom thought that it was a good idea to show us Cujo. In order to get to their recreation room, you had to go through a darkened portion of their basement, the kind with the cold cement floor and mildew smell. Anyhooters, I was so paralyzed with the fear and the prospect of having to walk back through that tiny dungeon alone, that when the pee-pee express pulled into the station, I refused to buy a ticket. What I'm trying to say is that I pissed myself. To this day, my stomach ties into knots and my heart goes into my mouth when I see or am around St. Bernards.

WLC - Do you get the same fear when you see a little Westie? Because I hear they can be vicious! ;)

I don't. But I wonder if that is a subconscious reason why a man ends up with a dog that weighs 12 pounds. Things that make you go Harumph?

Freaks is one of my favorite flicks ever. As far as the other genre goes. The Serpent and The Rainbow is a pretty decent voodoo flick.

WLC - I think you are on to something.

Evyl - That was a good flick! Nicely done.