Note: Most of the information gathered in these regional beer profiles has been gleaned from the the wonderful users over at BeerAdvocate. Their reviews are a must for any serious brew-hound. Also, I decided to exclude brewpubs from these profiles and just stick with actual craft breweries. Generally a brewpub makes beer that is only sold in it's own establishment. I wanted to stay with breweries whose product you could actually find at your local store/distributor/bar. Hopefully. And I'm only going to highlight 2 or 3 per region. Also, feel free to nit-pick. I dig beer and all, but I'm certainly not the absolute last word on it. - Earl
Finally winding this bad boy down.  Phew!

Heff - "I'm from Alabama.  Beer me, Earl!"
Heff requested a Birmingham-specific profile, but since there are only two breweries in the entire state, I thought I would talk about both of them.  Quick note first: Heff wanted to know about a Birmingham area beer called Vulcan that he used to drink a ways back.   Unfortunately for Heff, Vulcan Breweries/Little Star Brewery in Birmingham closed it's doors 8 or 9 years ago.  Sorry, dude.

Good People Brewing Company, however, is now brewing in Birmingham and they get some pretty good reviews on BeerAdvocate.  There are only a handful of reviews so far, but still.  They look like a small operation right now.  In fact, they are looking for guest brewers to give 'em a hand and they are offering a free t-shirt for the effort.  Hmmm.  Anyway, right now they are only brewing ales, but they hope to brew a lager or three in the near future.  Besides the standard pale ales, IPAs, brown ales and stouts they also make a Roggenbier which sounds interesting.  A roggenbier is a traditional German-style rye beer, and I love ryes.  All in all with knowing not a great deal about this brewery, I would still recommend it.  If only because they seem to earnestly care about craft beer culture and producing fine brews.

Olde Towne Brewing Co. in Huntsville is the other brewery in Alabama.  It's been around since 2004 when brewer Don Alan Hankins started selling his wares at Humphrey's Bar & Grill in Huntsville.  The first microbrewery there since the repeal of Prohibition.  The company has had a tough time of it in the past few years.  Lost the entire brewery to a fire in 2007 before re-opening a year later.  They make a nice variety of brews including Olde Towne Bock, Olde Towne Hefeweizen, Olde Towne Amber Ale and Olde Town Pale Ale.  I don't know if they have resumed bottling yet, but now that Alabama has joined the rest of the country in passing laws that allow breweries to make higher alcohol brews they should be notching their production up a bit.  So look for that coming from them soon.

Paticus - "I'm from Tallahassee, Florida.  Beer me, Earl!"
As Downtown Guy pointed out in the comments section, good luck with that!  Craft beer in that part of the state is as dead as disco.  So I considered my options and decided that writing about any other specific region in Florida doesn't help Paticus or Hank at all.  So I'm going to pick a couple of breweries that I hope are state-wide that I find interesting.  There are only 11 breweries in the state.  Maybe, just maybe they will be available in the Tallahassee area.  If not, there is always Pabst Blue Ribbon (do yourself a favor and watch that clip). 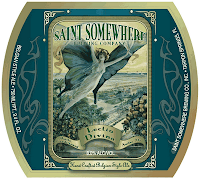 Saint Somewhere Brewing Company out of Tarpon Springs is a pretty interesting operation.  I wonder if they took their name from Jimmy Buffett's song "Boat Drinks" ("I gotta fly to Saint Somewhere!")?  They focus on Belgian-style ales only and I only see four beers that they have made in small batches thus far.  I think I've seen the bottles up here in NY, so I would assume that they are available all over Florida.  But you know what happens when one assumes.  The Lectio Divina is a highly rated Belgian Strong Ale with an ABV of 8.0%.  Nice.  Their Saison Athene is their take on the traditional Belgian Farmhouse Ale.  Still pretty strong for a farmhouse.  I love Belgian beers and Belgian-style beers.  So I would definitely give these guys a chance even though they probably are a bit more expensive than your standard beers.

Cigar City Brewing out of Tampa is slowly but surely making their way northward.  It's been spotted as far north and east as Jacksonville, so I assume they will be making their way to Tallahassee soon if they aren't already there.  Very, very prolific for a small, local micro-brewery.  Lots of British-style beers like Big Sound Scotch Ale (a wee heavy) and Chaveta India Dark Mild, an English-style dark mild ale.  Lots of American styles too.  Basically, a lot of styles.  31 in all.  That's a lot for a smaller-sized brewery.  And all of them get some fairly good reviews.  I'd give 'em a try if I could find 'em.

Limpy - "I'm from Connecticut.  Beer me, Earl!"
And he's right.  That statement does sound kinda gay.  I had no idea the Limpy lived so close by.  I can literally see Connecticut from my back yard as it is right across the LI Sound.  Now I'm thinking of moving again.  Hey-yo! Also from the fine state of Connecticut is another blogger friend who writes Always Home and Uncool.  A blog and a statement that I can relate to, even if I don't have kids.  I have cats.  What was I talking about.  Oh yeah...Connecticut beer.  There isn't much of it, to be honest.  They really need to step up their game if they want to compete with their New England brethren on the craft beer front.  But we will do our best with what we have.

The Olde Burnside Brewing Company in East Hartford seems like a very cool brewery.  They started out as an adjunct to their ice business, actually.  They noticed that some of their customers were coming in for large quantities of their water to home-brew their own beer because their water shared many mineral properties with the clean, crisp waters of Burton-on-Kent in the UK.  So they decided to brew their own beers in the Scottish tradition to honor their ancestors.  Pretty cool.  Olde Burnside Ten Penny Ale, a Scotch Ale, is their flagship brew.  They also make a Black and Tan called Dirty Penny Ale and an American Pale Ale called Highand Fling Spring Ale, which may be a seasonal.  The beers get a varitey of ratings on BeerAdvocate, but it seems like one of those things that I would have to try myself.  And the reviewers on that site are particulary snooty at times, so one never knows, do one?

Thomas Hooker Ales & Lager out of Bloomfield IS Connecticut's beer.  Well, according to their website at least.  I have tried a few of these and they do make some fine brews.  Originally Troutbrook Brewery, they were re-marketed as Thomas Hooker Ales & Lagers in 2003.  I've tasted the Blonde Ale, the Oktoberfest and the Nor'Easter Lager from their line.  All solid offerings.  But it is their Liberator Dopplebock that really blows people away.  One of the best reviewed beers I have come across in a while.  Seems like they do well with all of their stronger alcohol brews.  Nice!  One strange offering from them is their More Than a Mouthful Watermelon Ale.  I don't normally do fruit beers, but that sounds pretty damned interesting.

I hope y'all found that as fun and interesting as I did.

Thanks Earl. I'll have to see if I can find some of those.

Oh, and as soon as I saw that PBR was a link, I said to myself..."Heineken? Fuck that shit!..." Great minds think alike.

don't mess with PBR's, they got me through college. In bama you should be reviewing race cars, crimson tide, bbq and moonshine!

2abes - I would never mess with PBR! I try to always have that on hand in the summer. Nothing like a cold PBR can.

I read a while back that Elm City (mmm) from lovely New Haven was being brought back in cans, but I can't find that our any other CT brews in our corner of the state. We stink.

Uncool - I'm pretty sure that Elm City comes out of Keene, NH. It's a brewpub, so I guess they could have opened another one in New Haven, but I don't see it on their site. Now New Hampshire...THAT'S a decent beer state! ;)

I heard Slyde went out the other night with a Dirty Penny in his pocket, found a Blonde Al on the corner and ended up with a Mouthful of.....? I didn't even know he was talking about beer.

If it's not too late to beer me - I'm from West Chester.

10 minutes from Victory Beer in Downingtown.

Heff - well, they are small breweries I believe. Do I smell a "What's on Tap?" installment in the future?

2abes -that sounds about right.

Zibbs - no fucking way. This shit took way too long. Besides, you live in craft-beer central. Between Victory, Stoudt's (Adamstown), Lion Brewery (Wilkes-Barre), Weyerbacher (Easton) and Troegs (Harrisburg) you have your hands full. Or just go to Monk's in Philly. That'll do.

I know both of those breweries, but my favorite is the Willimantic Brewery in, you guessed it, Willimantic. In a gorgeous old grantie post office, they make their own brews on site and have pretty decent food to go with it. They sell growlers, but no bottles in stores. You'll have to go there, where there's a better than ever average chance of meeting me, and a near certain chance of spotting my brother.

Come early; it can get ugly as the evening wears on us.