As I've mentioned before, Wolowitz is an interesting cat.

I figured that since I posted a pic last week of his sister and his brother from another mother (Gogo and Avery), it was time to give the odd boy his due.

He loves laundry-time.  I'm not so sure he is really interested in helping out or if he just thinks that the color of the laundry basket matches the color of his eyes.

He also loves the water fountain that we bought him.  Except he likes to come it from an odd angle.  The "up top" angle.  This leads to a slight bout of choking as the water goes down the wrong pipe, but he still does it anyway.  Notice the tongue. 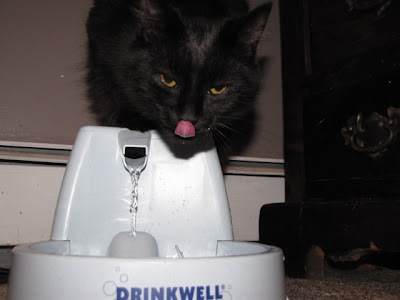 Some of his other tricks in the bag that we have yet to capture on film:
And finally, he will often just get right in your fucking face.  Because he can. 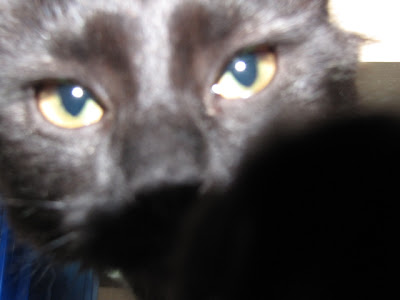 In all honesty, that last photo might be Gogo.  From far away or really close up, they can be hard to tell apart.
Deal with it. - Earl

talented cat, does dave still do the pet tricks segment. i think you could make the show

Faiqa - And he would have got away with it if it weren't for you rotten kids! ;)

2abes - except he's a cat. Cats do what they want. He would never "perform" on demand.

Again, NOT a cat fan, so I'll just back away without leaving a derogatory comment, lol.

Heff - Even non-fans of cats might be amused by Wolowitz' antics. He's a piece of work.

ohmygod, i love him! cute!!

That is one cute kitty cat.

Earlsie-I don't want to be a downer here but I just heard a story about an over-worked, tired mom who was doing laundry and she somehow put the cat in the dryer and killed it.

Just a cautious FYI- Wolowitz is way too special.

What a cutie! Here's a fun one for the little guy. Roll up some tin foil in a ball the size of a golf ball and toss it. DAYS/WEEKS/YEARS of enjoyment! Sounds like Wolo would like this cheap toy!

That is a pretty awesome cat.

Diva - he is amazing.

Candy - oh, we are super careful about laundry.

Jenn - we have too many cheap toys laying around the house to add any more.

Avitable - he is the next rung on kittie evolution.

Bruce - well, he is just one of four. And they are all pretty unique.

He's far too clever...he'll be stealing the car keys and running up credit card debt in your name if you don't watch out.

but, do you have an recommendation for an apology gift of beer to a coworker. i really screwed up and really, it was a rookie mistake and no harm to any patient, but he had to bail me out. he continues to have to deal with my screw up.

the coworker in question likes golf, is a mentor (one of the doctors I work with), has a dean martin like personality and a very un pc sense of humor. he's a good guy and I liked working with him immediately.

he was such a kind and nice guy that readily bailed me out. and doesn't give me any shit about it.

gives me shit about everything else though. including living in my parent's basement. and getting flustered easily. He's laid back and takes everything in stride.

My childhood cat, Fat Albert, could totally turn door knobs. He would jump up and frantically turn the knob from one side. I loved the hell out of that cat!
Wolfowitz is awesome.

want. send either the cat or bacon bourbon. do it. do it now.

I just made my stupidest squee noise-sound.

I can't wait until we get our orange kitty. raaaarrraarrrrrrwwwwwrarrrrr! :)

You need to post video of the cat. Seriously.

And I still love his name.

Holly - I forget where you live. I know it is the mid-west somewheres. Lemme think...how about some Arcadia Ales stuff from Wisconsin, if it is available in your area. Great beer. Email me with more details about the guy and I can give you better suggestions when I'm not exhausted.

Sybil - And Fat Albert is a great name for a cat!

Poppy - you getting a tabby? Love orange kittens.

Callie - Video is the next thing.

It's things like these that make me question how a cat actually survives in modern society.

But then again, he's so cute... just let him drink how he wants.