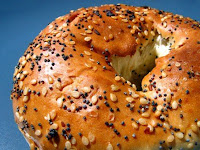 There are many things that I would miss if I ever moved from this area. But I would have to put great bagels up near the top of that list.

But there are the random shitty bagel shops that needs to be avoided. Maybe the bagels don't taste as good. Maybe the service sucks. Maybe the person who owns it is a complete asshole.

I know of such a joint. Well, I know of a few. But this is about one that I encountered yesterday. I've been there before and I always come away with the same reaction. Feh. And it always seems like it is much more expensive than your normal bagel joint.  So I try to avoid it.

Yesterday I had to go get some dry cat food at the pet store early in the morning.  I asked Gia if she wanted some coffee and a bagel and she said that she did.  So I was gonna go to the pet store in one direction and then go the bagel shop I like in the other direction.  Even though there was this bad bagel store in the same strip mall as the pet store.  That's how much I normally tried to avoid it.

Now I place this same order a lot at the bagel store I usually give my business to, and it usually anywhere from $9.00 - $10.00.  What can I say?  Bagel shops are imperfect businesses.  So I'm trying to add it up in my head and I was just gonna let it go.  Then I turned around and looked for a board with prices.  There wasn't any.  So I politely asked "Excuse me, how does that add up to $13.00?"

And he got pissed at me!  Started yelling and slobbering and gesticulating in an incoherent fashion.  I can only assume he was giving me a rundown of what each item cost, but none of it was making sense.  And I was getting mad because he was getting mad at me. And I know I was only getting ripped off by something like $3.00, but it's generally the little things that really get your goat every now and again.  I know that he was just making up whatever price he wanted.  That's why he doesn't post his prices.

So I waved him off, called his shop overpriced, called him a fucking hack (made sense at the time) and stormed out of there.  Never...EVER...to return.

And you know what?  It felt pretty good.  Maybe I just needed to let off a little steam.

On a lighter note, Gia is once again going to be a rock star tonight at this concert.  She has her own solo again this year.  Last year, she brought down the house with a version of "Bad Girls" that kicked ass.  Tonight she will be singing "Be My Baby" by the Ronettes and singing backup vocals for most of the rest of the night.  Maybe an impomptu duet or something as well.  The party goes until almost 4AM.

So if you are reading this when it posts, I will be doing the Old Folks Boogie and celebrating my woman.

If you are reading this sometime during the day on Wednesday, I will be hungover.

How weird is it that I was just thinking of Little Feet this morning? And you post a link to them tonight?

Dude - it's scary, but we're kinda on the same wavelength.

Get off. Seriously. It's my wave.

Callie - I believe I saw the wave first. Or felt it. Or something. Me need sleep too!

Oh God, my Queens born and bred wife never let's me forget that you just can't get good bagels anywhere but in NY. That and canolis. And then we start arguing about pizza and hot dogs. And "fuckin' dinahs" (diners). I am shipping her back.

What bagel establishment do we need to boycott for you, Earl?

LI does have a slew of good bagle shops. My kids have there favorite and can tell if I go anywhere else for them. F that jackass who doesn't post his prices. Unless he's providing such a high quality product that people don't care what the prices are, he's just ripping off people. Congrats to G!

That's cool about Gia - do you ever have any video of any of this?

I love a good bagel. Can't really eat them anymore, but they're sooo good!

I love that you told that guy off. He totally deserved it.

I can't think of anything funny to say but that was funny. Fucking hack. I bet you just turned that man into an even eviler bad bagel business man!

seriously, hope the gig was everything y'all wanted and more!

Wil - I think I luv her! I couldn't live without a good deli or dinah!

Poppy - you know, I don't even know the name of it. But it is on East Main Street in Huntington.

2abes - you might know this guy. He used to run the bagel shop on Rte 110 in Melville up near Chipotle. He's a douche!

Avitable - I am going to see what was shot last night and maybe send it to a few folks. I'll keep you in mind. So sad about the bagels, but it is all for the greater good. Right?

Faiqa - I dunno if calling him a hack made any sense, but it made me feel good afterward.

Kate - He's like the evil Grinch of bagel shop owners.

Savannah - it was the bomb. And no...no hangover today. Just tired. And feeling old.

Heff - I describe it as being hungover, but it really is just feeling tired. I don't get hangovers anymore. I tend to stop drinking when I feel it is getting to that point now that I am in my 40's.

I haven't been to a bagel shop in like FOREVER. So, you remind me to look one up around here. Because I LOVE THEM SO!

Best to stick with the better shops.

And yes, bagels in NYC are the best.

I'm ashamed to say that I've never eaten a bagel. It's now on my list.

That settles it, I'll have to get some bagels for lunch.

You're lucky. I can't find a great bagel around me. I'm sure that there are some in Philly but that's too far to drive for one bagel.

My favorite thing about NYC is the bagels.

Well, that and the crazy bastards who scream at people over $3.00.

Brooklyn bagels are actually the best.

The link you posted is not working dude!!

i will cut a bitch for a good bagel. the best joint in town closed years ago and my heart (tastebuds) still cry for it.

Jenn - but do you get good bagels in MN?

Jimmy - my bagel of choice is an everything with olive cream cheese. But I'm an odd duck.

Ookami - glad I could be of assistance.

Zibbs - that sux. I would have thought that PA would be close to NY or (gasp) NJ in bagel excellence.

Britt - I will take that as a compliment because I know that is how you meant it. ;)

Michelle - It was yesterday. Weird. I'll let the kids know. Thanks!