I've been promising for a while now that I would post a picture of Wolowitz in his "belly time" pose.  Basically, he will lay on his back and have one of his humans rub his belly until he falls asleep.  Then he will lay like that for hours.  Don't believe me?

Well, here it is: 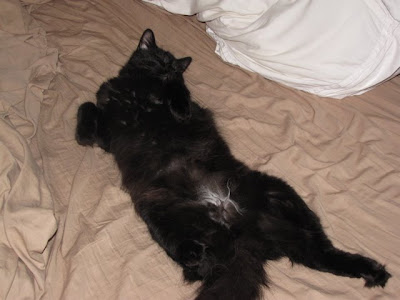 He likes to have that little patch of white fur above his penis rubbed.

I totally get that. 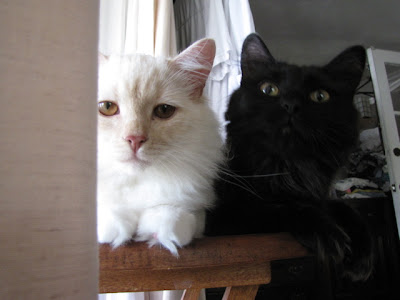 There is Avery (dressed in white) and Gogo (in black) hanging out in their favorite spot.  On a snack table overlooking the patio and the harbor.  I don't blame them...it's a good view.  Avery has a bit of a thing for Gogo, even though nothing romantic is ever gonna happen as she is fixed and his days are numbered.  He thinks that she is his and his alone.  As evidenced by the following pic. 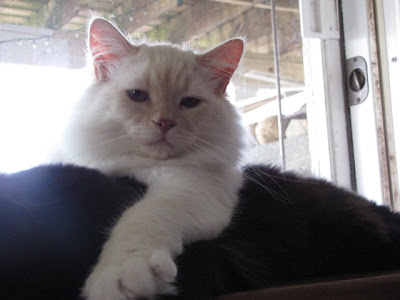 people either like cats or dogs, few like both, I prefer the dog. maybe the itchy eyes i get from cats has something to do with it.

2abes - I used to have terrible allergies to cats. Just ask Slyde about my attacks when I would go see him and his cats. But miraculously they have disappeared. Odd.

Heff - I think I'm the only person on the Internets that has never seen whatever "peanut butter jelly time" is. I keep hearing about it, but I've managed to stay away this long and I'm not gonna ruin my streak.

Cat pictures DO rule!
They are awesome. :)

i will never get sick of seeing your cats in action... CUTE!! so much, i could hurl rainbows!!

Sybil - They make us very happy!

Diva - Wolowitz is laying all over my workpapers as I type this. He is a piece of work.

"He likes to have that little patch of white fur above his penis rubbed".

He likes to have that little patch of white fur above his penis rubbed.

I ADORE the last photo.

Michelle - sure, why not?

Poppy - that's because it's ADORABLE!

Avery looks just like a cat that was in one of my books I read as a kid. The name of the book escapes me, but the cat was all white like Avery, then falls into some blue dye.

Marty - I think the name of the book was called "Peppermint" about a small white cat born in a candy store that accidentally gets dyed blue. Right?