Everything old is new again...

Round 1: They are two federal agents assigned to an under-the-radar department that investigates paranormal crimes and activity. He's an intuitive, imaginative and instinctual investigator (you don't see a lot of "i" alliteration, do you?) dealing with the tragic loss of a loved one early in his life. She's a by-the-book, pragmatic sort who has a hard time dealing with the nature of their investigations let alone the quirkiness of her partner.

Did you guess The X-Files?  Yeah, you probably did.

Round 2: Two young folks, a man and a woman, are responsible for chasing cursed antiquities all over the world before the evil that haunts these objects can kill and kill again.  They work with an older gentlemen who houses all of these artifacts in a giant vault to prevent them from infecting the world with their evil.  The male half of the duo uses humor to diffuse tense situations and she is a fiery redhead with an attitude.

Did you guess Friday the 13th: The Series?  Maybe not, but if you were a fan of this show in the late 1980's than maybe you did.

Bottom line: Both of those plot synopses (synopsi?) can also be used to describe the new SyFy* show Warehouse 13.  It's as if those first two shows had an unholy night of sin and nine months later this malformed baby popped out.  It's about two Secret Service agents who are reassigned after a job gone slightly wrong to a secret government facility called Warehouse 13 out in the middle of nowhere.  The rest of it you can figure out from watching either The X-Files or Friday the 13th: The Series.

*Quick aside...who was the lame-brain that decided to change the name of the SciFi Channel to SyFy?  That's just silly!  Are they trying to bring in new audiences who might not be inclined to watch a show if it is on a Science Fiction network?  Are they trying to save advertising space because the channel call letters now have one fewer letter? I don't get it.

I've only seen the first episode thus far, but it entertained me.  It's not original, by any means, but it is fun.  And one of the co-creators is Jane Espenson (Buffy, BSG) so I'm willing to give it a few weeks at the very least.  And besides, it's Summer.  Nothing else is on anyway.

My favorite thing about the show, and a real reason to watch (at least for me), is the steampunk designs of the techie doo-dads that are used by the dude who runs the warehouse.  Like his computer.  I want one.  Sooooo much!  Here is one that looks a bit like it: 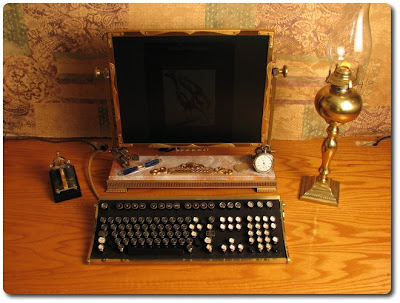 Click on those links to see the coolness.  I wish I were handy, since that dude basically walks us through his creations and encourages his readers to give 'er a go.  But I'm not, so I will just sit here pining for a setup like that.  Sigh.

UPDATE: I just watched the second episode and damn if No. 6 (Tricia Helfer) didn't make a guest appearance as an FBI agent.  I don't know about the rest of you geeks, but in watching the first season of BSG, I think she is a pretty good actress.  Not bad on the ole ocular mechanisms either.  Rowr.

Maybe because it isn't very original, but I'm kind of bored by Warehouse 13. I'm willing to give it a fair shot, but the writing needs to be a lot more creative and the plots need to be tighter if I'm going to keep watching. The old "artifact of the week" schtick is going to get really tired, really fast.

I absolutely LOVE steampunk. I want the "laptop".

If you think number 6 was good in season one, she'll knock your socks off in the later seasons. She's absolutely excellent.

i didn't know you were as big a syfy (wtf)...scifi fan as slyde.

i find it very hard to beleive that a nerd like you (comic book nerd, no less), didnt know what the steampunk genre was before today.

W13 just looked lame to me, but i like esperson... shes currently writing the Buffy Season 8 books for Joss.

Dave2 - Unfortunately, I think the old "artifact of the week" gimmick is the basis of the show. The second episode made me laugh once or twice. It's not great, but I'm enjoying it thus far.

Steph - I love the "inkwell" add-on for the laptop. Very cool.

2abes - Actually, Slyde isn't nearly as a big of a SciFi fan as I am. Well, at least reading-wise. I can't get him to read Asimov or Niven or Card.

Slyde - Yeah, steampunk totally passed me by. And you will have to remember that I probably haven't been in a comic book shop since the mid-90's.

Huh, well, i totally got the friday the 13th series question.

and this is totally inappropiate but.... well... no, wait, the connection between my daughter and the x files.... that will have to wait....

Holly - I used to love Friday the 13th: The Series. I re-watched a few episodes this past Halloween and they weren't as good as I remembered, but still...not bad.

There is a grubby little shop in Kings Cross which specialises in taking your new laptop and 'antiquating' it into something like the one in the photie.

Tacky... but interesting in a you-cannae-be-serious- type of way.

Jimmy - one of the appeals for me is the feel of the old typewriter keyboard. I learned to type on an IBM Selectric and not a computer keyboard. So I tend to make a lot of noise when I type because I am hitting the keys so hard. Can't help it.

I noticed the the whole SyFy thing last week. I think they did that because the idiots are taking over and apparently, they spell it Syens Fycshun.

As for us geniuses? We're a dying breed, my friend.

Faiqa - I did a little research and found out that they weren't able to copyright the "Sci Fi" brand because it is used throughout our culture. Hence SyFy. But yeah...you and me? Geniuses! ;)

Those steampunk devices were all over the place in the tech blogs. Keyboards being the most popular.

There is a whole sub-culture around this Steam-Punked thing that I have always found to be interesting, if not a bit bizarre. I browse Geekologie.com once in a while and they usally have basic everyday item that have been steam-punked. iPods, video game consoles and the like. Don't know when it all started.

As for the show, I will pass. I think networks are getting desperate. I am waiting for the end of the Bachelorette and the start of "More To Love" (Bachelorette for plus sizes), and maybe a little Dating In the Dark. I just love watching real life desperate people going to extreme lengths to humilate themselves on televions......which is why I sort of hope Slyde get on Survivor......