Burial Ground: The Nights of Terror

Once again it is Final Girl Film Club time!  This time it is Italian zombies and plenty of them in Andrea Bianchi's Burial Ground: The Nights of Terror. 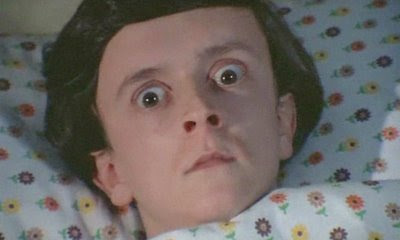 He's so cute! Just like a little masculine Rachel Dratch!
So there is this dude who could give Rasputin a run for his money in a best beard contest who goes mucking about in an Italian archeological dig site (in retrospect, probably not a good idea) and gets accosted by Italian zombies.  You could tell they were Italian by their love of red wine/blood and their attitude.  You can also probably guess the outcome, but since this review is filled with spoilers I will help you out.  Ciao, Rasputin!

This was the remarkable/unremarkable first few minutes of the film.  We have no idea what he found or why it triggered the Italian zombie attack.  All I know is that it was followed by a very lighthearted mid-60's jazz theme song.  Only out of place because the film was made in 1981.

The light jazz ends and the action quickly shifts to three couples, including a boy wearing some very bright red pants, arriving at their summer home which is conveniently situated near the dig site.  The boy, who looks a lot lot Rachel Dratch from SNL fame, is a bit bugged out by the late-night visit from his mother (see the screen-cap above).  But we are going to have to get into that a little later on.  And I'm going to get tired of typing "creepy Rachel Dratch kid" so let's call him CRDK from now on.  Okay? Okay.  Hooray, acronyms!

"You look just like a little whore.  But I like that in a girl."  The gratuitous nudity showed up at that the nine and a half minute mark on the DVD.  Well done!  This would be couple #2 who are getting it on, but "something" wakes up CRDK.  So he sleepwalks his way into the bedroom where the gratuitous nudity is taking place, but, due to some nifty editing, it is now his parents who are making of the love.  Mom barely covers herself up as the kid lets out a baleful "Mama!"

You can tell this kid's got issues.  I wonder where that is gonna lead?

After an uncomfortable morning breakfast, Couple #3 decide to get it on in the gardens of the villa only to be interrupted pre-coitus by the shambling undead.  There is a slow-moving Italian zombie in loose clothing behind every shrub, or so it appears.

"Mother, this cloth...smells of death!"  Cut to an artist studio or museum or something like that attached to the villa.  Mama, Papa and CRDK are practicing shooting things with Papa's pistol when they are rudely interrupted by Italian zombies.  Papa shoots a bunch of ineffective holes in the torsos of the zombies before eventually succumbing to their attack.  Apparently he forgot to watch any of George Romero's zombie films before weekending at the villa.  He would have known to aim for the head.  It, of course, would be his undoing.  Ciao, Papa!

Back to couple #2, who are making out in the gardens by a fountain.  These Italians sure are horny.  More Italian zombies show up. Maybe it is sex they are attracted to.  Like serial killers in the slasher movies of the early 80's.  And I'm beginning to notice that these Italian zombies are really into earth tones.  A little sky blue or bright yellow couldn't hurt, could it?  Couple #2 run from the slow-moving killers and we cut back to couple #3 who have been slowed down by an iron wolf trap in the front yard.  A wolf trap.  In the front yard.  Amazing plot twist.

But couple #2 saves them with the aid of some small boulders.  They bash the Italian zombie's brains in.  They just bash 'em right the fuck in!  Ciao, Italian zombies!

The mother and CRDK are still in a spot of jam in the house, though.  Amid what appears to be some very nice Etruscan artifacts, they discover another way of stopping these zombies.  Fire. This requires dousing them in paint and then running up to them with a lighter or lit match.  Sounds kind of dangerous to me.  Especially since they decide not to, ya know, run away from the burning Italian zombies.  They just cower in the corner until the flammable undead collapses just out of reach of them.  I'm not so sure this is really the way to fight Italian zombies, but it seemed to work for them.  Ciao, Italian zombies!

We soon discover that these aren't your garden-variety brainless Italian zombies.  No sir.  They manage to dispatch the maid by throwing some kind of spike into her hand and lopping her head off with a scythe.  So they use tools.  Like our early pre-historic simian ancestors.  I'm starting to develop quite a bit of respect for these Italian zombies.  Ciao, maid!

The mustachioed male half of couple #2, who in fact may be a younger version of the Most Interesting Man in the World, discovers the headless body of the maid hanging out of a window.  He promptly lifts up her skirt and ravishes her right then and there.  Okay...not really.  But it would almost have fit in with the brainy Italian zombies and the wolf trap in the front yard.  He does check out her ass like he is thinking about it, though.  So I'm not totally blowing smoke up yer coolie.  To assuage his guilt he throws her headless body to the swanky flesh-eaters waiting below.  What a dick!

The remaining survivors now must defend the villa against the tool-weilding, earth-tone wearing, brainy Italian zombies.  Some make it, some don't.  That's how these flicks work.  I especially enjoyed the scene when the mother of CRDK defends him by whacking away at the fiends with a sword that happened to be lying around.  Lots of weapons just lying around in this villa.

CRDK is so relieved to be alive that he starts macking on his own mother!

He starts kissing her and feeling her up and generally trying to get up her in her business!  I just knew this kid had Mommy issues.  I just didn't realize that it was that kind of Mommy issues.  Wow.  Just wow.  She rebuffs his advances, of course.  Even if he weren't her son, he fucking looks like Rachel Dratch!  So he runs into the arms of the next woman he can find.  The next Italian zombie woman.  Should have let him get his freak on, Mom.  Ciao, CRDK!

You wanna know the creepiest thing about CRDK?  He wasn't really a kid.  He was played by a 26-year old creepy Italian midget named Peter Bark.  Now you don't have to feel so bad if you kinda were into those creepy Italian incest scenes.  Sickos!

All in all, I would have to say that this was the finest incest-laden, awful special effects, bad makeup, incomprehensible Italian zombie movie I have ever seen.

Rachel Dratch was EXACTLY where I was gonna go with that !

I feel like my life will have a hole in it if I never see this film.

p.s. you used to have that exact same fucking haircut...

Limpy - it's a hole that can easily be filled with your Netflix subscription.

Slyde - Never in my life have I had a pageboy cut. Douche.

Cans? I take it that 'cans' is slang for jubblies?

Jimmy - I take it that jubblies are slang for cans? Then yes! ;)

Holy cow...he DOES look like Rachel. That's scary enough for me. And Marilyn Manson for that matter.

Um, does this crazy stuff ALWAYS happen around here???

Jenn - I don't see the Marilyn resemblance, but he is creepy.

I thought I was the only one that gave Rachel credit for huge cans. I AM NOT ALONE.....

Heff - one of the funniest bits she did on SNL was as a 12 year-old girl returning to summer camp after she developed in the interim. She was just running around, bouncing and the camp counselors couldn't even look at her. Her boobs were massive!