OK, I promised a recap and some pictures from the concert the other night. So here goes. 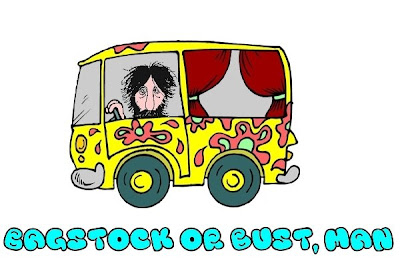 First, the link I provided yesterday to the home page for The Paper Bag wasn't working. Now it is.  The Paper Bag, by the way, is both the name of the show and the band. A group of upwards of 70 local musicians who meet once a year to party their balls off. Gia, recently, is one of them. She sings with a group of women called the Cheese Calzones, who appropriately bring the cheese. Crazy outfits, crazy hair and crazy antics are their forte. The past two years, Gia has had her own solo with the rest of the Calzones backing her up.

This year's Bag was a tribute to Woodstock (40 years) and Motown (50 years). Peace, love, music and all that dope.  Gia and the Calzones were given "Be My Baby" by the Ronettes as their song this year.  And she had a little surprise for the event. 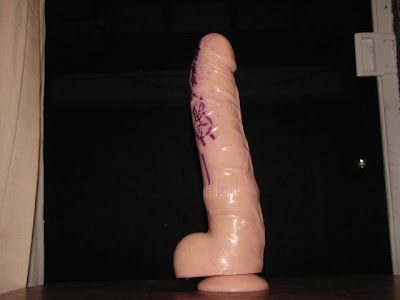 That mother-fucker had to be a foot and half long and twenty pounds if it was an ounce.  Luckily, I'm packing my own heat so I wasn't too jealous of it's size.

Here are the cats playing with it to give it's sheer massiveness the proper perspective.  I'll explain the drawing on it in a bit. 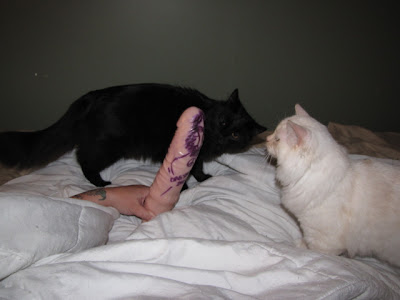 They looked intrigued, don't they?

I was a bit apprehensive.  The show was packed and I had to work my way through the crowd carrying this massive concealed weapon just to get to the front of the stage.  I nudged a few people out of the way with it.  Had to.  And at just the right time...I whipped it out!  From under a shirt I was carrying, of course.  The crowd loved it!  The guy next to me watched the events with his hands over his eyes.  The woman next to me watched the events with lust in her eyes.  You know the drill.

As for the drawing, Gia drew the cartoon face of the organizer of the show onto it as a tribute to the man.  If you click on that Paper Bag link above you will see the caricature that I am talking about.  It got a little smudgy (from the show, people!), but I think it came out pretty cool. 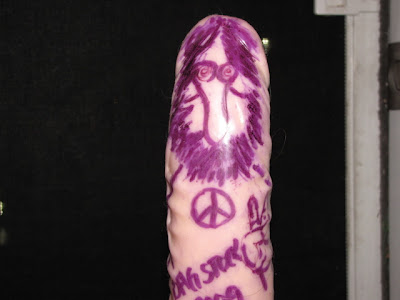 So yeah, I handed my woman a giant cock that she sang a love song to in front of about 1,500 people (just guessing...it was jam-packed!).

that? was fucking awesome!

Becky - I knew you would love it.

now that's a great relationship, sugar! between you and gia, i mean! ;~D xoxoxo

Hahaha I love it!

I'm never going to be able to hear that song again without getting that visual.

Would love to hear her singing.

Zibbs - she has a great voice.


That is pretty hilarious.