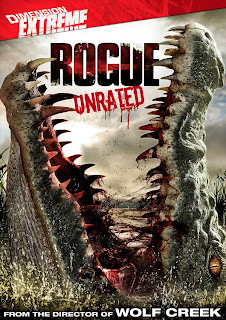 Breaking News: I watched Rogue the other night.

It was exactly the kind of film that I almost always enjoy. A bunch of tourists in the Australian outback are terrorized by a big salt-water crocodile while they are on a tour boat in a tidal river.

They wind up stuck on a small island that only is accessible at low tide. Wackiness ensues.

It's a simple as hell formula that goes back decades, if not centuries. Bunch of people, remote location, big monster. Who will survive? This one has some decent scenery, solid performances, a not-so ridiculous looking monster and it rarely stoops to stereotypes even though it easily could have.

The film was a box-office flop.  In fact, I never even heard about it until a few weeks ago.  It's a shame because it was solid work from the director of Wolf Creek, which was a pretty decent slasher flick.   And it had an engaging cast including Michael Vartan, Radha Mitchell and Sam Worthington.  The last guy is now a bit more famous as he stars in the lastest Terminator film.

Anyway, it ain't gonna win any Academy Awards.  It's not that kind of film.  But sometimes a simple tale like this is all I need and all I want.  It was a good film and that was enough for me.

Got me thinking about films with crocodiles and alligators as the big bads, and this one might actually be the best one I've seen. Lake Placid was pretty good because it never took itself too seriously. Yeoman's work from the cast on that one as well. Alligator from 1980 is highly underrated.  It was co-written by John Sayles and it had some great work by Robert Forster.  It also succeeded by making fun of itself and the genre.  Hell, it had a sewage worker named Norton.  I dig that.

Primeval was a crocodile film that didn't work as well for me, yet I still kinda enjoyed it.  It was based on a true story (like Rogue) of a killer crocodile in Burundi named Gustave.  My biggest problem with the film is how it was marketed.  They, the film studio, sold us a bill of goods by implying that the film was about a serial killer.  A bit of a stretch there.  This one was what Rogue might have been had the producers made the characters one-dimensional stereotypes.  It's serviceable, but certainly not a good film.

That's all I got.  I can't think of any more decent killer crocodile or alligator films.  Oh sure, Lake Placid and Alligator both had direct-to-video sequels.  But I'm talking about original films that were released in the theaters.  I see that Tobe Hooper did a film called Crocodile in 2000, but I haven't seen it.  Has anyone?  I'd like to make sure I'm not missing anything decent in the genre.

And that last sentence may be the saddest thing I have ever written.  Sigh.

Labels: how lame am I

nothing like a big reptile harassing tourists. which one was the gator in the sewers of NYC? Next week I suggest a review of those little killer fish, Piranas. BTW, I still won't swim in lake Placid....

I HATE Alligator's. Even in films! Now I'll have nightmares! *shutter*


Hey, Have a Super Weekend!

2abes - Alligator was the one in NYC. And Lake Placid didn't take place in Lake Placid. It was an unnamed lake in Maine and they mentioned in the film that they were going to call it Lake Placid, but it was already taken. Odd choice to name the film, if you ask me.

Jenn - You are most welcome!

I knew from the phrase "From the Director of Wolf Creek" this movie was not for me.

I have never heard of Wolf Creek.

Although I did like the original Tremors movie, which would fall into the animal eats human category.

and WHO told you about this little gem?

I used to have this re-occuring dream about a big alligator coming at me, and just before he gets to me I wake up.

Man, those suckers are fast.

Sounds like the typical movie where a busty blonde lays out naked to get a tan, and is instantly killed and eaten...How far off base am I ??

Ookami - yeah, but Tremors was mostly for laughs. This one took itself seriously and it was pretty good.

Slyde - yes, you did tell me about it, but the only thing you are superior to me in is gayness. Wait...that sounds like he is a top to my bottom. Scratch that.

Candy - I had a small gator chase me to my golf cart once on Hilton Head in SC. Fuckers can move!

I've only seen Lake Placid. I love the cheekiness of that movie. And Oliver Platt. LOVE HIM.

Alligator/Crocodile movies aren't my typical go to genre, so you'll sadly receive no suggestions from me.

Callie - Oliver Platt = always good. And his brother is a pretty damned good restaurant critic too.

Tremors.. now THAT was a movie worth watching. I could sit and stare at the strangeness of Kevin Bacons hair all night.

Jimmy - Welcome back! I watch Tremors for Fred Ward. Something fascinating about that dude.

You ever see a Fred Ward movie called... hold on, got to look this up... Cast A Deadly Spell? It's great!

badger - I did. It was a made for TV flick and it starred two of my favorite character actors. Fred Ward and Clancy Brown. I would watch any movie starring those two guys.

I'm probably the biggest Tobe Hooper fan there is, but CROCODILE is pretty abysmal.