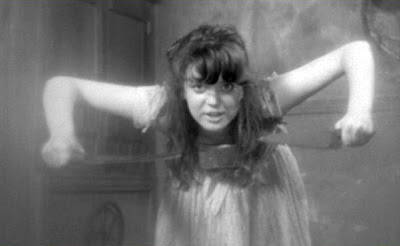 But last week Netflix made the film available for instant streaming so Gia and I were able to watch it this weekend.

The film has fallen into the public domain, so you can all watch if for free in a few places on the Web. Cult Reviews is a good one. Check it out, if you are in the mood from some schlocky horror/comedy fun.

The photie attached is remarkably striking and offers up many wonderful moments of inspiration.

I might have to check that out! Sid Haig is one creepy, creepy guy.

Jimmy - The great thing about the two daughters was how crazy they both were and how beautiful at the same time. They seemed young in the film, but both actresses were in their 20's when they filmed it in 1964.

Avitable - And he was super creepy in this one. In fact, it was Sid Haig that steered me toward this film in the first place. I saw a pic of him as Ralphie and I was creeped out enough to put it on my queue.

2abes - if you don't have Netflix you can watch it anytime on that Cult Reviews site I mentioned.

i have heard of this one, but never seen it.. maybe i'll check it out this weekend.

Slyde - you are going to love that Cult Review site.

I'm still waiting for Wil Harrison to hook up my totally free Netflix account, then I'll get in to stuff like this !

I'm going to have to see that.

One of it's alternate titles is "The Liver Eaters".

Heff - in the meantime you can watch it on Cultreviews.com

Callie - You know what I love? I love when I take the time to put in link to something and one of y'all actually follows it to read about it. Very cool. Thanks!

The Maddest Story Ever Told, not quite of the family friendy variety.

There was a que for this film on Netflix??

Candy - well that's how Netflix works. You either put it on your DVD queue or your Instant queue to watch in the future. The DVDs come in the order they are in on your queue, but you can watch the Instant films anytime you want. This one just became available for Instant watching on the PC or TV (if you have a Roku player or similar device).

Creepy but I can't look away!!

I need to view this!!! Should I bring my mommy?

I've got to see this!

That really, really looks like a movie I'd love.
Thanks for the info!!

That looks like it would be really creepy or really stupid. I can't figure out from your post which one?

Faiqa - You know the beauty of it? It was both. Creepy and stupid. And fun and wonderful and all sorts of other things.

Oh this sounds right up my alley. I'm definitely going to give it a view. Thanks for pointing it out.