When I was in college, about a million years ago, I took a course in Art History. It covered an extremely broad range of styles and eras from Ancient Mesopotamia to modern times. The kind of course you take as a liberal arts requirements when you are really just a computer geek.

There are some things that have stuck with me from that course, however. My appreciation of Caravaggio, Vermeer, Chagall and Dali to name a few.  Another artist whose work I came to appreciate was Francis Bacon.  His painting, Figure with Meat, has always been a favorite.  In fact, it was on the back cover of the text book from that Art History course I mentioned. 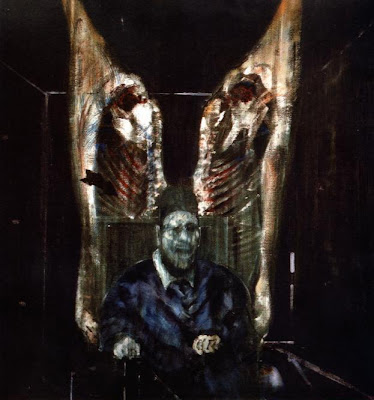 Kinda grotesque, isn't it?  Yeah, a lot of Bacon's work was.  Margaret Thatcher once described him as ""that man who paints those dreadful pictures", but what did she know?  The bisected carcass of the cow always reminded me of a giant mask, lurking over the seated figure...and he just looks terrified.  Who wouldn't be?  It wasn't until much later that I read up on the piece and found out that it was part of a study that Bacon did on a painting of Pope Innocent X by Diego Velázquez. Or that the slack-jawed look of horror on the man in the chair was lifted from a screen shot from the classic silent film by Sergei Eisenstein, The Battleship Potemkin.  Another favorite of mine.

Anyway, I just love that painting.  It makes me feel...uneasy.

I always saw them as wings. Meat wings. A kind of carnivore angel. But that's just me.

sometimes the best art is creepy.

i enjoy the creepiness of this one fer sure!

RW - Carnivore Angel was the original name of this blog. No, it wasn't.

Check your email. I just sent you another "Figure with Meat" that i think you will enjoy.

Slyde - If it's what I think it is, you can keep it. I'm not a fan of steak tidbits.

Coincidence that his last name is, "BACON?" I just don't think you'd have picked him out if he was the artist Francis Quiche....or Francis Salad.

You, my friend, are obsessed.

I never really studied much of his work when I studied art, but I like the stuff I've seen.

Now how weird is that? I went to an exhibition of Bacon Stuff - literally - it was largely assorted material recovered from his studio - the weekend before last at a place called Compton Verney (cool name for a place too!)

Avitable - I never "studied" him, exactly. I just dig.

Wabbit - It's the universe telling us to eat more bacon!

I think the guy looks like he's laughing, really.
But Bacon is awesome. The edible kind, and certainly the artist. My favorite is Klimt, but he's gotten so damn trendy that I need a new favorite.

Sybil - If he's laughing then it's the horrified cackling of the insane kind. As for Klimt, yeah...it was even mentioned on Buffy the Vampire Slayer on episode. Something about trendy freshman hanging Klimt (and Monet) posters on their dorm room walls. Hehehe.

Hmm. I figured you for a Robert Mapplethorpe man, LOL !

You like bacon (the meat candy)
You like bacon infused bourbon
The artists name is Bacon.
There are slabs of meat in the painting.

Bruce - yeah, it's not really that much of a stretch.

I like Bacon's works, and some of the modern artists who have been inspired by him have proven equally interesting. Bacon's works are best experienced in person, so if you can get to a show, it's worth the trip!