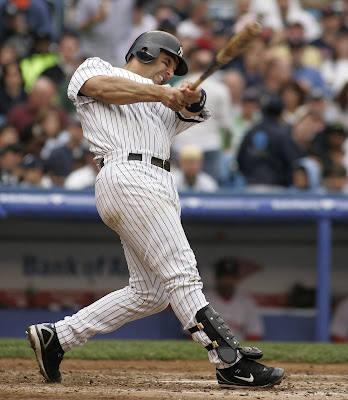 That's Jorge Posada right there. The catcher for the Yankees for the past 15 or so years. I've been thinking about Posada a lot this year while watching the Yankees play. Just like the rest of the Yankees players, I've always rooted for him. But he has never really been a favorite. And I don't know why, because recently I've come to appreciate his game for one very big reason.

Look at him. No batting gloves, no crazy tattoos all over the place, a batting helmet covered in pine tar, a little eye black to take away the afternoon sun's glare. The only way you would know he was playing in a more modern era is the ankle guard he uses on his right foot. Protection from a repetitive injury. That's it. Just a ball player in shirt sleeves gripping the bat ferociously and quietly putting up numbers that may one day get him into the Hall of Fame.

I think Posada would have fit right in with players like Rogers Hornsby or Lou Gehrig or Jimmie Foxx or Joe DiMaggio or Ted Williams. He's that kind of old-school.  He even looks a bit like he could be from those eras with his big dumbo ears.

Plus he's got a bit of a red-ass in him. You don't want to fuck with Jorge. Back when Pedro Martinez was on the Red Sox, he made a habit of beaning guys like Derek Jeter and Alfonso Soriano on a regular basis. After one game in which he nailed both players, Jorge started jawing at Pedro from the top step of the dugout. He pointed at his head and told Pedro to throw at him next time. "Bring that shit to me" as Pedro Cerrano would have said. Martinez jawed back at Posada, as he should have. But he didn't throw at him. Not that game. Jorge would've killed him.

Same thing a week or so ago when Josh Beckett suddenly lost control in the 6th inning of a game and started beaning Yankees left and right. Jorge wasn't playing in the game (after being hit in the knee by a pitch a few days earlier), but he was perched on the top step with his arms crossed just eyeing Beckett. Almost daring him to make a move. A-Rod and CC Sabathia were going a bit more nuts next to him in the dugout, but Jorge's quiet stare spoke volumes. I dig that about Jorge.

There are other guys out there who are like that. Kevin Youkilis and Jason Varitek on the Red Sox are old-school.  I wouldn't mind having either of those guys on my team.  Well, at least back when Varitek could hit a bit more effectively.

He's with the Yankees?

RW - That would be the World Champion New York Yankees, yessir!

Also, Jorge might be the guy I thought was cute.. further research is needed to make sure. Either way, old school rocks.

For all your love of Yankees, understandably and all, I couldn't have been prouder to hear you say Youk and Veritek have your respect. Youk is my "baseball boyfriend" and Veritek is my best friend's. heh. I got to see them play here in Kissimmee during spring training, and it was awesome. Had to share. And to say thanks for saying something nice about my Sox.

"I've been thinking about Posada a lot this year"

also a shocker: That you checked out his feet.

Jorge's always sort of pissed me off. God knows he's been a great offensive player for the Yankees, but his "red ass" antics, as you so correctly put it, often seem to come at the wrong time, or for some stupid reason. Last year there was one occasion where he went out of his way to bump another player after a play at home and touched off a bench-clearing incident that could have gooten Sabathia or Burnett hurt.

He also could have "gotten" Sabathia or Burnett hurt. It's like multi-tasking!

Slyde - Dude, seriously? Let's make a pact. Whenever you see a post about baseball here...just move on. I'll do the same whenever you post about your favorite subject...sucking cock. Agreed?

Limpy - Yeah, that was unfortunate. But I don't think that was typical of Jorge. Usually when he acts up, there is a reason for it. I can't think of another time when he was the instigator.

counter deal: i'll stop busting your ass about your homo-erotic love of baseball on the day you send me a photograph of you so much as throwing a ball.

Slyde - same here the day you show me a picture of you actually slaying a dragon with your plus-12 sword of nerdliness. Geekdouche.

and again, you dodge the real issue with your attempt at wit.

Slyde - I was being totally serious. I like watching baseball even though I haven't played in years. A little softball every now and again, but not baseball. You like sitting around in your friend's basement in your underwear playing D&D games even though you have never gone on an actual quest. Different strokes...

Okay, pardon my ignorance but what is the difference between baseball and softball? I see the Supreme Court nominee is trouble for being in an old pic of her playing softball with short hair (I mean she had short hair when she was playing it.... Oh never mind). this apparently makes her a lesbian and a BAD THING!

Wabbit - Softball is played with a larger, softer ball and, in one variation, is lobbed toward the batter underhanded in an arc. Women's softball at the higher levels is very competitive and they throw the ball very fast. STill underhand, but wow.