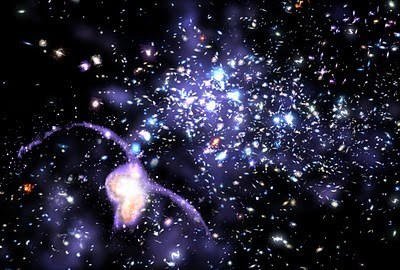 So I was reading about these odd galaxies out there that are mighty old. Older than our own corner of the universe. And they've got these ultraviolet rings of light that make them seem younger than they actually are. I don't understand any of that.

In fact, I have a hard time comprehending our own planet...let alone the solar system or our galaxy or the universe itself. And what if our universe isn't the only universe? What if our reality, our universe, is just a teensy tiny part of a much larger multi-verse? It boggles the mind. Or my mind, at least.

I try to be a learned man, and I understand my place in the cosmos. It's the actual comprehension of that knowledge that eludes me. I start to think about it. Me...on this tiny planet circling this enormous star that, in fact, is just a tiny star. One of billions in our galaxy. Which is one of what? Billions of other galaxies, maybe. That's where it goes ka-phlooey.

In my juvenile mind, I used to think that there was maybe a dozen galaxies floating around out there. Andromeda...that's a galaxy, right? I knew about that one. But how many other galaxies can there actually be? How much space is there in...space?

So I went to look up how many galaxies we have actually discovered. I was thinking maybe a couple of hundred. That seemed about right to me. I mean, they are so far away. Gotta be hard to tag and identify each one of these things. So how many do you think we have identified so far? 100? 500? 1,000? Try closer to 15,000.

And that's just a drop in the bucket, my tiny friends. Just the tiniest fraction of what might be out there. Recent estimates bring the total number of galaxies in the universe at somewhere around 125 billion.

I stand in the backyard at night looking up at the stars and I think about this...and then I get dizzy and I fall down. And it (generally) has nothing to do with what I've had to drink that evening.

Stop talking about my penis.

Can I buy some pot from you?

Those galaxies that try to make themselves look younger than they really are? They're called cougars.

Avitable - I will if you will.

Steph - There's that whole transporting it over state lines issue that we would have to work out. ;)

You know what else confounds me?

It stays hot. It stays cool.

How does it know?

I'm with Avitable. I felt small enough BEFORE I came over here.

Heff - I do what I can to make everyone feel as insecure as I.

Great. My brain is spent for the day.
Thanks, Earl.

Sybil - see my response to Heff above. :)

Can I have an ultraviolet ring? Then maybe I'll look younger and have my wicked way with lots of yiunger women :D

It's when you start reading about things like this you realize how truly insignificant we really are. Well I'm not, I'm awesome, but the rest of the planet I mean.

Wabbit - let me know if it works. Wait...dammit, I'm spoken for. Crap!

Kevin - I think we may actually revolve around you! :)

It's just wrong. My small mind is not capable of thinking that big. It's like, try to capture what infinity is. See, same thing. I'm going back to watching Star Trek The Next Generation reruns now, thank you very much Data.

Kate - my work here is done.

We are small, but significant enough to raise the temperature of our planet a few degrees. So, there's that.