I've been encountering a lot of references to punk rock in my life the last few days.

RW posted about a blogger friend of his who is recovering from some pretty serious surgery. He posted a video from The Ramones in the post as a bit of a get well wish. I've never really been big on The Ramones, but that is a topic for another day.

I watched the film Juno the other night. It included, amongst other references, a discussion on which was better...the punk scene in 1977 or the punk scene of 1993. I would argue that it was kinda over by 1993 and that 1991 was the peak of that particular branch of punk history. That, however, is an argument for another day.

Then I came across this list of the 20 Most Punk Movies of All-Time. I think that many of the films on that list were ABOUT punk and weren't necessarily punk themselves. But that is a...well, you see where this is going?

So I sat down tonight and started to write a post about punk and my own experiences with it. And I only got a paragraph into it when I knew that it was going to be much to long to post in one blog entry. Punk has been pretty important in my life and my mind was racing with what I was gonna write. And there was much too much.

So next week, starting on Monday, you get a full week of PUNK!!! 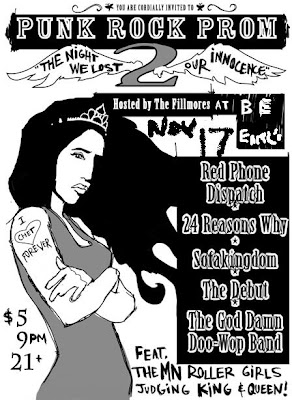 How's that for a tease?

I haven't decided on the daily topics yet, so if you have a broad subject about punk that you would like me to bore you with...please leave a comment.

So next week, put on your best pair of Docs, pierce something and stop on by for a conversation about my favorite type of music. You know you wanna.
Pissed in the corner by Verdant Earl at 12:01 AM

Huh. Desperately Seeking Susan and Pump Up the Volume were "punk movies"? This punk that they speak of must not be the punk that I'm thinking of.. *totally random: it was very difficult for me to end that last sentence with a preposition..so very punk of me.

I don't know that much about punk, but I have grown to love Iggy Pop. Do you think the classic James Dean film, Rebel Without a Cause could count as sort-of the pre-cursor to the whole movement? He was really cool in the punk kinda way, and so was Sal Mineo.

Faiqa - I didn't get "Desperately Seeking Susan" either, but I can kinda see "Pump Up the Volume". It had that certain rebelliousness against authority that fueled the punk movement. So did DSS, but PUTV had a punk-er soundtrack. If that makes any sense. But I know what you are thinking. Of. ;)

MikeB - While it was way to early to be punk, Rebel and the entire rocker movement of the 50's was all about teen rebelling against authority. I don't think you can call it a pre-cursor to punk, because the punk movement came FROM the rocker movement. Just as rock came from R&B which came from...and so on. It's all rock and roll, really.

I'm a little surprised that the Great Rock 'N' Roll Swindle wasn't on the list.
I look forward to next week, though we might have an argument on the Ramones. :)

b.e. i'm more of an indie/alternative girlie myself but i will be with you all next week anxiously reading about and learning about PUNK!!

Now i need to clarify, you mean puck music right, not that fact you are are indeed a punk??

Just saying?? Or asking rather!!!

Hey what did you think about that movie? I also just watched Body of Lies, have you seen that one? I wanted to know your thoughts...

im gonna say that those paintbrush changes you made to that picture took you all of about 7 seconds...

Avitable - That will be in the following week's program. Un-PUNK Week. No matter who she dates or what she thinks about herself. But I understand you've got a crush, so I won't bust on you. Much.

Paticus - That's okay. Everyone I know who is into punk has an issue with my thoughts on The Ramones.

Michelle - I dig on the indie/alternative stuff, but next week it's all about the punk. Music, of course.

Paige - What movie are you referring to? And no...I haven't seen Body of Lies yet. Looking forward to it, though.

Slyde - Thank you for noticing my hard work. And 7 seconds was about right.

DG - I love me some ska. Haven't really gotten into oi! as much. How, um, political do the crowds get at the oi! shows? I know THAT isn't what it was originally all about, but it did degenerate into that for some bands and fans of oi! Just curious. And congrats on the DJing gig. Wish I was around for it.

There were never many racist oi bands to begin with (despite the media image), and these days most of the stiff right arm guys have gone over to shitty metal, so it's not a big issue. Especially around here, because we SHARPs and tradskins chased all the morons off years ago.

The most political I expect anyone to get that night is Pabst vs. Red Stripe.

Nice! And Pabst wins every time in that last battle. My book, at least.

I likey Earlsie.
I dont know much about punk, but one of my favorite authors, Michael Patrick MacDonald, a guy from Boston who wrote a famous book about his Boston family, wrote a second book called "Easter Rising". In the book he goes into great detail about how he lived a punk lifestyle for many years and the bands whoes music helped him to escape his shitty life. Not as good as his first but if you like punk-you'll like this.

Candy - Oh, don't expect any actual learnin'. It will likely be just baseless ramblings of a mad man. ;)

If you were here for it, I'd buy you a birthday Pabst or 5.

Wait, you're dedicating a whole week to ME? Oh oh oh, a different kind of punk. I see.

I remember when Avril Lavigne broke and reviewer kept talking about how punk she was.

To whom? 7 year old tone-deaf girls?

AHAU - She ain't no human being! That's Avitable's baby you are trashing! :)

After that, you gotta buy your own!

How did the cat get so fat?

Well, this should be interesting. I look forward to learning more about punk next week and seeing if I recognize anything.

Iggy will certainly get a mention or two.

Teeni - Like I said to Candy, it will mostly be the ramblings of a mad man.

My boots were from the Army surplus store, not no poser doc martins. They tore up my feet the first month I wore them. I still have the marks from breaking them in. God I loved those boots.

I had 5 piercings, none visible outside of clothing. None in my navel or face, that is for weenies. And the five did not include the ears either. EMPHASIS on HAD.

I have a wee shaved head for about two years. I had bangs though, I would die the whole lot black then use bleaching stripper to turn the whole thing a beautiful shade of orange. I was very cute.

Needless to say, I am looking forward to the punk movie week and am very thankful it is over for me.

This tattoo though, it is still there. Well, actually mine is a cover up from my more punk tatoo. Well, who knew that I would grow out of such things to blossom in more refined ways?

I will forever be a rude girl.


see, this is why i like your blog. I see we have things in common mr.

Holly - Ahhh...rude girls! Love 'em. I got my porkpie hat and wraparound shades somewhere in the back of my closet. I'll virtually skank with ya one of these days. :)