Thanksgiving was fantastic, but it's been a crazy, lazy weekend since then. Crazy as in too much to do and lazy as in not enough energy to do it.

So I sit here on the couch on a crappy, rainy Sunday afternoon in my pajamas with the two cats nestled up right next to me watching Season 1 of Angel on Hulu. Angel always seemed like the red-headed awkward step-child of Buffy, in my opinion. I guess because I preferred Spike as a character over Angel. He was just too...somber, I guess. Except when he reverts to Angelus like in Season 2 of Buffy. THAT was fun!

But I'm giving him and his show another chance. And it's pretty freakin' great! And as annoying as she is, it ain't so bad having to look at Charisma Carpenter's hotness throughout these episodes. Yummy! 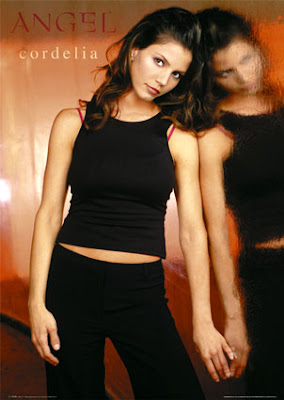 Angel is a great series because it actually lets David Boreanaz do a lot more with his character than he could in Buffy. Also, I am a fan of either silly Angel or Angelus all the way.

I just got done marathon watching the show this season...Cordelia gets less annoying but then the stories get more annoying, haha. In either case, if you ever need more seasons, I have them on my PC and could upload them to my server for you. Also, TNT runs two episodes every day and will probably inevitably catch up to wherever you are!

With a name like Charisma, it's gotta be hot.

Ooooh hulu here i come!! I love hulu!! Even the name hulu is fun and makes you want to dance around for a bit!!

Oh and you are getting that buffy dvd if i win!!! Sorry, its a done deal in my head!!!

Teeni - you mean that isn't the first thing you do in the morning? ;)

Hilly - yeah, silly Angel is fun too! I've seen just about every episode. I skipped a couple here and there, but most of them.

Evyl - and there are some truly hawt pics of her on the interwebs. I picked a semi-respectable one. What was I thinking?

Liz - it's really the only way to watch TV.

ALL of season 1 is there? i think im gonna jump on board...

I'm a big fan of Angel the show, especially the last couple of seasons, with Fred and Lorne and Spike - it's just a more adult version of Buffy, but they went places that Buffy couldn't.

Adam - One problem I had with the middle part of the show was Connor. Hated that kid. But loved Fred, Spike and Lorne in the latter years. Just like you said.

LOOK. I know you said that you like Angel, now. But, I don't know if we can still be friends after admitting that you thought Angel was the "red headed step child" of the Buffy series.

OK. I'm over it. We're still friends. Glad you finally wised up.

I think of them as two sides of the same coin, and I would still claim that S4 of Angel outdoes the correlating season of Buffy, in terms of overall whallop.

Yummy indeed. Thanks for posting the eye candy.