Can you dig it?

We've had the Special Edition of The Warriors sitting on top of the TV for about 3 weeks now, and we finally dusted it off to watch it last night.

I also forgot that this movie was made back in the late 1970's. And about the political furor that came with the several "incidents" of gang-related violence that occurred in the film's initial release. The Special Edition comes with a great 5 part documentary about the making of the film and the establishment of it as a cult classic in some circles. Yeah, I'm in that circle.

The interviews in the documentary were classic. James Remar and David Patrick Kelly were especially fond of the film as it kick started both of their careers playing bad guys. And they were sooo good at it sooo early on.

Several aspects of the film that I never got back in the day were the references to Xenophon's classical Greek tale "Anabasis" about a contingent of Greek Warriors stuck behind enemy lines in Ancient Persia. They had to fight their way back home in a series of monumental battles. Just like The Warriors fighting or evading the Turnbull A.C.s, The Orphans, The Baseball Furies, The Lizzies, The Punks and finally The Rogues. The new cut of the film plays that up a bit more with an introduction that highlights the similarities.

So The Warriors rocks!

I don't care how much brain candy it was. Sometimes you need that. 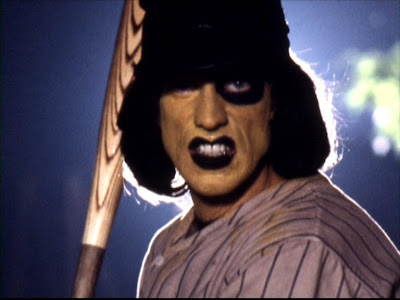 Labels: Come out to play

I've never seen it. It's one that I've always wanted to, but just never got around to it.

It has been one of my favorite movies also. One of the few "stay up and watch to the end" no matter how many times it comes on.

i would like to yell an emphatic bob-the-builder-esque YES WE CAN!!! but alas, i cant. never seen the movie. but on your reccomendation...

Yes, totally awesome movie! in fact, since I'm on vacation right now I think I'll go watch it! I'm guessing I haven't pulled it off my DVD rack in a couple months! woooo

I haven't seen this in years. Nice.

This is really funny. Just a few days ago, I made this flier for the next Punk Nite I'm djing for:

an oldie but a goodie...

every guy will love this movie...

I've never heard of the darn movie. I'll take your word for it tho. Don't know Deborah Van Valkenburgh either but I must agree her name is FUN to say.

Avitable - a week in Charlotte would be a good time to watch it. ;)

Bob S. - Heya! I never see it on cable anywhere. Had to rent it from NetFlix.

Zibbs - It was the first time I had seen it in a while too.

Earlsie...Come out and PLAAAYY!! One hell of a scary good film.

The last picture looks like the Yankees have just signed Madonna to hit in the number 7 position.

It was a great flick. And the Baseball Furies had a great look.

Fluck you b.e. here is another film i never even heard of!!! Sometimes when i come here i leave feeling more stupider than i already think i am!!!

I am never in your loop.

I finally got around to putting your ass on my "wall of weirdos". Sorry it took so long.

Evyl - always wanted to do that for Halloween.

Michelle - Great NYC film. You will love it.

Heff - just as you are thinking of shutting it down. Thanks, man!!!

Awesome movie, haven't seen it in a while will look out for the special edition.

It was a bomb ass movie taken from what almost happened in Chicago with the merger of Vice Lords and BGD.
"Hello baby boppers..." That was one great movie.