Early last year, I was lucky enough to finagle tickets to a tribute show for Bruce Springsteen at Carnegie Hall. I wrote about it back then, and with the heavy weight of almost one and a half years of memory it still remains one of the most magical musical events I have ever had the privilege to attend.

One of the clear highlights was a performance that I will never forget. An elderly black woman in a wheelchair was escorted onstage. No back up singers, no band. Just her and a microphone. She proceeded to do a spoken word version of Bruce's song "57 Channels" that was utterly amazing and poetic. Bruce came onstage at the end of the concert and called it the best version of the song he has ever heard.

The woman's name was Odetta. I didn't really know much about her then, and I'm only just learning a bit about her today. Why today? Because, sadly, she passed away from heart disease on Tuesday at the age of 77.

She meant a lot of things to a lot of people. She was a source of inspiration for artists like Bob Dylan and Janis Joplin. She was a cornerstone of the American folk music revival of the 1950's and 1960's. She was considered THE voice of the American Civil Rights Movement. You can read all about this wonderful woman here in this NY Times article. She was also slated to perform at Barack Obama's Inauguration in January. That would have been pretty sweet, and I would imagine that would have meant a lot to her. The completion of a full circle, as it were. Shame.

The quote that sticks out from the Times article comes from Rosa Parks. She was asked once in an interview what songs meant the most to her. She replied "All the songs Odetta sings." 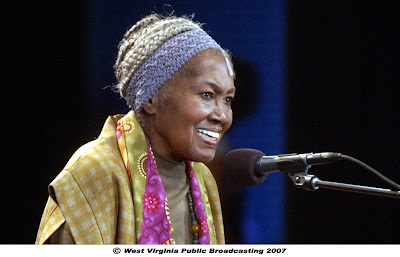 I will seek out her music soon. Post something too.

This is what I am talking about Earl. This right here. My spank hand, it is still.

I agree with Holly, this was an awesome post, Earl. Although I've not heard of Odetta, I'm a huge fan of Maya Angelou whose first autobiography, I Know Why The Caged Bird Sings, chronicles her childhood through the Great Depression.

When you're inspired by the lives and words of people like this, it almost gives you hope for the rest of us, huh?

It is always sad when someone passes on, but i have a feeling that Odetta will be living on in the hearts of those who loved her. AND her music will be here forever!!

You know what i am talking about b.e. Get it done!!!

Odetta was always there in the background of my life. Thanks for that post and I love the variety.

Robin - I saw Maya Angelou speak about her life and her poetry a long, long time ago. Amazing woman.

Michelle - You might not want to hold your breath. :)

MikeB - Did you ever see her perform?

I sucked on the Trivia, but I did it for Odetta.

Being that I'm old and all, I cannot remember my life without Odetta there, somewhere. Being an old Folkie singer/songwriter, I cannot imagine a world without her.

Heff - I had to guess at a bunch of them today. I'm usually pretty good at movie trivia.

Steph - She may be gone, but her legacy continues.

you haven't heard of odetta eh?

this is sad news. but we all pass to the next great adventure at some point.

Mel - I guess in a kind of background way, I had heard of her. But I didn't really know anything about her life before yesterday.